Kiwi Josh Junior has gold in his sights 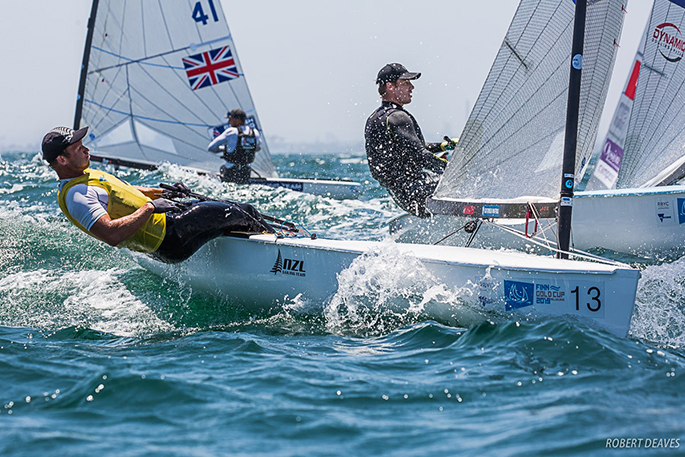 It was a scorching day in Melbourne but Josh Junior kept his cool on the penultimate day of the Finn Gold Cup world championships and is in the driving seat to secure the gold medal.

Josh will take a 16-point lead over Nicholas Heiner of the Netherlands into the double-points, top-10 medal race and needs only to finish in the top seven to become the first Kiwi to win the Finn class world title in the 63-year history of the event.

The 29-year-old also has enough of a lead over defending champion Zsombor Berecz of Hungary in third that the worst he can do is second.

Josh was thankful he had an excellent discard for his worst result of the week up his sleeve - his worst going into today was fifth - because he was 16th in today's first race sailed in a tricky offshore wind and then backed it up with an eighth. A third race had been scheduled but was abandoned as the wind refused to play ball.

The dying breeze wasn't the only thing to contend with considering the mercury had been forecast to reach the highest it had been in Melbourne for 143 years.

"It was bloody hot out there but I'm pretty stoked to be in the position I'm in and looking forward to the final day tomorrow," says Josh. "It's an awesome feeling. It's not quite over but I certainly couldn't ask for much better. It's been an awesome week for me and I'm really stoked to be in this position going into the last race.

"It was just sweltering and the wind was all over the place so I was pretty happy to get through it and extend my lead."

Fellow Kiwi and training partner Andy Maloney is fifth going into the medal race and still has an outside chance of finishing on the podium. Andy was 21st and sixth in yesterday's races and needs to make up 12 points to get among the medals.

"I've let myself with plenty of work to do in tomorrow's medal race," he said. "I'm really disappointed with how I sailed the offshore conditions today and will definitely need to reset before tomorrow [Saturday].

"I'll need to go out there and sail an aggressive race to take the win and then have a bunch of other cards go my way to get up onto the podium. I'll give it my all right up until the end; try to go out with some gun smoke at least."

While Andy will be looking to win the race, Josh's main priority will be to secure a clean start and then keep a close eye on Nicholas.

It could turn the race into something of a match race for Junior, especially as he doesn't really need to worry about any other competitors because of his margin over the rest of the fleet.

"I won the match racing nationals a few years ago," Josh quipped.

Results and standings after day 5 of the Finn Gold Cup at the Royal Brighton Yacht Club in Melbourne yesterday: