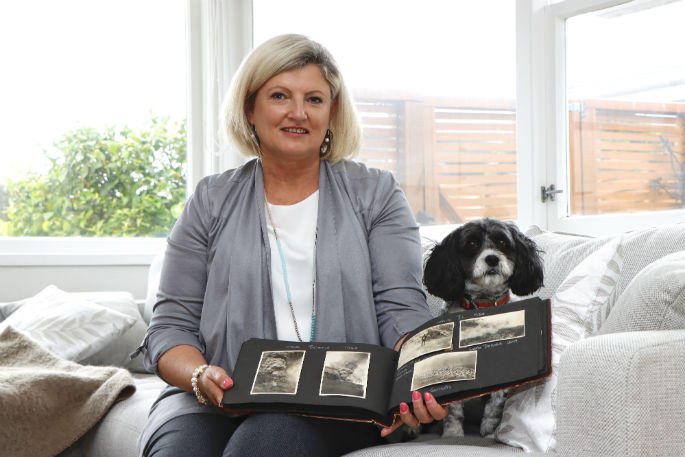 He’s standing staunch, hands on hips, legs spread, open shirt and trilby – looks like a gunslinger. But nothing so dramatic – he’s a sulphur miner.

His name is Wally – with the ‘a’ underscored on the back of the murky black and white photograph dated ‘4-3-30’. Wally, probably short for Walter.

The photo is one of five buried in an old family album, an album retrieved from the cupboard last week, the relevance of which was brought sharply into focus by catastrophic events on Whakaari/White Island.

So little is known of Wally.

“He was an early boyfriend of my late husband’s mother back in the late 1920s, early 30s,” says Merle Bray of Otumoetai.

And Wally was a sulphur miner on White Island.

When Whakaari haemorrhaged at 2.11 pm on Monday, December 9, heaving a devastating storm of steam, gas, rock and ash into the sky, 16 people died, many more critically injured.

On TV news that night, one image of dark smoke and steam plume prompted Merle to dig out the album. The five photos taken on White Island on “4-3-30” – give us an inkling of life on the island and the crazy risk the miners took.

Because even in moments of calm, the island is an ominous beast. And the miners lived with the possibility of an eruption every day of their working lives on the island.

“This is where we work when fumes permit,” wrote Wally on the back of one photo. “Rather warm and unpleasant at times.” And deadly.

Because only fourteen years earlier, 11 miners were killed by what newspapers of the time described as a “disastrous thermal eruption” and powerful torrent of mud and rock, on the mainly undersea volcano. Volcanologists say it has a “respectable-sized” eruption every 2-10 years.

Mining was suspended after 1914 and started up again by Wally and his mates in the late 1920s. And as he scraped a living, Whakaari thundered and raged around him. “Little Donald, another vent steaming well,” writes Wally rather understatedly.

“Right after these photos were taken, all mining was stopped because there had been several eruptions and it was deemed too dangerous to be there.”

Wally defied the volcanologist’s odds and had a charmed few years on the island –arriving after and leaving before any cataclysmic eruptions.

Merle’s husband Peter, a longtime Tauranga builder, was intrigued by the island.

“He raced yachts around the White Island and it fascinated him.”

Like many others, he was entranced by the island’s menace, the lure of a live volcano.

“We discussed it several times. I told him I would go to Whakatane with him, but I was not going out to the island. It spooked me for some reason. I did not want to go.”

So they never did.

In her own way, she too was fascinated by Whakaari.

“No premonitions or anything like. it was just eerie. But I have watched it all these years. Oh, it’s blowing today, or it’s not blowing today.”

And if she needs reminding of Whakaari’s ferocity, she can just break open the album.

There’s also reference to some brave, or silly, gannets on the island. And they weren’t just threatened by the volcano. “A few gannets,” writes Wally.

”The light ones are the old birds and the dark ones the young. The young gannets are more tasty and tender so I am told. I haven’t tried them yet.”

The light was very bad when the photo was taken. Probably a vent grumbling away because it looks like smoke cloud wafting across the shot.

Merle was talking to The Weekend Sun as the bodies of those lost to Whakaari were being brought back from the island.

“Such a tragedy, so, so sad. However the bodies are coming off the island today. Those poor souls are coming home to their families.”

Perhaps Wally can be committed to history again, perhaps the photo album can go back in the cupboard for now.