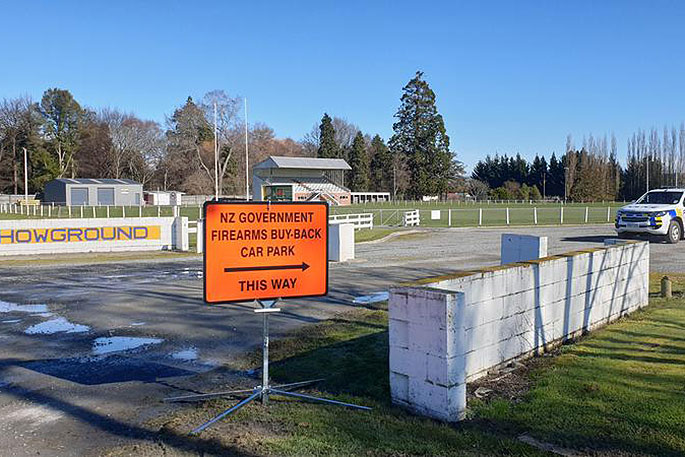 Pro and the anti gun lobbies are uniting and calling for an extension to the gun buyback amnesty.

The official buyback and amnesty for banned weapons ends today, but a lack of records of how many guns have been brought into the country has led to uncertainty over how successful the buyback has been.

Police were set to hold 22 collection events in towns and cities from Kaitaia to Invercargill today between 8am and 8pm, with the amnesty ending at midnight.

Police said about 50,000 firearms had been handed in since the buyback started six months ago.

Council of Licensed Firearms Owners spokesperson Nicole McKee says that represents less than a third of the 170,000 semi-automatic weapons estimated to be in circulation in New Zealand.

"The collections themselves, is a failure. We could see that some time ago and it's actually disappointing to have to acknowledge that it still is. We expected 170,000 firearms to be handed in, and there's still going to be well over 100,000 still in circulation."

Nicole says the 170,000 estimate was from customs data for imported guns and an estimate of 40,000 firearms already in the country.

The buyback had been rushed and her members needed another six months so that the amnesty had the best possible chance of gathering up the thousands of prohibited weapons still sitting in peoples' gun safes, she says.

"It's imperative that there is an amnesty that coincides with education to the firearms license owners to let them know it's not just about semi autos. We don't want to see our members being prosecuted and sent to jail as the government keeps telling them is going to happen."

Gun Control New Zealand's Hera Cook, said many had tried and failed to get a handle on the number of banned weapons already in New Zealand, and Colfo's estimate was just as unreliable. "We don't know how many guns were in New Zealand to start with. It doesn't matter how much information we have about how many guns have been added on. We are not going to know the answer."

Hera agrees with Colfo on the need to extend the amnesty and pointed to what happened in Australia after the Port Arthur massacre.

"They didn't just have the one buyback. They had amnesties later on down the track and they got something like 20 per cent of all firearms in Australia."

Police have previously said the amnesty would "effectively" be permanent, with deputy commissioner Mike Clement saying police would not - in the right circumstances - prosecute people bringing firearms in.

'Just do the right thing'

Police Minister Stuart Nash was in no mood to extend the amnesty.

The Colfo estimate on the number of semi automatics in New Zealand was an exaggeration, he says, and the 50,000 that had been handed in represented a good result.

"No one has any idea of how many firearms are out there and people say 'well, we've had to look at data, we've extrapolated that -' it really is pie in the sky sort of stuff.

"I look more at the number of Kiwis to participate in this as opposed to the number of guns out there. And about 15 per cent of the firearms owning community [that have taken part] feels about right to me." He had a warning for those considering hanging on to banned weapons.

"You can flip a coin. If it lands on tails, then you probably won't get caught, if it lands on heads and we catch you you'll not only lose your licence and your firearms, you face a good chance of losing your freedom because the penalty for having one of these banned firearms is maximum five years in jail.

"Don't take a chance with this. Just do the right thing and hand them in."

As well as the collection events being held today, gun owners can also hand their weapons in at their local police station.

Police have previously also said further waves of buyback events and amnesties were likely, much like the series of collection events Australian police held after the Port Arthur massacre.