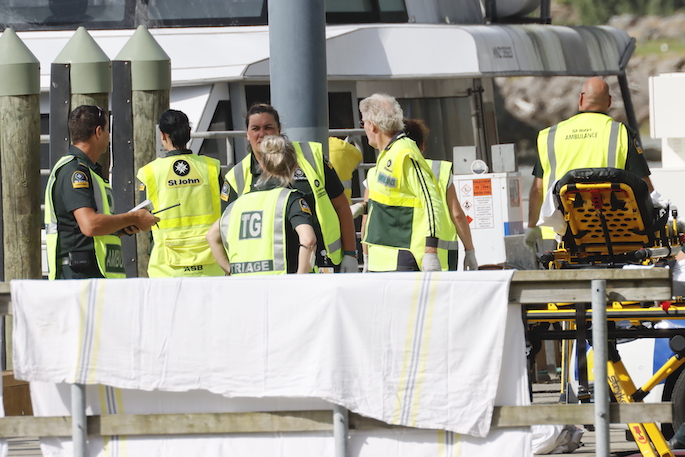 Local GPs, health boards around the country and specialists from Australia are stepping up to help out.

The eruption Monday, December 9, left 16 people confirmed dead, while searches continue to look for the bodies of two people who remain unaccounted for.

For those still alive after being caught in the eruption, 14 remain in four hospitals around New Zealand, with 10 still in a critical condition.

Another 13 were transferred to hospitals in Australia, where one died.

Whakatāne Hospital pastoral care coordinator Fiona Miller says her colleagues appeared to be coping well and getting on with their jobs, but the influx of severe injuries is likely to be causing them exhaustion, anxiety and problems with sleep

After at least four doctors multiple other nurses and specialists took time off on stress leave, Fiona says people from near and far are answering the call for help.

Australasian College for Emergency Medicine president John Bonning has arrived from Waikato Hospital, which he says is stretched coping with eight victims admitted.

At Whakatāne Hospital, where most patients went, he says staff are feeling shell-shocked.

"They've had a challenging year with next to no staff, limited resources and not insignificant pressure, as all emergency departments around the country are under. It's just been possibly the straw that broke the camels back, this particular incident.

"They did tremendously well in receiving up to 30 critical patients. It's just very, very tough on them."

Fiona says Whakatāne Hospital staff acted heroically in the hours after the eruption and little could have prepared them for what happened.

"Despite all the planning and organising people do around having a trauma response, it was a huge event with a lot more trauma and badly affected patients than ever expected."

Fiona says there are psychologists de-briefing stations, chaplains, Māori health services and offers for free ongoing support at Whakatāne and Tauranga hospitals to support the staff.

The health board had consulted with experts in Christchurch, who supported medical staff after the March 15 mosque attacks, and there is support coming from unions like the Association of Salaried Medical Specialists.

In a statement, its executive director Ian Powell acknowledges how "deeply affected" some staff would be.

"Understandably, many of the staff are under severe stress. We have been speaking with the DHB to ensure that arrangements are in place for people to take the time off they need to recover and access extra support and counselling if required.

"One specialist at the hospital said staff were still trying to process what happened and the impact will be felt for a very long time."

In the meantime, John says people beyond the hospitals could help ease pressure on staff by preventing avoidable visits to the emergency department this festive season, by planning their healthcare and going easy on the partying.

"If you have diabetes, if you have asthma, if you have any one of a number of chronic medical conditions please plan your care so you won't become unwell and need to present at emergency departments."

Long road to recovery for patients

Middlemore Hospital chief medical officer Pete Watson told Morning Report that on behalf of the staff he'd like to thank all the medical teams and staff who were treating the Whakaari/White Island patients.

"It's tough and it's relentless, it's challenging because of the heat and the temperatures and the rooms they work in and they're all gowned up but also because of the psychological challenges they are facing.

"We have teams now who are rotating, we've had a lot of volunteers and we really want to say thank you to the people who have come to help, locally but nationally and internationally, that's providing relief."

Pete says they've also got EPA and psychologists to support families of the patients as well as staff.

"This is not going to stop, this is going to go on for weeks if not months for some of these people ... so there will be continued focus on ensuring that we look after our staff as well as the people that they are treating."

Some of the patients will undoubtedly have their lives changed by their injuries, he said, with some suffering more than 50 percent burns as well as other injuries due to the toxic gases they were exposed to and the impact of the blast.

"These are devastating injuries that many of them suffered so round-the-clock efforts to continue to support them but recovery is a long way off for some of them.

"It's quite a long time to actually come through this and to be able to determine the extent of the injuries and many are requiring quite intensive care at a level that's often beyond intensive care that's provided for other patients [that have not suffered burns].

"Certainly not only will they face physical challenges, but the psychological challenges as well and for some of them they will have lost loved ones as well, so there's grief and trauma of that to deal with as well."

However, Pete says they are optimistic about people making recoveries.

"It's a day-by-day situation ... but we are hopeful that with the level of care we can provide and the expertise that everyone will get through this but there are no guarantees."

What a credit to your hospital, community and country. I cannot imagine the stress of the situation, the condition of the poor patients, the expectations you have all worked through since the eruption. You well deserve a break. Thank you for your efforts