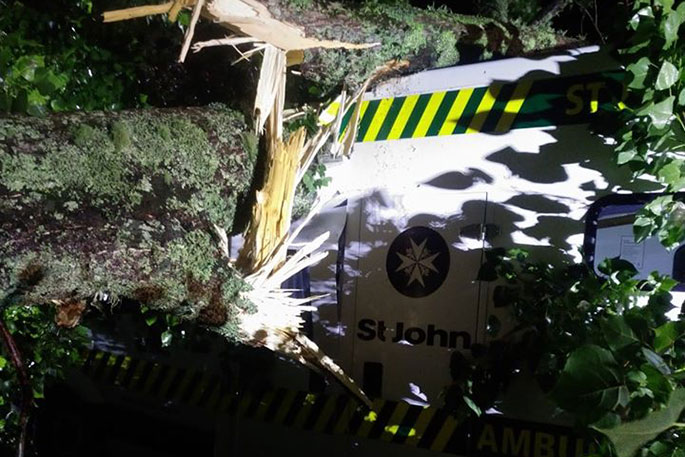 No one was injured when the tree came down on an ambulance in the Bay of Plenty. Photos: Ohope Volunteer Fire Brigade/Facebook.

Wild weather seen in the Bay of Plenty overnight, is expected to continue today.

SunLive has received reported of trees being uprooted, including a possible tornado uprooting a tree in Memorial Park overnight.

An ambulance was crushed when a tree fell on it in Ohope. A police spokesperson says there was no one injured.

“We have a report of a tree coming down on a vehicle on Ohope Road, Maraetotara. 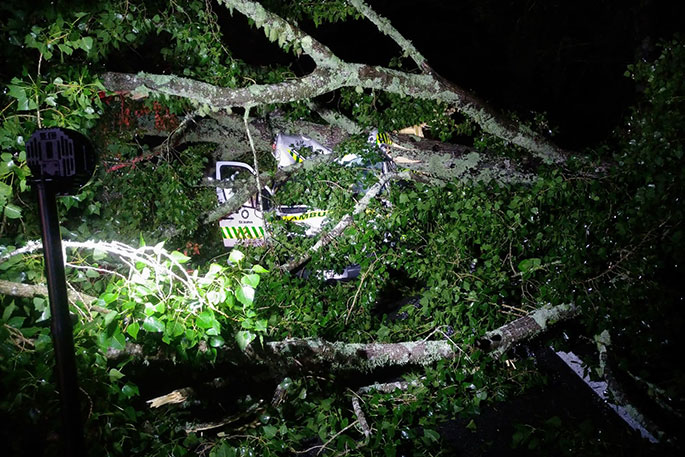 A severe weather watch for heavy rain and strong winds remains in force for the Bay of Plenty.

The MetService says a complex low pressure system over central New Zealand is delivering rain and strong winds to many areas.

“An associated front continues to deliver a period of heavy northerly rain to Bay of Plenty and the central North Island high country. Meanwhile, a period of southeasterly rain is forecast for some eastern parts of the South Island.

“In addition, a period of strong west to southwesterly winds are expected for parts of the upper North Island and also about Banks Peninsula and the Kaikoura Coast on Wednesday.

“People are advised to keep up to date with forecasts as some areas on watch may be upgraded to a warning, or additional areas may be placed on watch.”

Area: Canterbury High Country, Canterbury Plains south of the Rakaia River, and the ranges of Westland
Valid: 9 hours from 8pm Tuesday to 5am Wednesday
Forecast: Southeasterly rain, heavy at times, and amounts may approach warning criteria.

This ambulance needs to be taken to the DOCTORS for a checkup and repair,my thoughts only ,golly they are lucky this could have ended up different, these people need a meddle for the AWESOME work they do,see a lot of stuff lots we the do not see, keep up the good work you guys,take care from The Old Trucker,10-4 out, phew. also thankyou to to Sunlive for all the Good work and reporting in 2019.