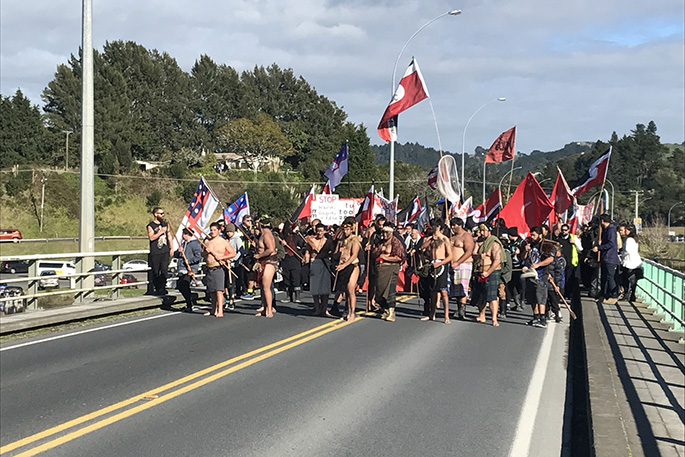 Protests being held earlier this year in relation to the claims. Photo: Rosalie Liddle Crawford

The Waitangi Tribunal has found the Crown acted inconsistently with the principles of the Treaty of Waitangi by failing to undertake a sufficient overlapping claims process concerning redress offered to Hauraki iwi as part of their proposed Treaty settlement.

For Ngāi Te Rangi, Ngāti Ranginui and Ngātiwai, whose interests overlap with Hauraki, the consequences have been profound.

The report resulted from an urgent hearing into claims brought by four iwi: Ngāti Ranginui and Ngāi Te Rangi (both iwi of Tauranga Moana), Ngātiwai (whose area of interest extends from the Bay of Islands to Matakana in Mahurangi, including several offshore islands) and Ngāti Porou ki Hauraki (whose key interests lie on the Tai Tamāhine coastline of the Hauraki district).

“As such, their experiences and claims were distinctly different from the other claimants,” says a statement released by the Waitangi Tribunal.

“Although they argued they too were prejudiced by Crown policies, processes, and practices, and did not receive a fair redress offer, the Tribunal considered that Ngāti Porou ki Hauraki’s claims were not well-founded. The reasons are set out in Chapter 6 of the report.”

However, the Tribunal found that Ngāti Ranginui, Ngāi Te Rangi and Ngātiwai – whose experiences of the Hauraki settlement process had much in common – were all prejudiced by the Crown’s actions.

“Over several years, the Crown failed to properly consult and share information with them over redress it was proposing to offer Hauraki.

“The Tribunal heard compelling evidence of ‘consultation’ that was cursory or far too late, of repeated and sometimes fruitless requests for information that the Crown should have provided without being asked. Iwi described being excluded from discussions over redress in which they clearly had overlapping interests,” says the Tribunal.

“Ngātiwai, for example, were shut out of discussions over redress on Aotea/Great Barrier Island until very late in the Hauraki settlement process.

In some cases, claimant iwi agreed to certain redress items being provided to Hauraki, only to discover later that the Crown had offered something more, or different.

A key issue for Tauranga Moana iwi was a provision in the Pare Hauraki Collective Deed of Settlement allowing Hauraki iwi to participate in the Tauranga Moana Framework – an innovative co-governance mechanism for managing and protecting the Tauranga harbour.

Over many months, Tauranga Moana iwi strongly opposed Hauraki representation on the Framework governance group, saying their interests in the moana had not been established.

But just days before the Hauraki collective deed was initialled in December 2016, Tauranga Moana iwi discovered by chance that it contained a clause preserving Hauraki iwi’s ability to participate in the governance group.

“The Crown refused to remove the clause, and it was one of the catalysts for the claimants seeking an urgent Tribunal inquiry.

“Moreover, the Crown has persistently failed to amend or update it in light of previous Tribunal findings.

“The Tribunal has repeatedly recommended the Crown to set out more clearly how it manages its relationships with parties other than settling groups, and called for the policies and practices documented in the Red Book to be Treaty-compliant and fair. Yet it remains essentially unchanged.”

Instead, the Tribunal found, the Crown chose to adopt an “ad hoc, opaque and ever-changing pool of settlement practices”. 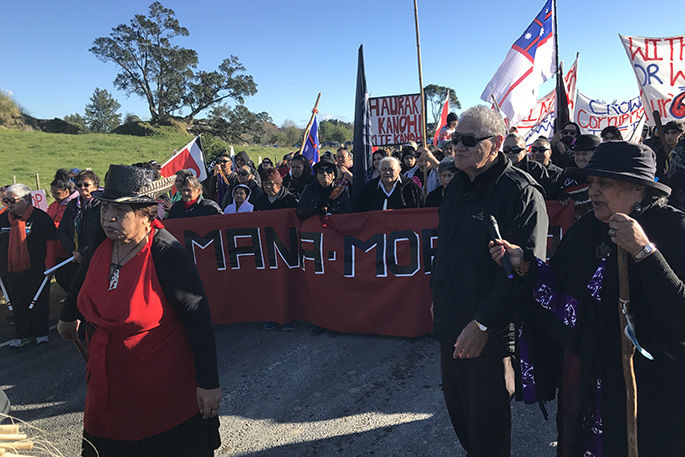 Some were at odds with the Crown’s own policies and/or inconsistent with Treaty principles.

As the Tribunal commented, at key times the Crown prioritised speed over due process in the Hauraki settlement process.

The legislation should not proceed until the contested redress items have been through a proper overlapping claims process, says the Tribunal.

Secondly, the Tribunal urges the Crown to fully commit to and implement Treaty-compliant policies and processes in settlement negotiations.

Tikanga-based resolution processes should be used to clarify overlapping interests and work through any redress disputes.

Consultation and information-sharing must be thorough, timely and transparent, especially when the Crown is dealing with parties other than the settling group. And the Red Book must be amended to fully express the Crown’s commitment to a Treaty-compliant approach to settlements and explain how it will be implemented.

The Tribunal notes that the full title of the Red Book includes the words ‘Ka tika a muri, ka tika a mua’ (‘Healing the past, building a future’).

If the Crown wants to avoid continuous litigation, adverse Tribunal findings, and delays to its settlement programme, the Tribunal says it must now turn this admirable sentiment into practical action.

“The Tribunal said the Crown acted inconsistently with the principles of the Treaty and that it created fresh grievances in the way that it treated overlapping claims in the Hauraki negotiations.

“Having found Ngai Te Rangi has suffered lasting prejudice, the Tribunal said the Crown should not give effect to the Hauraki settlements with the contested redress included.”

A team from Ngai Te Rangi will now undertake an analysis of the full report before commenting in detail.

Paora says efforts will now be made to advance carefully forward through discussions with the Crown.

“Priority will be given to talking with our people and discussing the process forward.

“As each year, each month, and each week went by we lost several of our treasured kaumatua who passed before seeing the light of this report. There is no doubt they will be smiling their grace upon us.

“Planning will now take place over the coming weeks, but our hope is our iwi and the Crown develop a rejuvenated relationship based on mutual respect.

“The Waitangi Tribunal report creates an environment within which to look forward and to get relationships back on track.

“We thank the Waitangi Tribunal for their considered report.  We wish everyone a happy, fulfilling and safe Christmas season.”