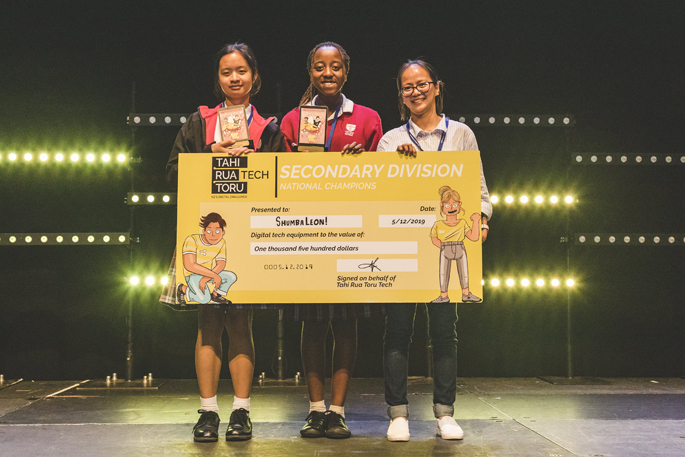 A Bay of Plenty school has picked up a major win at the national finals of the Tahi Rua Toru Tech in-school challenge this year.

As part of the Tahi Rua Toru Tech Challenge, teams of 3-4 students find a problem in their local school or community and use digital technologies to solve it.

Teams are paired up with tech industry mentors and given support and resources.

More than 6500 students participated in the challenge this year.

John Paul College team ShumbaLeon won the Secondary level, years 9-10, by creating a website showcasing cultural diversity in their school and a platform for students to share their own stories and culture with other students.

The judges thought the project was hugely inspirational and was making a difference in their school.

At the discovery level, years 0-5, Hāwea Flat School's team Happy Hawea took out the title, completing a set of challenges in the fastest time. It came down to split-seconds in the end and was hotly contested.

Morrinsville Intermediate's team Thunderbolts took out the first challenge, years 6-8, creating an app game to encourage fitness by getting the user to move around Morrinsville to scan QR codes whilst seeing the 'Herd of Cows' sculptures on display in their town.

Sacred Heart Girls College, New Plymouth's team Red took out Senior Secondary, years 11-13, creating a medication box that sends bluetooth messages to your phone to remind you to take your medication, and has a motion sensor and lock and software designed to reduce under or overdosing.

The 2019 national winners were announced at a gala event at TSB Arena in Wellington, following 10 regional finals held across New Zealand in October.

The national finals were attended by the regional winning teams with students coming from around the country.

The Ministry of Education’s deputy secretary for early learning and student achievement, Ellen MacGregor-Reid helped announce the winners and was seriously impressed by the level of innovation.

“A huge scale of learning has clearly gone on in the challenge. The majority of the students didn’t know how to write any code at the start – and yet that was such a stand-out feature of the innovations I’ve seen.”

As part of the national finals, the Digital Technologies Teachers Aotearoa and IT Professionals New Zealand recognised an influential teacher who has made a huge difference to digital tech. This year the Ali Chivers Teacher Influence Award went to Julie MacMahon from St Hilda's Collegiate School in Dunedin.

“I've known Julie for several years, working with her on bringing about the changes to the digital technologies curriculum. She's an inspiring and energetic teacher who contributes so much to her students and their profession,” says Paul.

The challenge will enter its third year in 2020 and is part of a suite of resources and tools to help teachers and schools implement changes to digital technologies and hangarau matihiko in the curriculum in a safe and supported way.