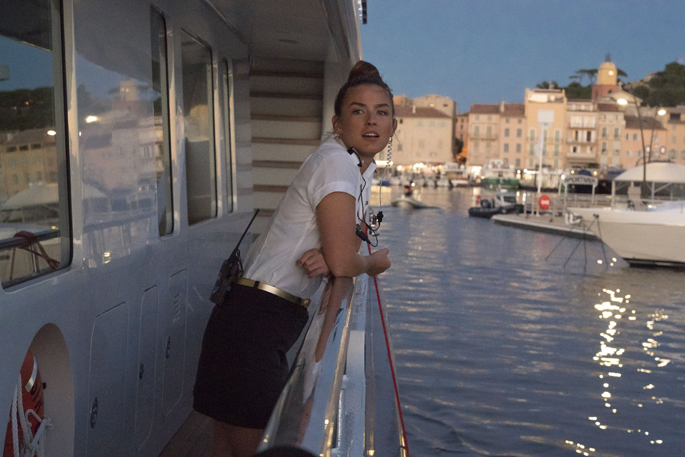 From growing up in Tauranga to staring in reality TV show Below Deck, some would say Aesha Scott is living the dream.

She has been back in New Zealand for around a month and has already started a podcast with Bravo New Zealand host Cassidy Morris, talking all about the latest Below Deck season.

The podcast, Going Overboard, will see the women talk about each episode as the drama unfolds, dishing their unfiltered opinions on all the hook-ups, hiccups and harbourside antics.

“We’ll have a chat at the start, and then each episode we’ll be talking about an episode of the series and then at the end, there is an ‘Ask Aesha’, where listeners can write in and ask me a question about whatever.

“It doesn’t have to be about the show. It can be them asking about relationship advice or just whatever they seem curious about.”

The idea of the podcast started when Bravo Australia emailed Aesha asking if she wanted to be a part of it.

“It was so amazing. I moved home about a month ago and prior to that I was saying I really wanted to start a podcast, but I didn’t know how to record things or how to edit things or anything like that.

“And then a week before I came home, they emailed me and they were like ‘do you want to do this podcast?’

“It was perfect timing. They help us put together talking points, and they’ve organised a guy in the North Shore who’s got a studio. So he records everything for us and cuts it and edits it.

“So it’s a whole team effort behind it, but I’m just so grateful that this is my first podcast that I’m doing because it’s such good practice. Eventually, I’d really like to do my own podcast, but it’s just nice to have this as a practice one.”

Before Aesha was on the Below Deck reality show, she had finished university in Wellington, moved back to Tauranga, and was managing a store in Papamoa. At the time, her sister was also working in a pharmacy in the Mount.

“We were both just at this point in our lives where we didn’t really know what to do. I obviously didn’t want to manage a store all my life and she didn’t want to be working in a pharmacy.

“She literally just called me at work one day and told me about this yachting thing, and she was like, we should just do it.

“It was very spur of the moment, impulsive thing, which turned out to be the best decision of my life.

“It just shows you always should listen to your gut.

“And it was so nice being able to do that with your sister because I feel like when you become an adult, you don’t have that many chances to do such a change of life with a sibling because everyone is on their own paths,” she says.

Aesha says it was her friends who were behind the idea to get on the show.

“I’ve got my good friends from school who’ve always been like ‘You need to be on TV’. So they are always trying to find me applications for things.

“One of them, who also is in yachting, managed to track down the email for the casting agent who deals with the Below Deck casting.”

And the rest is history. Aesha starred in season four of Below Deck Mediterranean which first aired in June 2019.

Aesha says growing up in Tauranga were the best years of her life.

“I’m such a Tauranga person, I just love it so much. If it wasn’t for the fact that I want to be working in media, which kind of has to be in Auckland, I’d be back there so quick.

“My memories of it are just so social and everywhere you go, you’re saying hi to people. You know your community and you know your neighbours. I just like that sense of community that we had and obviously our really long hot summers.

“It was just the best place in the world for me to grow up.”

For 2020, Aesha has a few things in the works but is still trying to make a name for herself.

“To be completely honest, cause I’ve only been back here a month, I’m still kind of settling in and trying to make a name for myself because probably like 90 per cent of my following is from the states.

“So I’m just trying really hard now to form roots and relationships here and try and move my following over to New Zealand in the hopes that will create more roles for me here.

“It's early days so I’m still trying to carve my path here.”

Viewers can tune into Below Deck on Bravo Thursdays at 8:30pm or stream on ThreeNow and then catch up with the Going Overboard podcast co-hosted by Aesha Scott and Cassidy Morris on Fridays available via Apple Podcasts, Soundcloud, Spotify or your favourite podcast app.