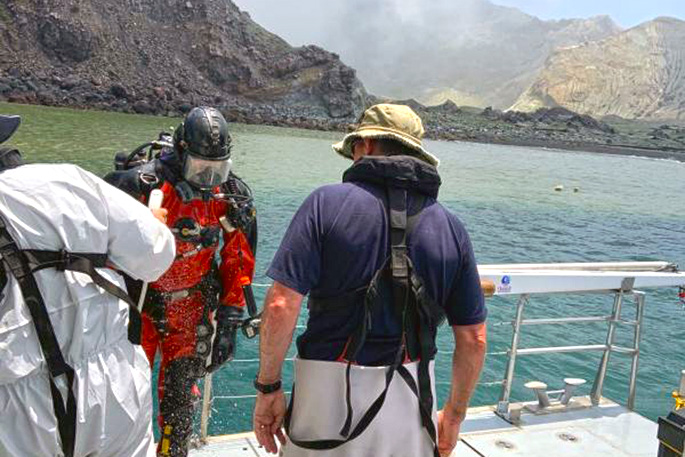 A member of the dice squad preparing to enter the water as the search continues for two missing people around White Island. Supplied photo.

So far, 16 people are officially dead following the eruption at 2.11pm on Monday, December 9.

National Operations Commander Deputy Commissioner John Tims says the two teams of four Police Search and Rescue and Disaster Victim Identification specialists searched a water course on the island where the best information suggested a body may be on Sunday.

"While it is most likely that the two remaining bodies are in the water, we need to be sure.

"Police will now consider how best to proceed, weather dependant the Police National Dive Squad will be out again today."

John says this is a difficult and ongoing task.

"While it is frustrating not to have located the remaining two bodies, I’d like to reiterate our commitment to doing all we can to provide a sense of closure to the grieving families.

"I'm pleased there have been two trips to the island, and that Police and NZDF staff have come back safe and well, given the physical and mental challenges involved in this operation.

"I’d like to thank them for their dedication, professionalism and willingness to step up when required."

He says there are a number of staff working on the identification process in Auckland, staff are being supported while working on this confronting task.

"Our staff and partner agencies continue to work tirelessly as we approach one week since this tragic event and I wish to thank them for their dedication."

Meanwhile, police have released more names of those who have died as a result of the Whakaari/White Island eruption.