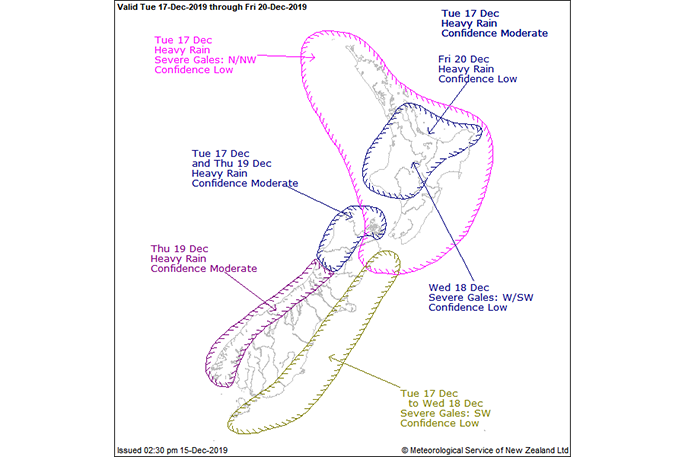 The NZ MetService have issued a severe weather outlook for Tuesday through to Friday.

A large low will move across south-eastwards New Zealand on Tuesday, preceded by rain and northerly gales. This will be followed on Wednesday with widespread showers and cooler south-westerly gales.

“On Thursday and Friday, a front is expected to move onto the country from the Tasman Sea,” says a MetService spokesperson.

Over the North Island on Tuesday, there is a general low confidence of severe north to northwest gales and significant heavy rain.

From Auckland to Wanganui and eastwards to East Cape, however, there is moderate confidence of rainfall accumulation meeting warning criteria.

Over the South Island, there is moderate confidence of significant heavy rain for Buller, Nelson and the Marlborough Sounds on Tuesday and Thursday. On Thursday, this extends to Westland and Fiordland.

There is low confidence of severe northerly gales for Marlborough on Tuesday.

From Tuesday to Wednesday, southwest gales are likely to spread up the east coast, and there is low confidence that they may become severe.