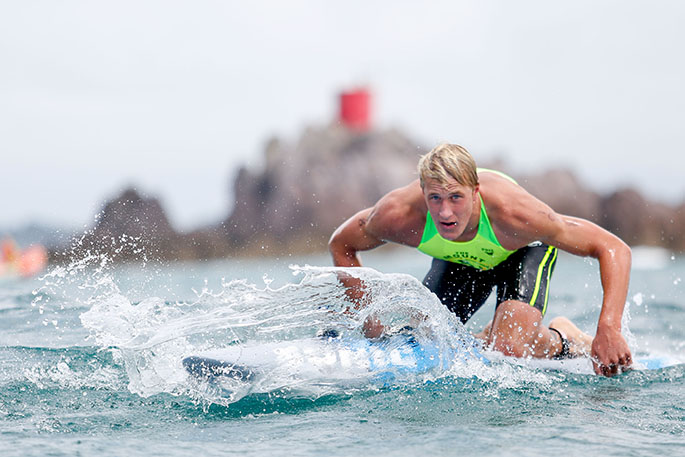 Gisborne's Lachie Falloon on his way to second in the Mount Monster. Photo by Jamie Troughton/Dscribe Media

Joe Collins became the youngest-ever male winner of the Dexion Mount Monster on Saturday but the 17-year-old best keep a close eye over his shoulder in years to come.

The Fitzroy teenager backed up from his runner-up finish last year with a dominant win, on a dramatic day fuelled by big swells and hot competition. He was joined on the winning podium by fellow Taranaki lifeguard Claudia Kelly, who collected her first title in style as an 18-year-old.

Collins eased home in 2hrs 29mins 32secs, more than 3mins clear of his nearest rival. His nearest rival, however, was 15-year-old Gisborne prodigy Lachie Falloon, who managed to pull away from 2017 champion Hamish Miller on the final board leg for an outstanding debut. 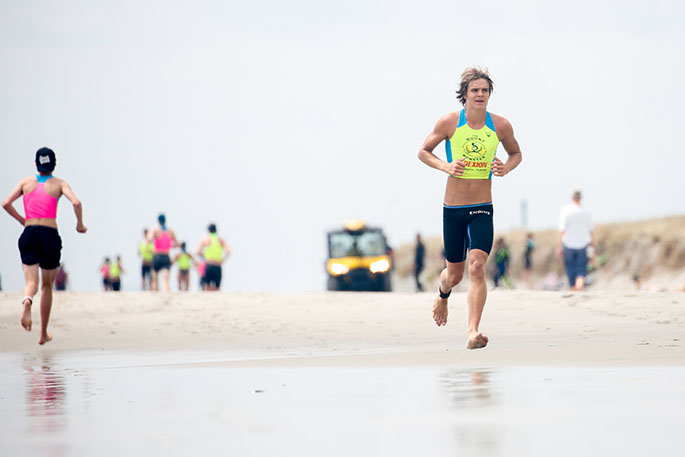 Fitzroy's Joe Collins during the run leg of the Mount Monster. Photo by Jamie Troughton/Dscribe Media

Collins has been based in Australia for much of this year, training with the Northcliffe club 14 times a week under the auspices of fellow Kiwi and former New Zealand star Kevin Morrison, and the work paid off in some style.

"I was so close last year - just to get it this year and I'm so stoked," Collins said. "I love coming and doing the Mount Monster because it just gives you such an endurance base for the rest of the year and then I can get into the sprint stuff for the rest of the under-19 season." 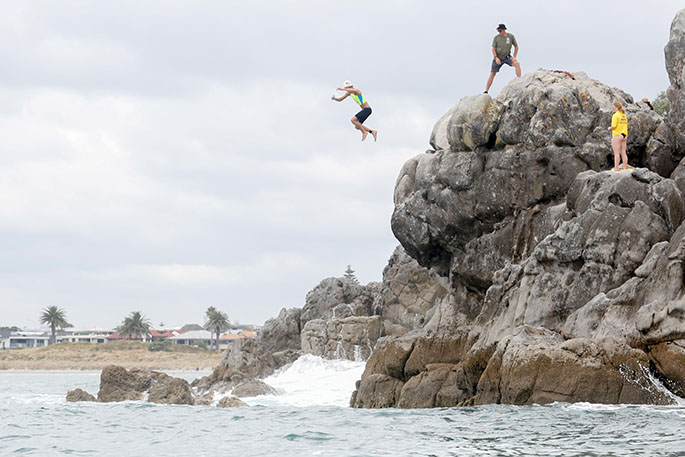 Fitzroy's Joe Collins jumps off the end of Moturiki Island on his way to victory in the Mount Monster. Photo by Jamie Troughton/Dscribe Media

Falloon, meanwhile, is still in the under-16 age group and is coached by New Zealand's greatest ironman, Cory Hutchings.

"I'd almost decided not to do the race but Cory told me I should give the individual race a go," Falloon said. "It gave me something to train hard for pre-season and he just kept encouraging me to give it a go. Then I pulled my calf two weeks ago and I've been having heaps of physio so it was last-minute that I came through to do it - it turned out pretty good!"

With a record field of 363 surf athletes tackling the 24.5km, four-leg epic along the Mount Maunganui coastline, organisers stepped things up by changing the order of legs for the first time in seven years, promoting the 12km ski to start proceedings.

With 2m set waves sneaking through, it made for a spectacular show, especially as the ski paddlers turned at Omanu for the return leg. Collins, Miller and Ollie Puddick led the initial charge and Collins survived being washed off his ski at the turn to pick Miller up and pass him in the final kilometre. He then eased away on the run and swim and was never really challenged, while Falloon kept picking off his rivals in a remarkable show of youthful stamina. 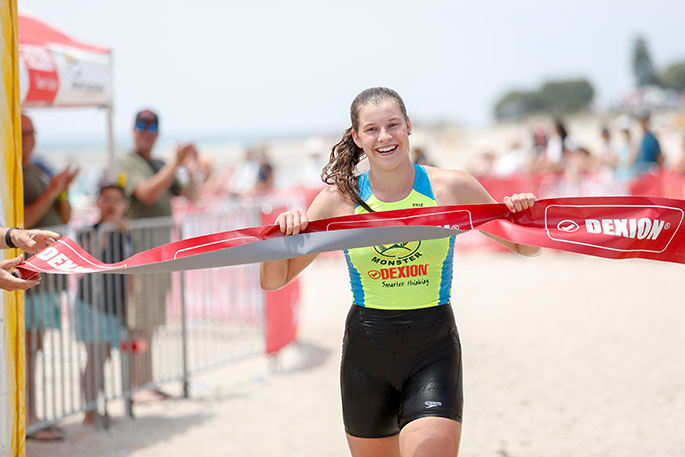 It was a similar story for Claudia Kelly in a stacked women's race. She jostled for the lead with defending champion Ella Kingi (Otaki) and former professional star Devon Halligan for large parts of the ski leg, before joining young East End teammate Julia Padrutt in the lead on the run. Despite a wobbly ankle, she managed to keep stretching her advantage, finishing in style by catching a bomb on the final board leg into the beach.

"It's just such an achievement to do the whole thing myself," Kelly said. "I've been injured the past few years but I'm just so stoked to take it out today."

Her celebrations were fitting on a scorching Mount Maunganui day; she headed for the nearest ice cream shop for a five-scoop special.

And like Collins, she's also aware of the younger generation quickly filling the void behind her.

"It was so cool to see so many girls out there, giving it a crack, especially the young ones. We've got a lot of talent coming through and I'm actually pretty nervous about racing under-19s this season."

Kelly's time was 2:44:37, good enough for 11th overall and 4mins faster than Kingi. Mount Maunganui's Olive Pearce overcame a badly-damaged ski to finish third, easing past Padrutt on the final board leg. 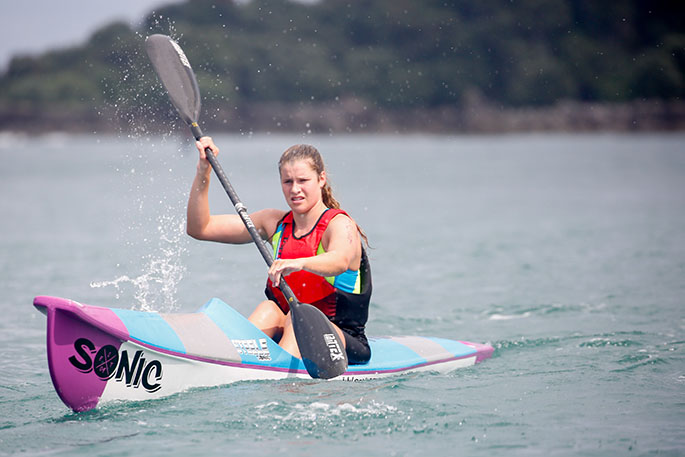 Claudia Kelly (East End) on her way to victory in the Mount Monster. Photo by Jamie Troughton/Dscribe Media 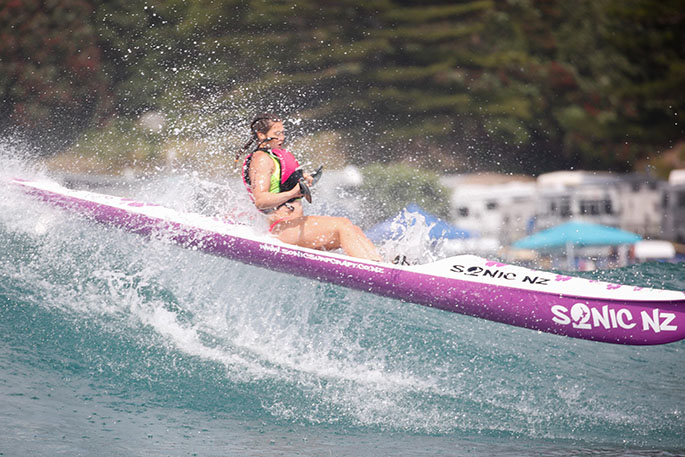 Piha's Liana Sykes heads out through the big swells on the ski leg of the Mount Monster. Photo by Jamie Troughton/Dscribe Media