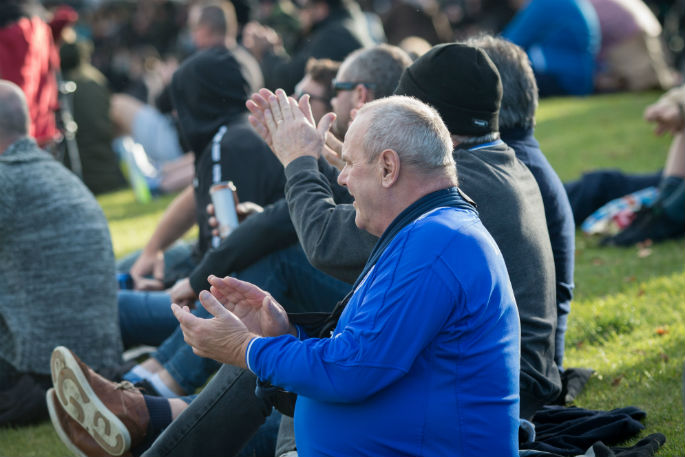 Bay of Plenty supporters will be turning out at the TECT National Seven’s Tournament to get behind the local teams this weekend. Photo: Cameron Avery.

Men’s and women’s sevens champions will be looking to go back to back at this year’s TECT National Sevens tournament in the Bay of Plenty.

The top 28 men’s and women’s sevens teams in the country will battle it out at Tauranga Domain, to be crowned national champions this weekend.

Tournament hosts, Bay of Plenty have a men’s and women’s team competing in this year’s event.

Bay Men’s coach Lance McDonald says his side is getting amped up for the upcoming tournament.
“The boys are really starting to believe in their ability and realise their potential.

“We have a standard from the qualifiers [and] we will only get better. So, given the balance of the squad, it’s exciting times,” he says.

The tournament acts as a “key talent identification tool”, with New Zealand Seven’s selector’s on-hand to identify players for next year’s development teams.

Bay Rugby is excited about the opportunity to involve and recognise charities that play a key role in Tauranga.

The partnership between Bay of Plenty Rugby and TECT will see free tickets to the Sevens for volunteers from all three charities.

“We want to make the Sevens a fun family atmosphere, but we also want to make people aware of the great things these charities do. It’s a good opportunity to acknowledge the work these volunteers do,” says Mike.

Tasman men’s team are defending champions, and they want to join their 15-a-side team to take home the 2019 title.

The other qualifiers in the women’s events are Auckland, Bay of Plenty, Counties Manukau, North Harbour, Hawke’s Bay, Wellington and Taranaki.