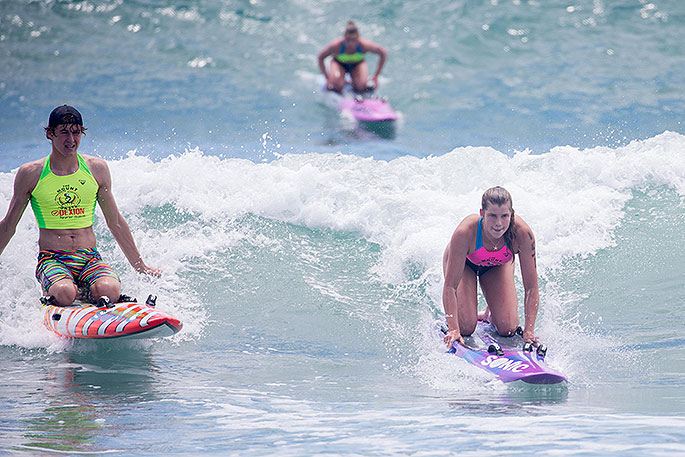 Multiple national ironwoman champion Devon Halligan got her name into the field mere hours before entries closed this week, pitting the 27-year-old Australian-raised Kiwi against a clutch of talented rising teenagers in Saturday's annual epic.

Of that pack, Kelly's credentials are probably most impressive, having been racing - and winning - on the Oceans 38 series in Australia recently, including taking the under-19/open ironwoman double last weekend.

"I was super-stoked with racing in the weekend - I thought I was in with a shot in both irons but it was a nice surprise to take the win for both," says the New Zealand team member. "The endurance format will be interesting for me this weekend - I’m feeling really fit at the moment in the shorter distances but I’m definitely ready to go back to my roots and give some endurance racing a crack."

Kelly also has pedigree in the 24.5km classic, which takes competitors along the stunning Mount Maunganui coastline over four legs.

As a 15-year-old in 2016, she finished fourth behind Danielle McKenzie's record-setting 2hr 25min 46sec effort and minor placings to Kirsty Wannan and Kingi. Injury ruined her next two years, although she was fit enough to help her East End team to victory in the women's open ranks both years.

"I love the general vibe of the Monster - there are lots of athletes from all different backgrounds coming to give the enduro challenge a go and the stunning scenery makes it a really enjoyable race," she said.

In all, there will be 363 surf athletes taking part on Saturday, including a record 97 individuals and 44 in the under-14 Mini Monster.

The main race has had some tweaks in its seventh year, with the opening leg now the 12km ski paddle from Mount Maunganui's Main Beach to Omanu and back.

The 5km run leg to Tay St and back - which previously started the race - will now be the second leg, with the signature 1500m swim, which includes the epic Moturiki blowhole jump, third. Competitors will finish with the lactic-churning 6km board leg.

Among the favourites for the men's race will be Taranaki 17-year-old Joe Collins, who stunned with a second-placing behind Mount Maunganui's Declan Dempster last year. Collins has been living, training and racing on the Gold Coast for the past two months and has also impressed, with a seventh-placing in one of the Oceans 38 open ironman rounds and a win in one of the under-19 races.

He also represented New Zealand at the International Surf Challenge in South Africa this year.

"I've done lots of short course racing but I'm excited to have one more long race this season," says Collins. "I’m super-pumped for the race this year and would really like to take the win."

He tempered that, noting that 2017 winner Hamish Miller (Mount Maunganui) was back taking a break from his burgeoning triathlon career, while Gisborne's seemingly endless production of teenaged talent was liable to throw some surprises up again.

Defending champion Dempster, meanwhile, has made the tough call to skip this weekend's race after recently moving to Australia.

Other innovations this year include organisers partnering up with The Better Packaging Co, who are providing compostable bags for race packs, while EnviroWaste is sponsoring composting, recycling and glass bins to reduce the impact on the environment.

The Monster has also partnered with OneWave - a non-profit surf charity, raising awareness for mental health.

There will also be a minute's silence on race day, paying tribute to the victims and patients of this week's Whakaari/White Island eruption.