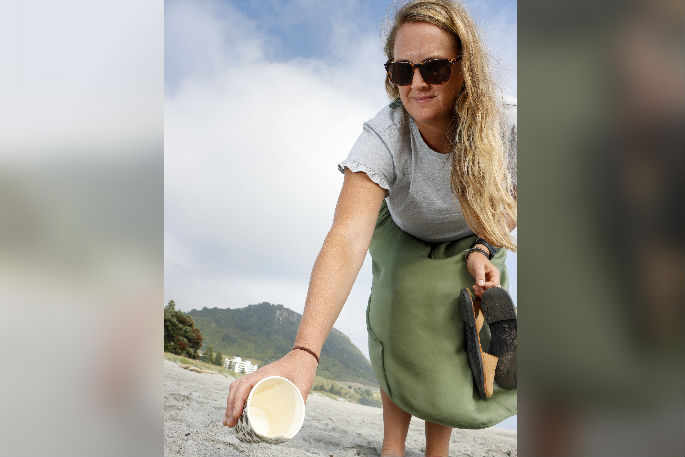 Brenna Roband, organisor of the Main Beach cleanup, didn’t expect to pick up as much trash as they did last weekend. Photo: Bruce Barnard.

Clean, green community members were left in shock after picking up about 100kg of trash in Mount Maunganui.

A group of 70 volunteers spared one Sunday afternoon in November, collecting rubbish from Main Beach, Mount Drury and Moturiki Island for a clean-up organised by Brenna Roband.

Brenna, who has spent the past four years running beach clean-ups in Tauranga, says they picked-up a record amount of rubbish at this event.

“It was our biggest haul in terms of quantity of waste. I knew there would be a lot but I didn’t expect that much – it was pretty eye-opening.”

Brenna was stoked with the turnout of volunteers, but not so thrilled about the huge amount of trash.

“Considering it was the pre-summer rush, it was pretty scary. But at the same time, I’m really glad it is going to be disposed of properly.”

Rubbish collected by volunteers at the weekend's clean-up was audited by Brenna on-site.

According to Brenna, 48 per cent of it will be recycled.

The biggest culprit? “There was a lot of glass – beer bottles and wine bottles – but all of that can be recycled which is good.”

A promising number of eager young people showed up to Sunday’s event, Brenna saying it an awesome opportunity to “educate the young ones about the waste problem.”

Tauranga boy Hugo was among the many youths who got involved in the clean-up.

Afterwards, he was motivated to create a poster raising awareness of the trash issue, which was posted to Brenna’s Facebook page.

“I think that people should pick up the rubbish after there self. One day the ocean is going to be terrible,” the poster read.

“A shout out to Satsuki from Keep Tauranga Beautiful. Thank you for your continual support,” says Brenna.

More beach clean-ups are being organised for next year in Mount Maunganui, Papamoa and other areas of Tauranga.