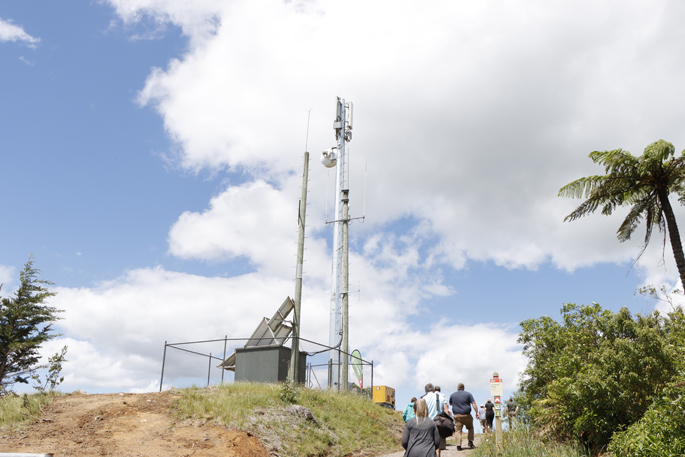 The cell tower at TECT Park is officially turned on. Images: Daniel Hines/SunLive.

Users of TECT Park and motorists who travel through the area along State Highway 36 will now be able to use their cellphones – and call for help if needed – as a new cell phone tower was officially switched on yesterday at the TECT Park site.

As well as having coverage throughout the park, cell phone reception will also be welcomed by the wider community between Oropi and Ngawaro which, until now, have put up with no coverage.

Mayor Garry Webber says the cellphone connectivity is the line of sight.

“So this whole area out to Oropi, out to Ngawaro, to the base of the Kaimai has now got connectivity. That’s why people are able to use their cellphones here, yesterday they weren’t.”

The project for getting cellphone connectivity at the park has been a long one, with proposals first starting back in 2011.

“Good things come to those who are prepared to wait, and we have waited. But equally, it’s a remote spot and there’s a lot of other people in New Zealand that have wanted this sort of technology, and we’ve just had to be patient and waited and good things have come to us.

“I think the critical thing is the cell phone coverage is one thing, but it’s what it brings to the park and the park users, there’s a lot of things that happen in here. 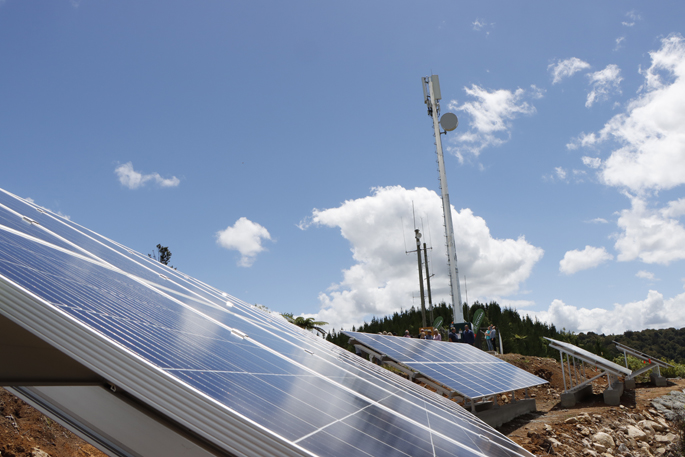 Eighty solar panels, a powerful energy storage unit and back-up generator will help keep the tower up and running.

“Where somebody might fall off a horse or somebody fall off a bike – to be able to get emergency services in here very quickly is absolutely essential.

“So now this park has got all of those facilities that any good world-class facility would expect to have. So we are now what I believe at world-class standards,” says Garry.

Mayor Tenby Powell says other than just the connectivity of TECT Park, it goes to show what can be achieved when the councils work together.

“Tauranga City Council, Western Bay District Council and I do add the Bay of Plenty Regional Council under that as well – if we are, as to Mayor Webber’s speech, in the waka, same waka, paddling in the same direction, imagine what we could do.

“And you will see a lot more of that from particularly Gary and I, but also from Doug Leeder – thinking about things together, working together as much as we can do and sharing the journey together.

“When you look at the activities that are out here from mountain biking to rifle shooting to horse riding, I think this is a really positive move for the whole park.”

Tenby says there is no doubt that by having access to cellphone connectivity it will benefit emergency services.

RCG engagement manager Caitlin Metz says RCG has enjoyed working with the two councils, TECT Park management and Base Power to bring this much-needed facility to the park.

“It’s been a shared goal and successful collaboration. The services provided by Spark, Vodafone and 2degrees will provide safety and convenience for the 300,000 plus visitors to the park. Mobile operators have tried for a decade to bring services to the area and it is the success of the RBI2 and MBSF programmes that have ensured coverage has finally been delivered,” says Caitlin.

Base power is the energy behind the new mobile communications tower, with the tower expected to boost safety at the park.

Boasting 80 solar panels, a powerful energy storage unit and back-up generator, Base Power is providing a continuous supply of energy to ensure people can use their mobile phones in the park at any time of the day or night. It can also grow to accommodate future needs.

Base Power business manager Jayson Vinsen says Base Power’s solar panels, energy unit and generator, as well as the cell tower, is situated on top of a hill in the park, attracting maximum sun while also being protected from southerly winds by a bank.

“All those solar arrays are a pretty impressive sight while also being a renewable energy source, giving the same quality power you would get in town,” he says.

These units are fitted with communications capabilities which allow the Base Power team to remotely monitor the system for RCG.

“The batteries will charge during the light of the day, allowing for constant energy at night. I’ll also be monitoring the levels of diesel in the generator to make sure there’s always enough to keep the power on should there be prolonged spells of low light coming into the solar panels,” says Jayson. 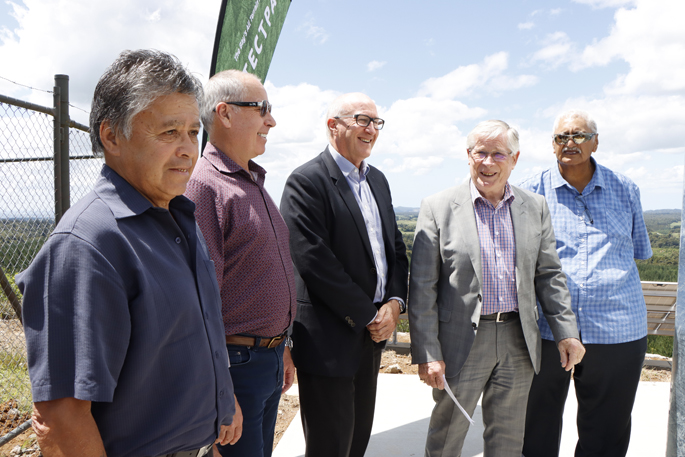