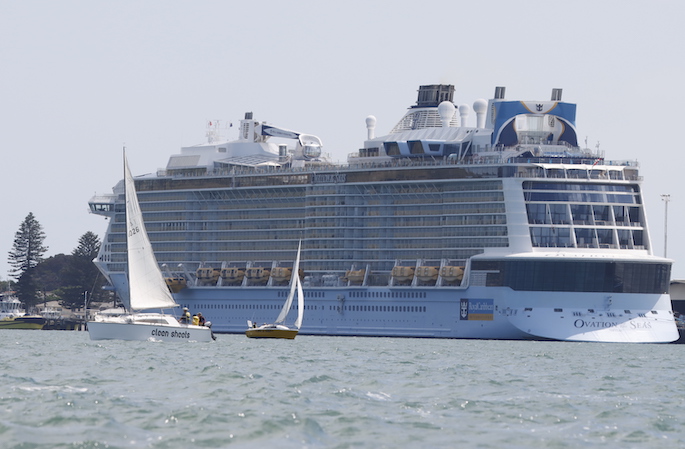 Ovation of the Seas docked in Mount Mauganui.

Passengers on board the Ovation of the Seas described the mood as “eerie” following news of the fatal White Island eruption.

The cruise ship was due to depart from the Port of Tauranga at 6pm on Monday, but has stayed in port as passengers from the ship were on the volcano when it erupted at 2.11pm.

New Zealand Cruise Association CEO Kevin O’Sullivan confirmed that a group of 30 to 38 people from the Ovation of the Seas were on a tour of White Island Monday and had not returned.

Police have confirmed that five people are dead and eight others are still unaccounted for.

Another 37 people are reported to have sustained injuries and were taken to Whakatane and Middlemore hospitals for specialist treatment.

A woman known as Caro posted on Twitter about the “eerie mood” in Mount Maunganui following news of the eruption.

It's an erie mood here in Mt Maunganui tonight. Looked out my window at #OvationoftheSeas sitting in dock. ...quiet & sombre, waiting to see if, in the light of day, it's passengers & crew are returned. We live in hope.#Whiteisland

A Royal Carribean Cruises spokesperson says they are devastated by yesterday’s events.

“We are working together with local authorities, and we are providing all the help and care we can to our guests and their families, including offering medical resources and counselling.

“We are also sending staff members from both our ship and our Sydney and Auckland offices to assist family members however possible.

“Ovation of the Seas will remain in port as long as needed to assist with the situation.”

Family members concerned about the status of relatives traveling aboard Ovation of the Seas may inquire by calling the following numbers: