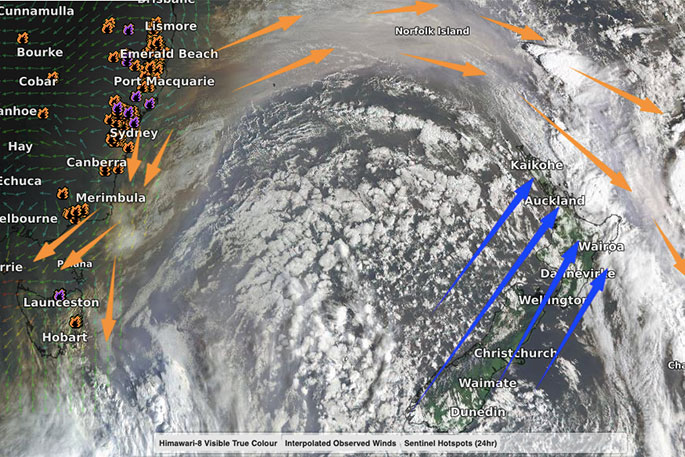 CURRENT VISIBLE SATELLITE MAP (8am NZDT, 6am AEDT) shows plenty of cloud but the smokey/hazy portion is now north of NZ, or hugging eastern Aussie as windflows change following a cold front that moved up NZ on Sunday with a southerly change.

A cold front on Sunday delivered deluges across the North Island, helped clear smokey skies up and ushered the sub-tropical air away bringing a refreshing change.

Sunday's northern downpours, which came from the same system that flooded the West Coast and brought and incredible electrical show to parts of Wellington at the weekend, brought thunder and rain relief to some very dry parts of Waikato and surrounding regions.

"However, as we forecast last week the downpours for northern NZ was "hit and miss". For those who had a big soaking downpour of rain there were just as many - if not more - who missed out almost entirely," says WeatherWatch.co.nz

"The next seven days ahead lean drier than normal in about 85 per cent of the country with Southland and the lower portion of the West Coast most likely to have "normal" rainfall - and maybe coastal Taranaki too.

"Monday is the first day in weeks for some northern areas to have a "normal" temperature day."

Tonight may be cooler than normal for many.

In fact the next few nights may be cool - but you'll also notice a rapid daytime warm up again as sub-tropical or nor'west winds from Australia drift over the South Island pushing daytime highs 8, 9, 10 degrees C above normal again.

"The smoke from Australia also shouldn't be as bad this week in NZ although some airflows may drag it down towards the lower South Island where nor'west flows out of the eastern Aussie region may pop up at times.

"Air pollution levels are "good" right across New Zealand with much clearer skies today compared to just 24 to 48 hours ago."