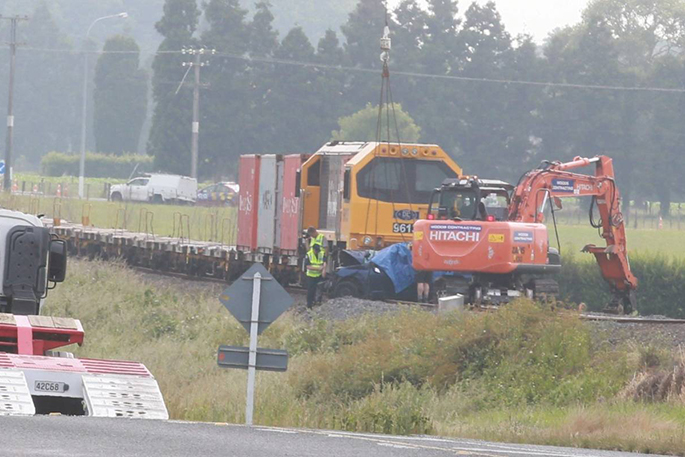 The car was shunted about 500 metres from the rail crossing down the line towards Hamilton. Photo: Mark Taylor

Barrier arms being installed at a notorious railway crossing will arrive too late for two people who were killed when the car they were in was ploughed into by a train, early on Saturday morning.

Road marking work was being carried out at the crossing at the intersection of Piako Rd and State Highway 26, near Morrinsville, where the crash happened about 4.10am.

The impact killed the two people inside the car, believed to be a Toyota Platz.

The train, which was travelling towards Hamilton, shunted the smaller vehicle about 500 metres down the line before it came to a stop, sending ballast and debris flying onto the nearby road.

The car remained stuck fast on the front of the train until it was hoisted away by a crane around 9am.

At the time the collision happened there were roading contractors carrying out road marking work at the intersection, and a stop-go crew were engaged in traffic management there.

It is not yet known how the car came to be crossing the tracks at the moment the train came through.

While there was early morning fog in the area at the time, it is understood there was no fog where the crash happened.

SH26 is closed between Matuku Rd and Avenue Rd while police investigate.

Police are still trying to determine how the crash happened and were not able to provide any update on the situation. 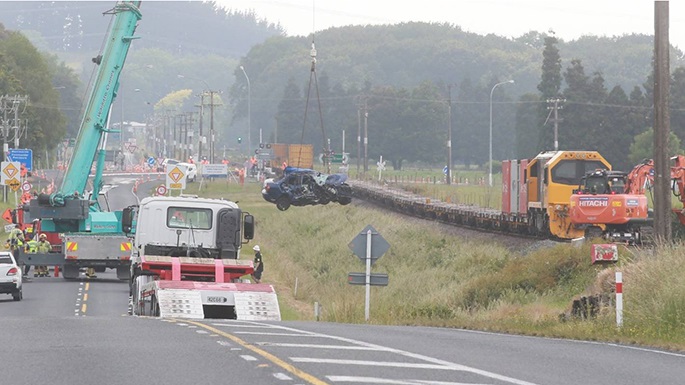 The twisted remains of the vehicle were moved from the scene of the crash about 9am on Saturday morning. Photo: Mark Taylor

The crossing has been the site of numerous crashes in recent years.

In March 2017 John Martin Thorp, 90, was killed when the car he was in collided with a train there.

In March this year a train struck a car there, however in that incident the occupants were uninjured.

Stephen Reading, the co-owner of Colsteve Contracting, the traffic management company carrying out the road marking work, could reveal little about how the crash happened.

"I don't know what was going on at the site at the time," he said.

"I wasn't there, so I can't tell you exactly what happened," he added, before abruptly terminating the call.

KiwiRail chief operations officer Todd Moyle said the crossing was in the process of being upgraded, with barrier arms due to be installed and commissioned in the new year.

Flashing lights and bells were in operation, he said.

"This is a tragic incident and its effects will be far-reaching. Our thoughts are with the friends and family of those who have died, and also with our driver, who we are providing with appropriate support, including counselling."

The train was a freight service travelling from Mt Maunganui to Hamilton when the collision occurred on the East Coast Main Trunk Line.

"We expect the line to reopen this afternoon once we receive clearance from the police."

NZ Transport Agency Waikato/Bay of Plenty media manager Megan Heffield said she was unable to provide any comment on the crash until after the police investigation had been completed.

She was likewise unable to provide crash statistics for the intersection.

Former Matamata-Piako district councillor Paul Cronin – who has long campaigned for safety improvements at the intersection – said he believed the new barrier arms were days away from being installed.

"They were supposed to be installed before the start of November according to the flashing road advisory signs," he said.

"The date kept getting pushed back and pushed back ... How many people have to die before they make it a priority?

"I won't hear a word of the fact they have not got the money, because they have. I'm not sure where the delay is coming from, if it is NZTA or if it is KiwiRail.

"It's another example of the lack of focus on the regions. It's the big cities that get the attention and the regions are just left with the scraps."

Speaking shortly after 1pm, a police media spokeswoman said she was unable to provide any details about the victims of the crash, including ages and genders.

She was likewise unable to say when the road would be re-opened to traffic.

Diversions are in place, and motorists are asked to avoid the area. 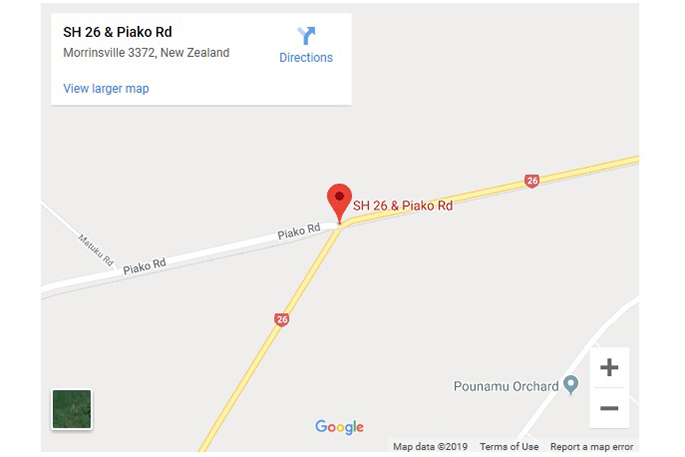