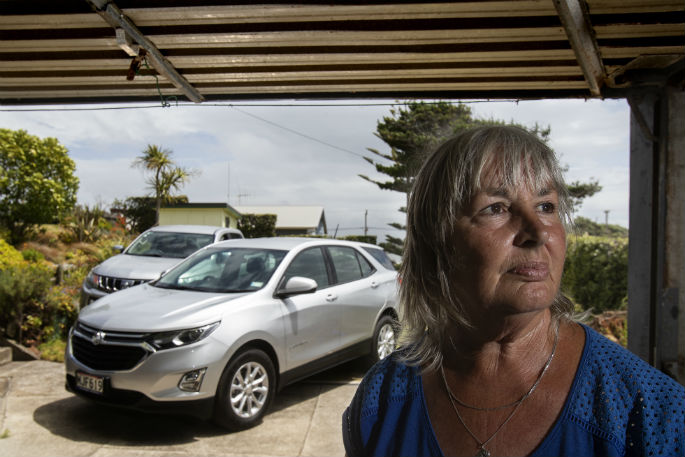 Moira McCallum tells the story of her close call on SH2 last month.

A plaintive appeal for commonsense on the roads this Christmas. An appeal to stay alive.

And it comes from a woman who came scarily close to being another fatality statistic on one of the country’s most notorious and bloodied stretches of state highway – SH2 between Tauranga and Katikati.

In the last 20 years there have been 42 fatal crashes on that road and 106 serious crashes. Moira McCallum and her partner Ken Trugden could easily have been fatal crash number 43.

It was Friday November 8, the day Moira and Ken just about didn’t come home.

“We were driving home to Pukehina from Katikati, following a ute with a canopy down SH2. The ute had its blinkers on and turned left into Morton Road,” explains Moira.  A car, sitting at one of the 43 intersections on that stretch of highway, and waiting to turn onto SH2 towards Katikati, failed to make sure the road was clear behind the ute.  It wasn’t clear.

“I just slammed on the anchors. I saw this car but she didn’t see me. I don’t know why she didn’t see me.” It was split second stuff, accompanied by an instant sense of doom. “I just screamed: ‘shit, I am sorry’.” Moira thought she was about to die. The cry was a spontaneous farewell to her partner.

The car t-boned Moira’s Toyota Aurion – took the front left out. “I had never seen the front of a car disintegrate like that, bits flying everywhere, for miles.” Then the airbags deployed. “I don’t want to live through that again. It was like a million rubber bands hitting you in the face - ping, ping, ping.”

The impact propelled Moira and Ken’s car into the oncoming lane. There was no oncoming traffic.

“Ken saw his life flash before him. And I have never been so terrified in all my life.”

The gods were certainly with Moira and Ken at 2pm on Friday, November 8. They had cheated the notorious SH2. Now the Pukehina couple want others to give themselves the best chance of surviving SH2.

“So get the message out to people,” Moira tells The Weekend Sun. “Please, please, please. With the silly season coming up, drive to the conditions and be aware of what's happening around you. Focus 100 per cent on your driving. It’s not a race, travel at a safe speed and at a safe distance. Give yourself a chance.”

And the other thing that incenses Moira are drivers and cellphones. “I've been known to wind down and almost climb out the window to verbally abuse people using their cell phones and driving. You can't use a cellphone and drive.” But they do. The penalties, suggests Moira, aren’t enough to deter.

And another thing. “I'm gob-smacked people want to drive right on the centre white line. I think I am a reasonably careful and safe driver and always travel well to the left hand side of the lane because it gives you a bigger margin of error.”

Weeks later and Moira says she still feels jittery out on the road. It only takes something small to set her off. “Like me waiting at a ‘Give Way’ for an approaching driver with his blinkers on to turn left.” She waited for him to complete the manoeuvre, she didn’t want to try her luck. The driver went sailing right across her bows. Another close call. “People aren’t paying attention, people are being careless.”

Then her smoke alarm went off at 5:30 one morning.

“That too - another ten years off my life.”

If there was one positive from Moira and Ken’s experience it was the people. “The emergency services and passersby. We’re so lucky in this country to have all these good people doing what they're doing with kindness, care and consideration.”

But it just takes a moment of distraction, a misjudgment, impatience or speed to turn a holiday drive into a funeral cortege. Moira McCallum and Ken Trudgen will especially enjoy this Christmas.

It was one of the blackest years on record last year on Western Bay of Plenty roads last year.

Eighteen people lost their lives in 17 crashes. The previous year, 14 died. In 2016, 19 died, including five Tongan packhouse workers killed in a single crash on State Highway 2.

Did you read the article (By Honesty is the best Policy). Think you’ve missed the crux of the article. Cheers Just T.