Wind and rain for some, fine and warm for others 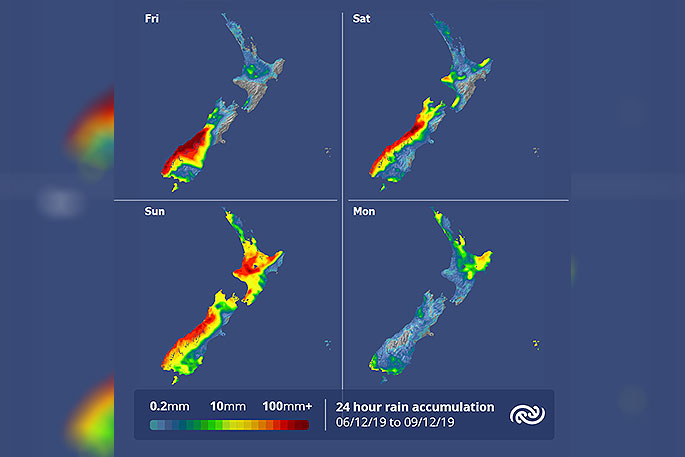 MetService is forecasting more rain and gales for central and southern parts of New Zealand through to the end of the weekend, while eastern regions will be fine and warm.

MetService continue to have Severe Weather Warnings and Watches in place, as this week has seen very wet weather in the west of the South Island, while northwest gales have lashed central and southern parts of the country.

The severe weather continues through the week and into the weekend for many parts of the country as a strong, moist northwesterly flow maintains its hold over the country’s weather.

Rain on the West Coast has been very heavy, even by West Coast standards.

“More than 600mm of rain has accumulated at several weather stations in the Alps since Monday, which has then flowed from alpine headwaters into rivers and lakes," says Meteorologist Tahlia Crabtree.

"The persistent rain means lakes and rivers haven’t had the chance to subside. Warnings are out for heavy rain, which is expected to continue until Sunday.”

Summer hasn’t been lost on everyone, as northwesterlies bring fine and warm weather for those along the east coasts of the country.

Napier has already reached a maximum temperature of 29°C this week and is forecast to push into the 30s moving into the weekend.

Some respite is on the way from the northwesterly rain and wind, as a front moves up the country on Sunday and Monday, bringing an end to the wild weather.

Monday is set to welcome in a period of settled weather, with mild temperatures and lighter south to southwest winds.