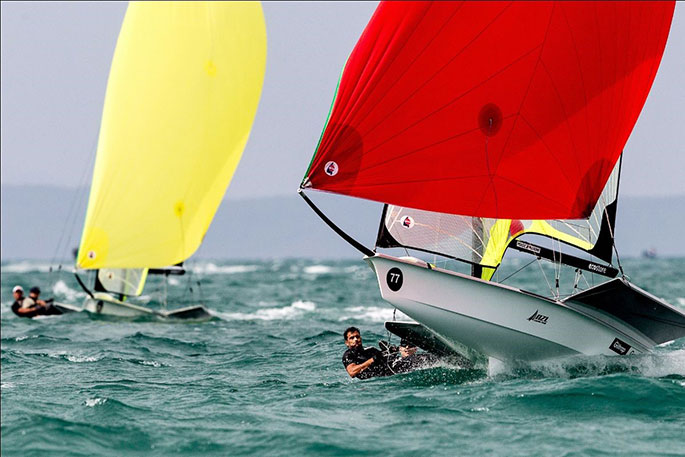 Peter Burling and Blair Tuke are second in the 49er at the Hyundai 49er, 49erFX and Nacra 17 world championships. Photo: Sailing Energy.

The scorecard doesn't always tell the full story but it shows Peter Burling and Blair Tuke in a strong position after the second day of the Hyundai 49er, 49erFX and Nacra 17 World Championships in Auckland.

The pair banked two thirds, a first and an eighth in their four races to jump up from 11th to second in the 49er class, only one point behind Benjamin Bildstein and David Hussl of Austria.

But the four-time world champions and defending Olympic champions had to claw their way back into a couple of races in sometimes treacherously shifty conditions.

The breeze built around the middle of the day, climbing to about 15 knots, but died off completely in the late afternoon as the last 49er race was concluding. Some boats were almost pushed back over the finish as they limped to the line.

"It was definitely a really tricky day out there," Burling admitted. "We had a fair share of either going backwards or forwards in races at times but we are pretty happy to walk away with the scorecard we did. It could always have been a bit better but it could also have been worse. All in all with how tricky it was, we were pretty happy."

Logan Dunning Beck and Oscar Gunn were also pretty satisfied after winning two of their races which helped them climb from 33rd to seventh overall.

With one more day of qualifying before the top third move into gold fleet, the priority is to post consistently good scores, especially as there are a gaggle of teams within striking distance of the leaders.

"We survived the day," Gunn said. "It's just about not throwing it away, really. A lot of people screwed it up today and yesterday so there are a few good guys who aren't in contention any more.

"We tried really hard to throw it away but we haven't yet so we will keep on chipping away and get some more good scores on the board."

Alex Maloney and Molly Meech did mostly that in their first day of racing at these world championships and sit in fourth in the 49erFX fleet after four races. They posted two top-three results across their four races and had two other middling scores on a day when some of the favourites struggled.

"I thought we did a lot of things well but we also made some mistakes that are easy to see in hindsight," Maloney said. "On reflection, it seems like it was one of those days that was high scoring so it was about minismising mistakes."

The top four teams in the Nacra 17 did a really good job of that in their four races and only one point separates the quartet. Great Britain's John Gimson and Anna Burnet hold a slim lead over compatriots Ben Saxton and Nicola Boniface with Riley Gibbs and Anna Weis of the United States third.

Gemma Jones and Josh Porebski were the best of the Kiwis in 16th. Micah Wilkinson and Erica Dawson are 17th and Liv Mackay and Jason Saunders 20th on a congested leaderboard that shows only 21 points between the top 20 teams.

There's still a long way to go in these world championships, which finish on Sunday, and it will be something of a war of attrition.

The 49ers, in particular, have already had two long days, but Burling and Tuke were relishing the battle ahead.

"It's what you train for, isn't it?" Burling said.

And those two know better than any what it takes to win.

Results and standings after day 2 of the Hyundai 49er, 49erFX and Nacra 17 world championships at the Royal Akarana Yacht Club: