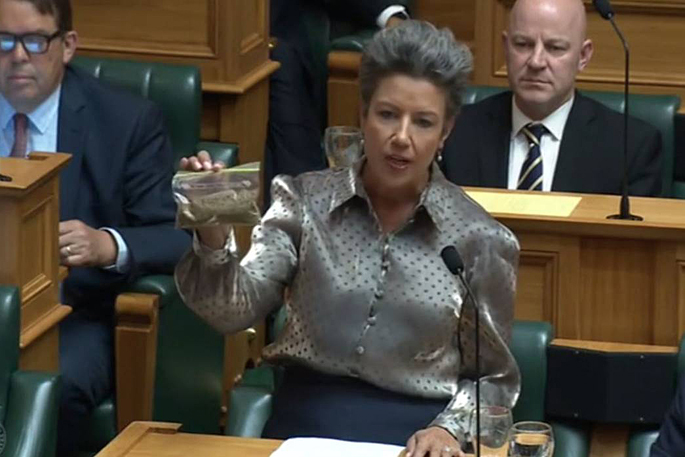 National Party deputy leader Paula Bennett has taken issue with a Government proposal to legalise 14 grams of cannabis. She held up a bag of oregano weighing as much in the House. Image: Parliament TV.

Cannabis law that could see New Zealanders legally buy 14 grams of the drug has MPs in a spin.

National deputy leader Paula Bennett was told to "chill out" today, when she held up a bag containing what she claimed to be 14 grams of plant matter — later confirmed to be oregano.

She asked the Prime Minister whether being able to buy 14 grams a day "promoted the wellbeing of New Zealanders".

The law, revealed yesterday, would legalise the personal consumption and commercial sale of cannabis.

The Government says it had drafted a tightly controlled regime that focuses on harm reduction, and are asking the public to vote on whether legalised cannabis is wanted at the 2020 election.

Prime Minister Jacinda Ardern says she had inquired about how much cannabis 14 grams was, and was told it was anywhere upwards of 14 joints.

"It is based on New Zealand survey work that's been done around drug harm ... but also looking at international evidence. It's a lower base then most other jurisdictions that have gone down the track of legislation have used."

She says both Washington and Colorado, in the United States, set personal possession quantities higher than 14 grams.

If MPs felt the threshold was too high, they should make their concern clear, she says. 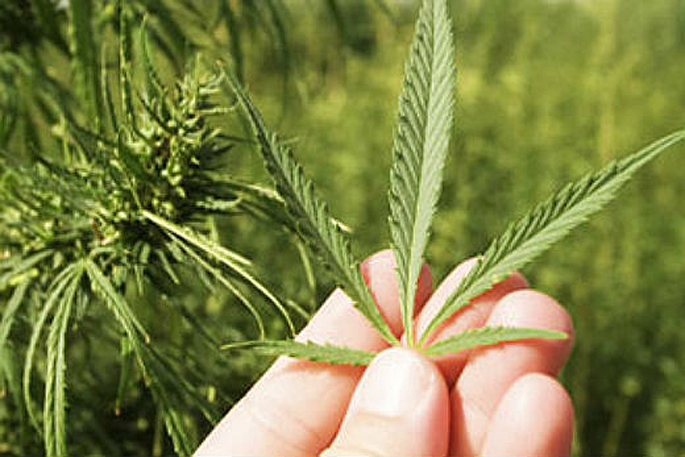 In the House, Speaker Trevor Mallard asked both Bennett, and a loudly arguing Finance Minister Grant Robertson, to "chill out".

Justice Minister Andrew Little, responsible for the bill, says such discussion of people consuming 14 grams in a day was "fantastical".

"It's a bit like saying, 'somebody who goes off to buy a bottle of vodka at 7 o'clock on a Friday night, is going to consume it there and then.

"Find me somebody who has smoked 42 joints in a day and I'll take the objection seriously," he says.

The Government had set the 14 gram threshold on advice it was enough for a regular cannabis consumer over the course of a week.

Bennett, concerned the 14 gram threshold is too high, wants to see it lowered.

National Party leader Simon Bridges says there were still unanswered questions like the level of THC, the active ingredient in cannabis, that would be permitted.

"I would've thought half an ounce [roughly 14 grams] is far too much. I think that's something that gets one person, but quite a number of people high.

"I'm no expert on these things," he says.

The people have the chance to decide in the referendum.Be interesting to see what the polls say for and against.

....it so does. It’s offhand comments as such that make me concerned about how ’grown up’ we are as a country. We DO need a government to make rules and laws in many cases protect us from eachother, otherwise we have anarchy....and whichever side you are on, good and bad stuff can happen when you have no control over use or supply. If it is needed for medical reasons, then so be it as prescribed by a medical professional under supervision. The more now I think about posts such as this the more I know my NO vote it needed....for now.

idiot to tell me what I can and cannot use from the plant kingdom for my own benefit, non of their bloody business.

Really!!? 14 grams hardly worth the bother

Dealers deal in kilograms, make a pound legal , that is half the dealer’s act and more than most ( stoners, wasters and ounce sellers) can afford now. That will lower the price and desirability of kilos, and make it uneconomical for illegal dealers to bother. The stoners etc will still not be able to afford it, the cops won’t be bothered , it will stop clogging up the court system, the cops won’t be able to junket all over the country in helicopters, for NO GOOD REASON. Less fines and lower prices will lower pressure on WINZ for extra benefits . Ten things cured at once. Stoners will chill, polis will get on with important stuff and workers will carry on supporting all of the bludgers. Some of the Polis that used to be stoners (or still are ) might even chillANDadmitit...

other countries went down the track, not up the track.