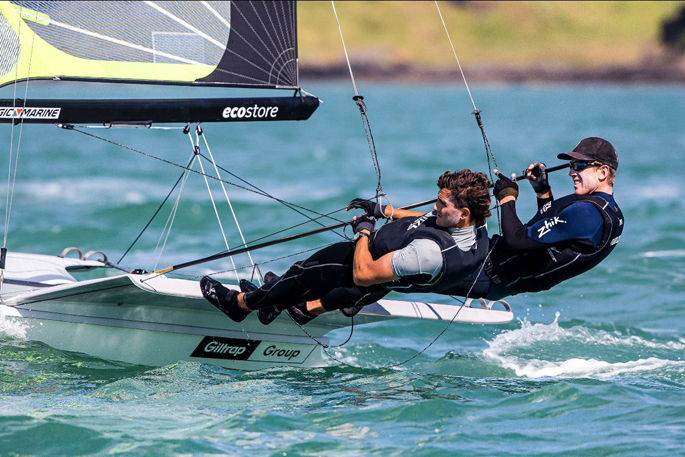 Peter Burling and Blair Tuke were about 400m away from the perfect start to the Hyundai 49er, 49erFX and Nacra 17 world championships today but a capsize close to the finish line left them thinking about what might have been.

The four-time world and defending Olympic champions easily won their opening race, finishing about two minutes ahead of their nearest rivals. They were on course to finish second at worst in the second race but a big crash in gusty conditions left them scrambling to minimise the damage.

They eventually crossed the line in 11th, which left them 11th overall after the first day of the regatta being sailed out of the Royal Akarana Yacht Club.

"It was a big pitchpole mid-gybe, which is not ideal," Tuke explained. "It was pretty gutting. There were quite gnarly waves down by Browns Island and good puff. We are good enough to gybe in that stuff, it was just execution.

"It's pretty frustrating because we were going so nicely, but it's still alright and there's still a long way to go in qualifying so we will bounce back."

They were not the only combination to post a bigger number than they might have hoped as teams struggled with the gusty conditions late in the afternoon.

It looked earlier in the day like there might not be any racing at all as a powerful storm rolled across Auckland bringing heavy rain and gusts in excess of 50 knots. It meant racing was cancelled for both the 49erFX and Nacra 17 fleets who had been due to race in the afternoon session and the 49ers weren't sent out until the breeze had died sufficiently.

Germany's Erik Heil and Thomas Ploessel top the standings ahead of France's Kévin Fischer and Jauvin Yann, with Bart Lambriex and Pim van Vugt of the Netherlands in third. But only 13 points separate the top 20 crews.

Isaac McHardie and William McKenzie are the next best of the Kiwis in 19th but they, too, had their issues, forced to do a penalty turn in their opening race after a port-starboard incident.

Logan Dunning Beck and Oscar Gunn had a disappointing opening, finishing 21st in their first race, but recovered well to be third in their second which left them in 33rd overall.

They are by no means out of the picture, especially with the drop for the worst result still to come into play, but it means they can't afford too many more mistakes.

"We were probably our own worst enemy at times," Dunning Beck says. "We straight up choked in the first one and couldn't perform. We were pushing wet noodles around and not really going anywhere.

"We got on top of things in the second one and were a bit more comfortable in the breeze and just got on with it. We looked at the shifts and forgot about everything else and tried to get back into it.

"It would have been the end of the regatta if we had two bad ones in there, so it was necessary for us to bounce back. We're not happy with that but we are not out of it. One day down, five to go, and we had better carry on like we finished that last one."

The forecast is for much more benign conditions tomorrow and race management will look to catch up with the racing schedule when the 49erFX and Nacra 17 crews hit the water for the morning session.

Results and standings after day 1 of the Hyundai 49er, 49erFX and Nacra 17 world championships at the Royal Akarana Yacht Club: