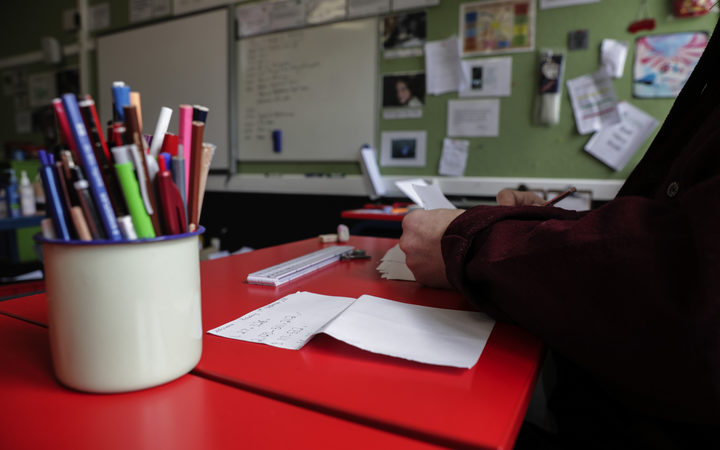 The Education Ministry says the drop in scores since 2015 is not statistically significant. Photo: RNZ / Richard Tindiller

The country's average scores in all three subject areas fell slightly, continuing a slide that has been going on for more than a decade in the OECD's prestigious Programme for International Student Assessment.

The tests and survey conducted in 2018 also indicated New Zealand students' well-being had worsened, with one-in-five reporting they did not feel safe at school, more students saying they felt lonely, and more complaining of disorder in their classrooms.

The Education Ministry says the drop in scores since 2015 was not statistically significant, but it was worried by the long-term trend.

In the past 12-18 years, New Zealand's scores had declined by 23 points for reading, 22 points for science and 29 points for maths. The OECD estimated that 30 points were equivalent to one-year of learning.

Despite the ongoing decline, New Zealand's average scores were all above OECD averages and sufficient to place New Zealand among the better-performing nations in reading and science.

For reading it was ranked 11th equal with Sweden out of 79 participating countries and regions. The score was about the same as those of the US and UK but well behind China which scored an average of 555 for children in four participating provinces, and Singapore which scored 549.

In science, New Zealand's score was the 12th highest, just ahead of Slovenia and the United Kingdom and the Netherlands. China led the table with a score of 590, followed by Singapore on 551.

In maths, New Zealand's average score was 27th, between those of Iceland and Portugal and behind league table leaders China (591) and Singapore (569).

The OECD says 600,000 students in 79 countries and regions sat the two-hour PISA test last year, including 6200 New Zealanders from 194 schools.

The major focus of the 2018 PISA tests was reading and the New Zealand results showed a gender gap of 29 points in favour of girls, down from 46 points in 2009.

The report says the performance gap between New Zealand's rich and poor students had narrowed from 104 points in 2009 to 96 points last year, slightly higher than the OECD average of 89 points, and few students from poor backgrounds performed at the highest levels.

The Education Ministry's deputy secretary, evidence, data and knowledge, Craig Jones, says the main reason the gap between rich and poor had narrowed was that average scores for children from well-off backgrounds had declined more than the scores of children from poor backgrounds.

He says a range of factors was likely to have caused the long-term fall in New Zealand's scores, including falling enjoyment of reading among 15-year-olds.

"It's very strongly related to reading achievement and more kids are saying that they're just not reading for enjoyment anymore," he says.

Craig says more students also reported that their classrooms were not good for learning.

"One of the other things that we're seeing in PISA this year is a lot more kids are saying that there are challenging learning environments so they say there is noise and disorder in the classroom or kids are not listening to what teachers are saying and that disciplinary climate is really important to effective learning outcomes."

Craig says the tests found that students' sense of belonging had fallen in most participating nations including New Zealand. Fewer students agreed that other students liked them and that they felt like they belonged at school, and more said they felt lonely and awkward at school.

In addition, New Zealand had one of the worst scores for classroom behaviour of any OECD nation with more students reporting noise and disorder in their classroom (41 per cent) and more saying students did not listen to their teachers (35 per cent). The number of students who skipped school in the two weeks before the test also increased, to 29 per cent.

The number of students who did not feel safe at school had increased from 13 per cent in 2009 to 19 per cent in 2018 and New Zealand had one of the highest rates of frequent bullying.

He says New Zealand should look at those countries with improving scores, such as the UK.

Craig says the results were the culmination of ten years of schooling and it would be simplistic to blame the decline on the NCEA qualification.

"We need to be looking at what's happening all the way through schooling to understand what's driving the results that we're seeing among our 15-year-olds," he says.

..with all the modern tequnique’s involved along with liberal teaching approaches it rather looks like we are underachieving doesn’t it. Even with the ’expert’ commentators from within the PISA organisation agreeing, according to the very last sentence of the article:..."We need to be looking at what’s happening all the way through schooling to understand what’s driving the results that we’re seeing among our 15-year-olds," ....for ’job security’ reasons, no-one actually does do they?, so results like this will keep going down..and down....and....well....down.....

if they were to spend more time in the classroom learning basic reading and maths skills instead of another non useful language and climate change they would be far better off. also less time on those electronic devices that teaches them nothing

Thats because NCEA is awful!

NCEA works for kids who take subject selection seriously and want to do the hard yards....... probably 20% of kids. It is demoralising though to acheive an excellence in the difficult subjects, then watch other kids take ’soft’ subjects and acheive the same result for 10% of the work.

A generation of kids who are used to instant gratification with minimum effort on their part. Why read a book when you can watch TV...? Reading skills are still critical and will be for some time yet. Kids are still being bullied at school and classrooms have no discipline? There’s no excuse for it. Parents, teachers, and the kids themselves should all be addressing this. It is solvable. The only consolation in this article is that we are not yet hopeless (but we are trending that way...) When are ALL the concerned parties going to take responsibility for conditions in our schools and make school a place where kids and teachers WANT to be? It is not enough to just throw money at it; there has to be a will and motivation to want it to be better.

Not one mention of cellphone use or social media addiction?