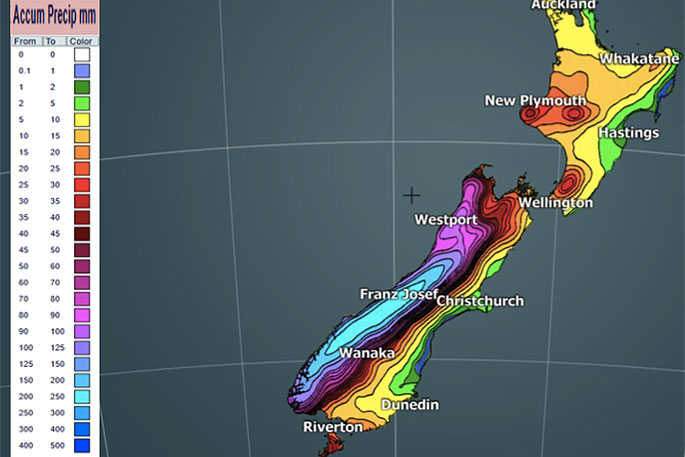 Rainfall accumulation for the next 72 hours around New Zealand. Image: WeatherWatch.co.nz

Tauranga and Rotorua are expected to see the least amount of rough weather as a Southern Ocean storm moves across New Zealand.

Up to 250mm has fallen in some parts of the Southern Alps in just the past 24 hours and over the next few days, another 250mm is coming.

"Today is likely to be the windiest day nationwide but the winds are warm, pushing much of the country above normal temperature-wise today and the whole country will again be above normal tonight," says WeatherWatch.co.nz

:Rough seas are developing in the southern and eastern Tasman Sea across Tuesday, Wednesday and Thursday with some big wave heights."

"Remember, this very large Southern Ocean storm won't be crossing NZ directly, we're merely being swiped by a part of it - which is why the further north you go the calmer and drier it is and the further east you go the warmer and sunnier it is.

"Main centres in the north like Auckland, Hamilton, Whangarei, Tauranga, Rotorua, Taupo and Gisborne are all likely to have the least amount of rough weather with perhaps Tuesday PM being the wettest for this group and windiest.

"For those more caught up in it all, the winds will be more off and on after today but should continue from the west to north west for many regions for the rest of the week. This set up keeps the West Coast very wet and most of NZ mild and eastern areas dry but a bit windy."