Acts announced for Kawerau Christmas in the Park 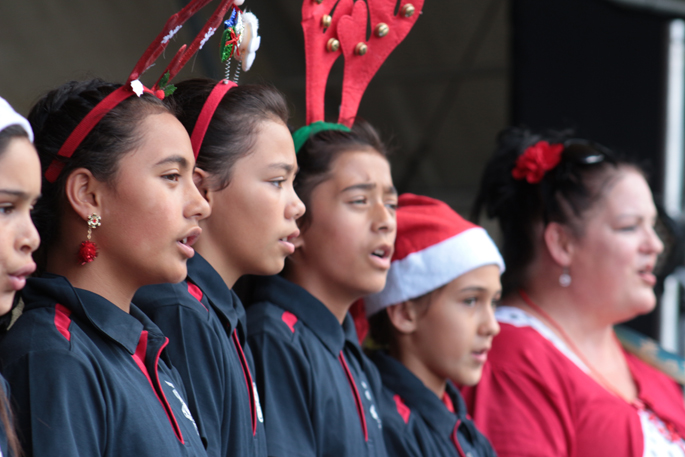 Organisers of this year’s Kawerau Christmas in the Park has announced the performers set to take the stage on Saturday, December 14.

The professional evening show artistic director Chris Powley has come up with another stellar line-up, aimed to suit all age groups:

The Kawerau musical director and maestro Ben Gilgan. Ben is rated as one of the best in the business and has recorded and performed with a string of big names.

Supported by The Kawerau Christmas Showband, containing seven of New Zealand’s most accomplished musicians that have provided musical accompaniment to major international celebrities, world-famous musicals and popular New Zealand television series, such as Dancing with the Stars.

The Master of Ceremony will be MC Tamati Coffey. The award-winning presenter turned politician has become a crowd favourite over recent years in Kawerau, where he has warmed the Kawerau hearts with his surprise cameo appearances. This year Tamati will put his presenter’s hat back on and become the MC for the night.

Queen Frontman, Freddy Mercury aka Steve Larkins is Mercury Rising is widely regarded as New Zealand’s number one tribute artist to the one and only Freddy. Starting out as a professional musician, it was not until 2000 after performing a rendition of the classic anthem ‘We Will Rock You’, his fellow performers present all said the same thing, ‘You have to do something with that’.

Another first-time appearance in Kawerau is the legendary Ray Woolf, QSM, NZOM. With a career spanning decades that has seen him recognised with a Queens Service Medal and the New Zealand Order of Merit, Ray is one of the most accomplished television, film and musical artists in the business.

Returning after an eight-year absence to Kawerau, and described as the iconoclastic, edgy and unapologetic Maori songstress, Ria Hall is a live performer, hot in demand and delivers a live show which has been seen by tens of thousands across Australasia. Her live set best described as an experience that displays her enormous vocal range and ability to effortlessly transition between styles.

The award-winning internationally critically acclaimed Morden Maori Quartet are a suave contemporary Maori showband in the vein of forebears such as the Hi-Marks, Maori Volcanics Showband, Maori Hi-Five, Quin Tikis and The Howard Morrison Quartet. MMQ brings the concept of a Maori Ratpack into the present with a contemporary twist, weaving their acting and musical abilities together to tell stories, fusing hearty and humorous Maori storytelling with the Western tradition of showband entertainment.

The organisers have one final headline act still to announce.

Chris will make an announcement live with Colin Magee on the Radio 1XX breakfast show. Listeners can tune in on the morning of Friday, December 6 to hear what can be expected to be a top headline act.

Kawerau District Council events and venues manager Lee Barton says it is great to secure such high-profile acts again for this year’s show.

“Kawerau Christmas in the Park attracts people from all over the Eastern Bay, as well as from outside the Bay of Plenty, and it offers something for everyone.

“We’re delighted to have Chris involved for a fifth year and look forward to what promises to be a fantastic event for all the family.

“This is an amazing line-up that we hope will entertain all interests and age groups.”

The Radio 1XX Community Christmas Concert hosted by the dynamic duo – MC’s Colin Magee and Arona Kerei who will have heaps of spot prizes with New World Kawerau gift hampers up for grabs with the audience.

The afternoon show, directed by Pari Maxwell with community volunteers have a line-up to display the best of the local talent:

“Whanau, you do not want to miss this one, please come and tautoko our tamariki as they share our beautiful culture through waiata,” says Pari.

The best of the Bay of Plenty youth dance groups will perform, with Whakatane based Steps Dance and Urban Dance from Tauranga on the Kawerau stage.

More up and coming local talent with Nikau Chater, Faith Pryor, and Sherraijka Bruintjes, plus a range of local seasoned bands.

The afternoon show welcomes back Shelley Akuhata with Tumanako Farrell, as I’ll Take Two will headline with their R&B classics blended with a piece of Christmas cheer.

Organisers are working alongside the New Zealand Fire and Emergency and Van Tiel Pyrotechnics to deliver a spectacular firework display, which, if confirmed will add to the incredible show line-up. A final decision is due show week.

Additionally, a 20sq metre screen on site will ensure all spectators can fully enjoy the range of acts.

Kawerau Christmas in the Park is the Eastern Bay of Plenty’s showcase festive entertainment event and organisers encourage locals and visitors to come along. The event is family-friendly – drugs, alcohol and gang regalia not permitted. Bag searches may take place at the venue entrances.

Prideaux Park is a smoke-free venue.