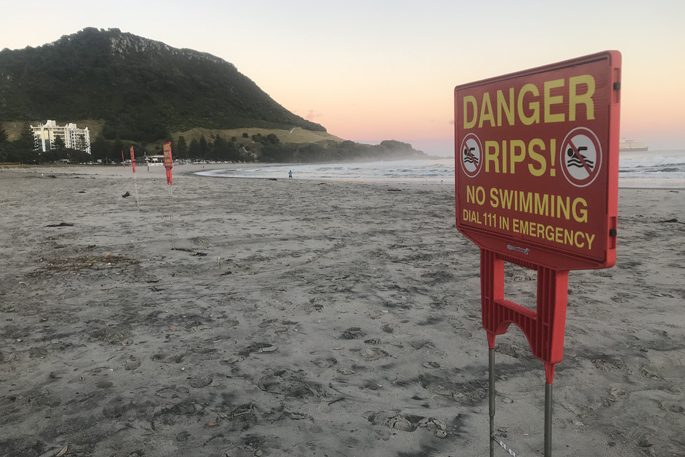 Surf Life Saving New Zealand is urging beach-goers to heed their safety advice this summer, otherwise it could be a tragic Christmas for their families.

The charity’s safety call comes after two rescues were carried out by off duty volunteer Surf Lifeguards on Friday, November 29, and saw four people rescued.

Chief executive Paul Dalton says the rescues mean there are 4 people who will be home with their families for Christmas.

Alarmingly, he says, there have already been 25 drownings between January 1 and October 31, compared to 23 in the whole of last year.

The first incident happened on Otaki Beach when off duty volunteer surf lifeguard Peter Housiaux was out walking his dog.

“I noticed there were 3 girls that were drifting in a rip. They managed to get themselves out. But 10 minutes after that the rip got quite strong and it pulled 3 boys across.”

Peter spoke to a dad of one of the boys on the beach who was trying to wave them in. He asked the dad if the boys were in trouble and they were.

Peter gave the man the keys to the club so he could go in and set the alarm off alerting other volunteer Surf Lifeguards, while Peter got in the water and headed for the boys.

One of the trio got back to shore by himself, but the other two, who had a boogie board with them, needed help. The younger of the two was very exhausted.

Peter got them on the board and they helped each other to get back in.

“The rip came up really fast, they would have been lucky to get in without some help,” Peter says.

“They were glad to see me that’s for sure, their parents were pretty thankful.”

Just a few hours later there was another “right time, right place” rescue at Himitangi Beach.

It was just before 8pm and off duty volunteer surf lifeguard Hugh Dickson was heading to the beach for a boogie board.

“I saw a big group of people on the beach but didn’t think much of it. But then I saw two people out the back, and knew they weren’t meant to be there.”

Hugh paddled out to them, but lost sight of them for quite a while because they were drifting quickly.

“I thought I was a bit late. I kept looking and found them – I was quite relieved.”

When Hugh spotted them again they were still 100 metres away from him.

The good news is the woman and the boy “were doing the right thing” because they were calm and lying on their back.

Hugh gave them a rest on his boogie board and then put the boy on the board and Hugh and the woman kicked their way back to shore.

Police were alerted to the emergency at 7.55pm and the Capital Coast Call Out Squad was notified but they were coming from Palmerston North and at least 30 minutes away.

Hugh believes the pair were in trouble for about 20 minutes before he got to them and feels they wouldn’t have lasted another 30 minutes until the call out squad arrived.

“I was in the right place at the right time. They would have gotten exhausted pretty soon.

“It was lucky the woman stayed calm.”

Surf Life Saving New Zealand regional manager - Central Region Charlie Cordwell says the rescues are a reminder to all beach goers of the importance of the three Rs safety message.

“If you get caught in a rip, remember to Relax and float, Raise your hand to signal help and Ride the rip until it stops so you can swim safely back to shore.”

Charlie says people should also choose a lifeguarded beach and swim between the flags. Lifeguarded beaches have the safest spots to swim mapped out with red and yellow flags.

He says people who do swim at a beach that isn’t patrolled need to be “incredibly careful” and they should never swim or surf alone.

If anyone does spot an emergency, call 111 and ask for police – they have a direct line to Surf Life Saving NZ.