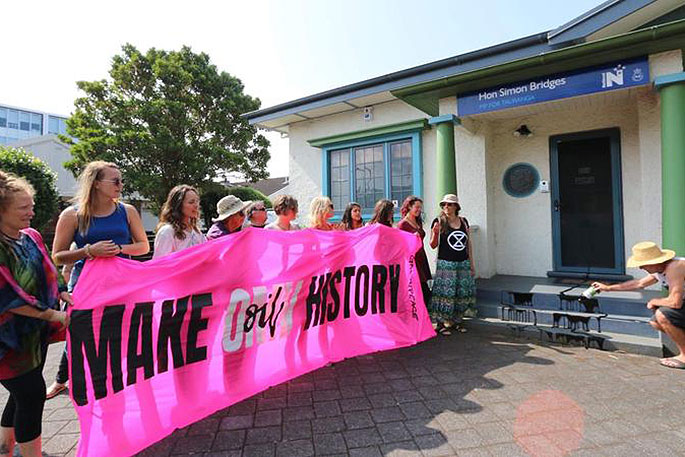 Organic molasses meant to resemble oil, was drizzled down the steps of his office by Extinction Rebellion

In a tweet, Simon says he respects the global environment protest group's right to protest, but not when it comes to defacing people's property.

I respect your right to protest Extinction Rebellion but not when it comes to defacing people’s property as you’ve done to my electorate office overnight. pic.twitter.com/1C7R9tkHz6

A member of Extinction Rebellion Aotearoa has posted on Facebook that Simon told the group in October that rather than target the Ministry for Business, Innovation and Employment over the Austrian-based oil company OMV, it should target the government instead.

Doug Doig says in response, the group brought their protest right to his doorstep. In a post on Facebook, he said it was time to get vocal on what "dirty oil" was doing to New Zealand.

"This is a climate and ecological emergency - we need people like National Party leader Simon Bridges to tell the truth about the state of things. We need to move out of fossil fuels and into a new, justice- based vision of Aotearoa."

While I respect people’s right to protest, aside from the photo op and annoying our local MP, when it comes to logic or planning this group scores zero. Firstly, when protesting government policy it pays to remember who actually is in government. Not to mention that protesting outside a closed office doesn’t actually get you heard even if your target isn’t actually the one calling the shots, neither does protesting down a side street on the same day as a major community event raise much public awareness. All in all a poorly planned event that was only noticed because Sun Live was to multi tasking.

There is a dilemma here: the group want to do something that will attract attention and services like Sun Live are bound to report the news. So the Vandalism was "successful" from the group’s point of view. But it seems a shame that a worthwhile cause has to descend to this. The end does not justify the means and it never can in an ethical society. Maybe they could make amends by cleaning up after the news photo opportunity has passed, or they could undertake a more positive community action and get even more publicity... Many of us support Greenpeace, but that doesn’t mean we are happy when they undertake illegal actions. The same applies here.

That muck on the stairs of the Simons Nat electorate office is only minimal in comparison to the muck raking this MP and his party engages in.

Deluded, hypocritical, ludicrous. Do they live in caves? Grow and make everything themselves, transport nothing , go nowhere, no I think not! Like it or not civilization as we know it currently relies on oil and its products this includes them. Protest if you must but legally not disrupting people going about being employed nor attacking property. You should be in court facing charges and a stiff fine

Those 14 odd protesters need another hobby

Bet they all drove there in their fossil-fuel powered vehicles