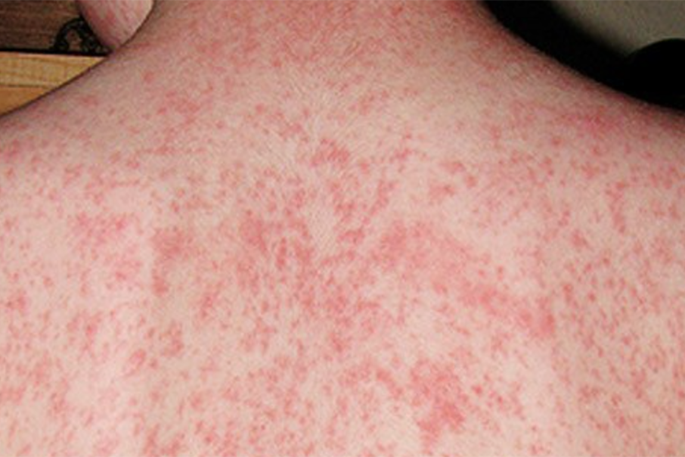 A measles rash on a patient.

UK medics are joining the fight against a fatal outbreak of measles affecting thousands of people in Samoa.

The group of 13 British doctors and nurses left the UK for the Pacific island today, to help children who are suffering.

The support from the UK-aid funded UK’s Emergency Medical Team (UK EMT) follows an urgent request for British expertise from the Samoan government and the Australian Medical Assistance Team (AusMAT), who have spent the last two weeks tackling the outbreak.

Over 3000 people in Samoa have so far been infected, and 42 people, including 38 children under four have died. A further 250 new cases were recorded in the last 24 hours.

Latest update: 3,149 measles cases have been reported since the outbreak with 213 recorded in the last 24 hours. To date, 42 measles related deaths have been recorded. Since the Mass Vaccination Campaign on 20 Nov 2019, the Ministry has successfully vaccinated 50,068 individuals. pic.twitter.com/5PRBqtx3Mr

Measles is a highly contagious virus that can spread to others through coughing and sneezing.

Each case can infect many other people and complications can lead to pneumonia, severe diarrhoea and encephalitis or inflammation of the brain.

The UK medics will focus on helping patients recover from these complications.

Over the past few years, childhood immunisation rates including measles has dropped significantly in Samoa making the country highly vulnerable to outbreaks. The majority of measles cases diagnosed in Samoa have been children and 90% of all deaths so far are of children under the age of five.

“This deadly measles outbreak is having a devastating impact on the people of Samoa, particularly children, who urgently need our help," says International Development Secretary Alok Sharma.

“The UK is stepping up to do all we can to prevent the further loss of life.”

The UK team’s work to treat Samoan children is part of a wider international push by UK aid to stop premature deaths, including through vaccinating against preventable diseases.

DFID supports various organisations that work to strengthen global health including the World Health Organisation, UNICEF and Gavi, an international vaccine alliance, who are hosting a replenishment summit in the UK next year.

The UK team flew out from Manchester Airport today and are expected to arrive in Samoa on Sunday, where they will embed with AusMAT, initially for two weeks.

Their work will begin in the main hospital in Samoa’s capital Apia on Monday morning.

"Alongside our partners Humanity & Inclusion we’re pleased to be able to support our AUSMAT and Samoan healthcare colleagues who have been working tirelessly to save lives and alleviate suffering.

“We’re grateful that our team of dedicated clinicians are able to provide expert and specialist care to those affected by the measles outbreak in Samoa with funding from UK Aid from the British people”.