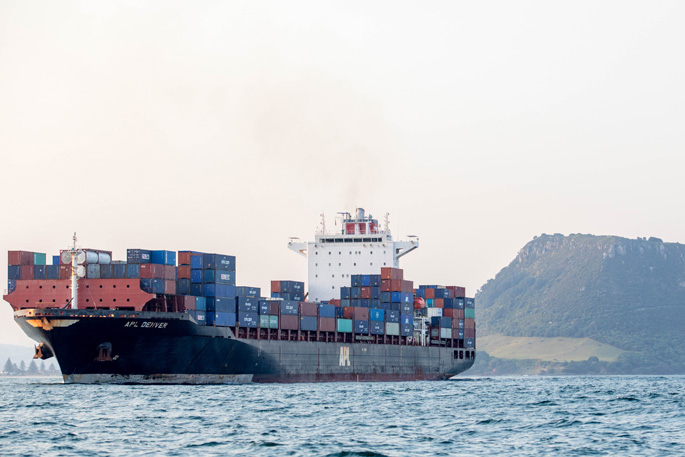 Container ship APL Denver transporting the final shipment of kiwifruit for the season from Port of Tauranga. Photo by Jamie Troughton/Dscribe Media Services.

The last of New Zealand’s successful 2019 kiwifruit crop has been shipped, with four containers of Zespri Green leaving Tauranga for North Asia, unloading in Hong Kong and Taiwan.

Around 70 tonnes of the Bay of Plenty-grown kiwifruit was loaded onto the APL Denver this week which is expected to reach the first port in 15 days.

“Our premium Zespri SunGold and Green Kiwifruit are more popular than ever, and over the course of the season we’ve moved 44 full charter shiploads and 17,160 containers, or more than 500,000 tonnes in total, to our markets,” says Blair.

While the number of containers shipped was slightly down on the previous record year, the 2019 season was still the second-largest crop ever harvested by New Zealand’s kiwifruit growers while it also marked the first season Zespri exported more SunGold than Green.

“This was a significant milestone for the industry. Zespri SunGold was developed through Zespri’s partnership with Plant and Food Research, after many years of research and significant investment by New Zealand growers. Owned by Zespri it’s generating strong returns to New Zealand communities and to our licensed growers offshore and we’re excited about the international demand for it.”

Blair says that amidst another busy season, it was great to see fruit arriving in Europe and China earlier in the season than the previous year, helping to meet demand.

“The 2019 season saw our kiwifruit mature earlier meaning we could ship our kiwifruit to consumers earlier in the year and get the season started with a lot of momentum, delivering for consumers around the world.

“We’ve also received feedback from the markets that the fruit is one of our best-ever tasting crops.”

“As we come to the end of the sales programme for New Zealand fruit we’re transitioning to Northern Hemisphere production. With that crop harvested and being packed, we’re forecasting a total of just over 19 million trays through our partnerships with growers in Italy, France, Japan, Korea and Greece driving strong returns to those communities.

“Demand for our fruit continues to grow faster than our ability to meet it and we’re working hard to boost our production so we can continue to supply the world’s leading portfolio of branded kiwifruit all 12 months of the year.”

Blair confirmed that planning was already underway for the start of next season’s New Zealand crop, with the first vessel expected to export the new season’s fruit in March 2020.