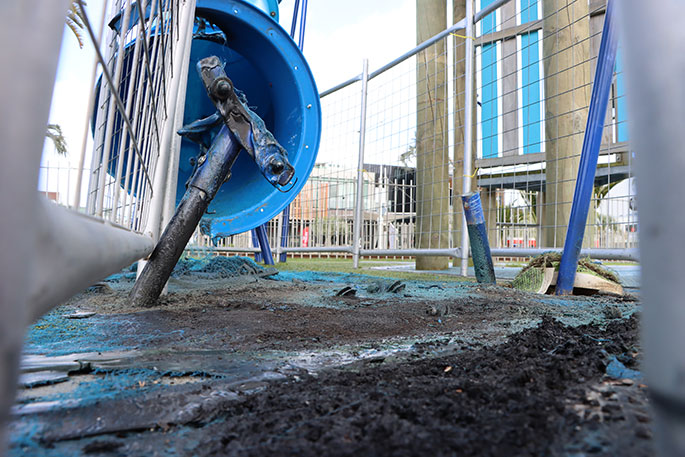 Damage to the slide on The Strand. Photos: Daniel Hines/SunLive.

A popular Tauranga slide torched twice this year will not be open this Christmas.

The slide, which is part of the playground on The Strand, was deliberately set fire to on two separate occasions. The first time was back in October and the second was on November 13.

On November 13, Tauranga Fire Brigade was called to the fire on The Strand, near Wharf Street, just before 5am.

“Firefighters spent about half an hour at the scene.”

Police were speaking to two people in relation to the fire. 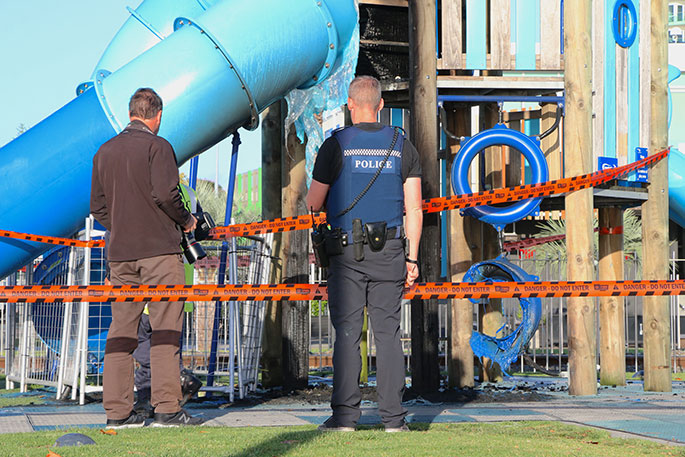 “Following the deliberate lighting of our children’s slide along the Strand on 13 Nov it will be closed until March 2020,” says Tauranga City Council on Facebook today.

“This incident was very disappointing and our team is doing their best to have it repaired as quickly as they are able.

“Currently, pricing to repair the slide is being put together and our insurance company will then decide whether to repair or replace it.” 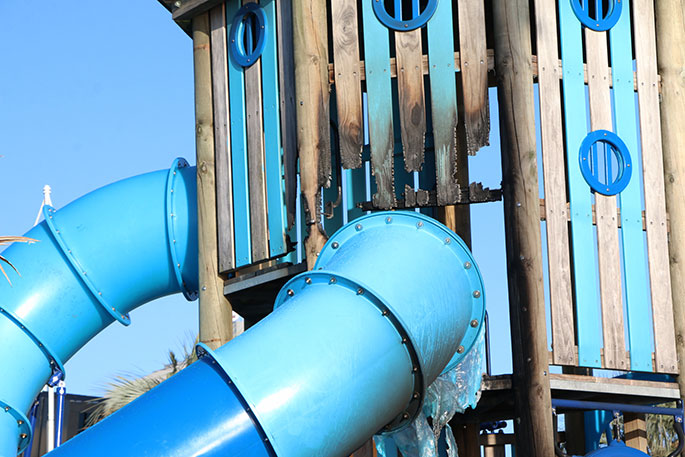 … what kind of idiot would want to do this, but I agree, it could have been resolved and fixed more quickly. I agree with Slim Shady here. And we do need more CCTV, with prosecutions brought, based on the evidence collected.

Surely the council has insurance? Surely whoever installed the equipment can replace the unit as a whole, paid for by the insurance? Oh, and have cctv cameras watch the new one...

I can’t say I’m surprised. Drug dealers and ‘beggars’ act with no fear on Wharf Street at all times of day. There are simply not enough Police patrolling about to deter crime happening. They just turn up afterwards, in triplicate, to stand about scratching their head. We need more Police, on patrol, getting in the faces of low life, preventing the morons from committing their mindless acts in the first place.

4 to 5 months to fix a kids slide. You can build a house in less time than that. Why does everything take sooooooo long to fix in Tauranga.

Has CCTV identified the people responsible?

This would have been covered by insurance. New slides could and should have been ordered immediately, made and installed within 2-3 weeks. However obviously money has been used on other ’more important’ projects including some Tauranga councillors self appointed pay rises.... Get it together council team and start putting the community that pays the bills first! This is poor management, again!