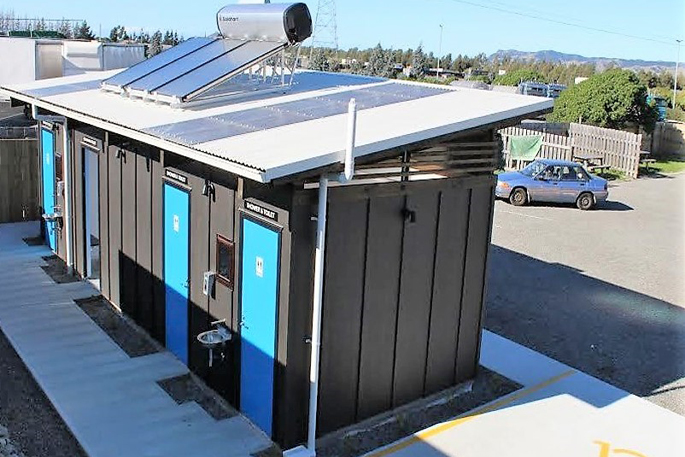 The KiwiCamp facility planned for Waihi Beach will be in action by Christmas, with installation about to start at the Bowentown Domain carpark on Seaforth Road.

The KiwiCamp facility is expected to arrive on-site during the week of December 9 so that it will be ready for use by Christmas, says Western Bay of Plenty District Council Reserves and Facilities Manager Peter Watson.

The arrival of KiwiCamp in Waihi Beach was delayed earlier this year while consultation took place with the local community as to the most suitable location of the facility.

“We believe KiwiCamp will be welcomed by freedom campers and other visitors – and it will take the pressure off other sites in the Waihi Beach area where freedom camping has caused some concern in the community,” says Peter.

Through a pay-as-you-go digital key system, KiwiCamp provides cooking, dishwashing, ablution, laundry facilities, waste and recycling options and wireless internet and device charging. Anyone can use the facility’s services provided they have KiwiCash digital keys and use of the toilets is free.

KiwiCash is a smart way of accessing KiwiCamp facilities anywhere in New Zealand, using KiwiCash Digital Keys. Digital Keys will be available for purchase for $5 at all five Council area offices in the Western Bay from the beginning of December.

Freedom campers wishing to camp overnight in the carpark must still comply with Council’s Freedom Camping Bylaw which requires any vehicle to be self-contained and only stay for a maximum of three nights in any four-week period.

Complying vehicles must stay within approved areas. Council has 47 freedom camping sites across the District and Council employs a security firm from October to March to monitor and ensure compliance with the bylaw.

Council is one of 30 local authorities nationwide to gain $200,000 from the Ministry of Business and Innovation and Employment for KiwiCamp as a measure to alleviate the community’s concern about the influx of freedom campers to Waihi Beach over summer.