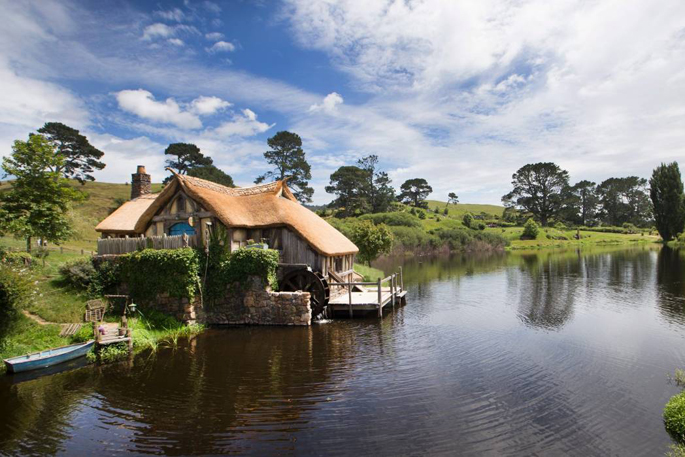 Hobbiton visitors can now journey through the sky, with two daily flights available to and from Middle Earth. Image: Stuff.co.nz

Flights from Auckland to Matamata for Hobbiton fans are expected to bring "vibrancy" and "life" to a tired airfield.

Fly My Sky Director, Keith McKenzie says the company has been working with Hobbiton for months and is very excited to be the first to provide a flight service for Hobbiton tourists.

"Often travellers in Auckland would like to go to places like the Hobbiton Movie Set, but don't have the time. This service will allow Hobbiton fans to visit the destination without the added hours on the motorway," says Keith.

"It will also give an add experience to complement the Hobbiton Movie Set experience with a specular view over the country, which is nothing like anywhere in this world."

The flight company will be using a pre-existing site at the Waharoa Aerodrome and shuttle services will take the travellers to the Hobbiton Movie Set site.​

While flights were meant to begin on November 18, Fly My Sky Director, Keith McKenzie, says no bookings have been made yet.

"We've had a delay in being able to advertise these flights due to strict rulings on the 'Hobbiton' brand and putting procedures in place, which has slowed down the process.

"At this stage we are busy doing large amounts of marketing with wholesalers and retailers with a great amount of interest being shown.

"We expect future bookings to be very popular, but like any new business it will take some time to gain significant traction and become an established product.

"We are looking forward to establishing a regular service to Matamata and the Hobbiton movie set during the summer season and a slightly reduced service during the winter."

Hobbiton has worked with many coach and helicopter providers out of Auckland but this is the first providing transfers via plane.

"It's great to have more transport options available for visitors looking to visit us here at Hobbiton Movie Set. We're very supportive of this new tour experience and look forward to hosting their guests using the service," Hobbiton general manager of sales and marketing Shayne Forrest says.

"The tour experience once the visitors arrive at Hobbiton Movie Set will be consistent with our other tours. Like all other Auckland providers, they will be transferring guests to our location on Buckland road where they will join one of our tours of the Movie Set."

Local Matamata aerodrome users are also excited about the possible tourism opportunities to come out of the Hobbiton flights.

"They [My Sky] didn't consult with us but we support any activity that will bring life to the airfield and benefit Waharoa and Matamata," Matamata Aero Club president Anna Doerr says.

"We know there has been a bit of a discussion about the flights, with the aerodrome being a recreational airfield, but we have no problem with the service."

Sky Venture pilot Peter Ryan, who regularly flys in and out of Waharoa Aerodrome, said it's a smart move for the Matamata township and hopes it's a catalyse of more to come.

"We've had no consultation with the users to my knowledge, but they're just going to bring people into Matamata to Hobbiton, which commercially is a good thing," says Peter.

"They won't interfere with the flying people here because it will just be an aeroplane arriving and later on it will be departing.

"It's a good commercial decision going on. Hobbiton people pay a lot of rates and bring a lot of money into the town so I would encourage that.

Aligning with the Provincial Growth Fund to expand on the use of the Waharoa Aerodrome, Peter says he would also like to see the old aerodrome campsite to open again. The campgrounds closed in 2017 after an investigation into allegations against the campground's cleaner.

"Ten to 15 years ago it was bringing in $23,000 a year, with Hobbiton growing like it is it would be bringing in $40,000, so we won't have to worry about landing fees for visitors and instead make it welcoming for all visitors.

sounds like just another way to gouge overseas visitors