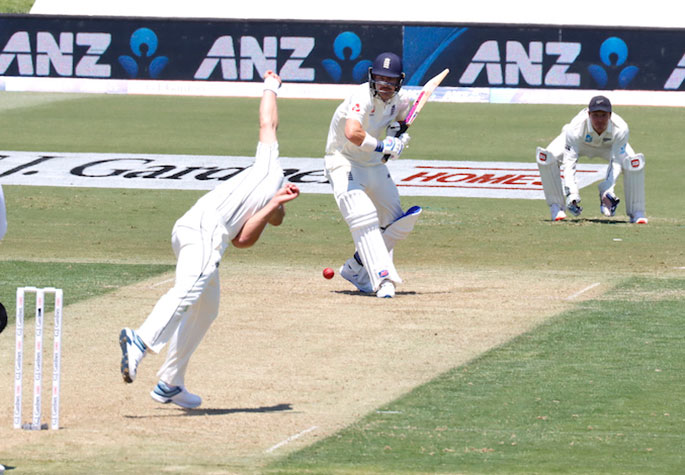 The Black Caps beat England in the first Test.

The Black Caps have won the opening cricket Test of the summer, beating England by an innings and 65 runs.

Look back at how the match unfolded here.

The victory at Bay Oval in Mount Maunganui gives New Zealand a one-nil lead in the two Test series.

Going into the final day of the Test, England were 207 runs behind New Zealand's first innings total and three wickets down.

England needed to bat the entire fifth day to save the match.

However, after tea New Zealand pace bowler Neil Wagner claimed his fourth and fifth wickets to wrap up the England innings and the win.

Wagner took three wickets in 17 balls for just one run as England collapsed from 132-5 to 138-8 before tea, then broke a 59-run ninth-wicket partnership between Jofra Archer and Sam Curran after they had threatened to thwart the hosts.

The left armer then trapped Stuart Broad in front for a first ball duck to end England's resistance at 197 and end with figures of 5-44 from 19.2 overs.

The last time the two sides faced each other in a Test series was two summers ago, back during England's tour of Australia and New Zealand between 2017/18. New Zealand won that series 1-0.

The final Test of the this summer's series starts on Friday at Seddon Park in Hamilton.

The two-match series is not part of the ICC World Test Championship so no points will go towards the competition.