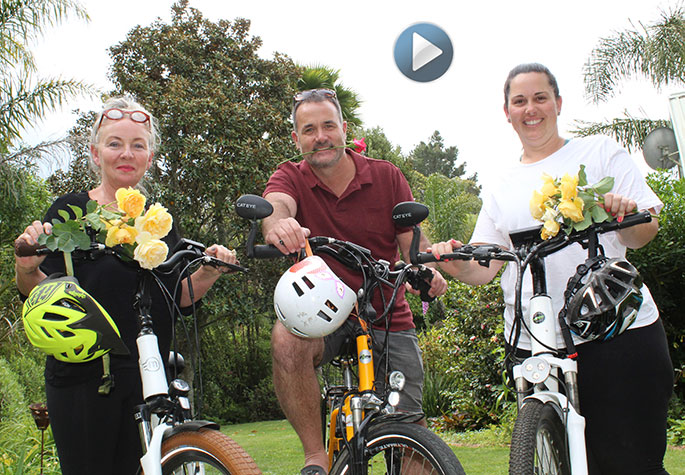 Next year’s BOP Garden and Art Festival will include a bike trail.

That’s one of the new aspects of the festival announced at the festival’s one-year-out launch, called Sowing the Seeds, held on Wednesday night.

Festival director Marc Anderson says the trail has been designed to get those on bikes to gardens in a relaxing and fun way and will be part of a Te Puna section of the garden and art trail.

The November 2020 festival will include various new events and sponsors, says Marc who, last year, introduced the Bloom in the Bay concept to the festival, attracting 13,000 people. The 2018 festival drew attendance figures of 29,000.

Marc was delighted to announce on Wednesday night that about 70 gardens and art stops had already been confirmed for next year, including 30 per cent of gardens new to the festival.

Over the years the biennial festival’s hub has been based at The Lakes, and last year at the Historic Village.

Marc thanks those who had made those venues possible and announced that next year’s Bloom in the Bay festival hub would move to Tauranga racecourse.

“As the festival is growing it has become apparent that the site had to grow with us. There are great facilities at the racecourse and plenty of parking.

“We are proud to be leaving a legacy of eight concept gardens at the Historic Village for the public to enjoy, and will now be spreading that gardening creativity further for people to enjoy elsewhere.”

Bayleys will again be the overall festival partner and the actual garden and art trail sector of the festival will be supported by Palmers Bethlehem. Tui Gardens will sponsor next festival’s concept gardens.

The winner would be announced at the festival. An emerging artist award will also be introduced to encourage would-be artists to develop their skills, or to prompt existing artists to take their work to the next level. This new component is being brought to the festival by The Weekend Sun.

A Garden Mentor Scheme has been introduced where an expert will be teamed up with a gardener to help them develop their perfect garden with confidence and creativity. This year’s mentor will be garden design expert Ceilia Laity, whose own garden will feature as a newcomer to next year’s festival.

Included for the first time in the festival line-up will also be Gardens on Wheels.

This addition - the brainchild of the Te Puke Centre Charitable Trust - will be Te Puke based and will feature gardens on the back of trucks and inside car boots.

Next festival’s ever-popular long lunch will be held at the racecourse and sponsored by Ingham Mora; while the festival gallery (which will feature one piece of art by each festival artist) will be brought to the festival in association with Craigs Investment Partners.

Kale Print, Burley Attwood Law and Priority One are also coming on board as sponsors next year.

Mills Reef Winery will provide The Bar at Bloom in the Bay, while Farmer Auto Village is once again the festival’s Official Drive Partner. Continued financial support will be received from Tauranga City Council and Tauranga Energy Consumer Trust.

Speaking at Sowing the Seeds, BOP Garden and Art Festival trust chairperson Julie Carlson described the festival as a true celebration of the region.

“It’s a privilege to enter these gardens and experience the talents of both gardeners and artists. I love the buzz of people enjoying all this together.”

She announced the introduction of yet something else new –The Bay of Plenty Garden and Art Festival Acorn Fund is now up and running and it allows donors to contribute to the future of the festival. This is one of the many ways The Acorn Foundation creates opportunities to give back to the community.

Sowing the Seeds was held at Farmers Auto Village.