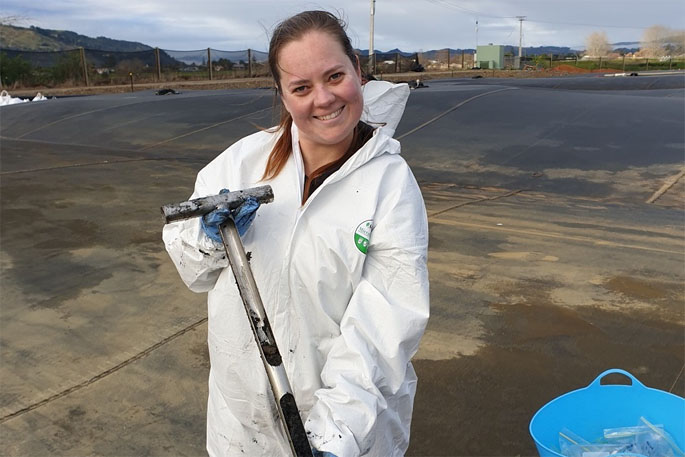 Oyster mushrooms are helping to clean up a historically contaminated timber processing site in Whakatane, and a University of Waikato student is helping to confirm the fungi strains being used.

University of Waikato Master of Science and Research student, Sharan McCleary, is working as part of a project between Waikato and Massey Universities, and Bay of Plenty Regional Council, using bioremediation to rehabilitate the Kopeopeo Canel in Whakatane.

The canal was contaminated between 1950 to 1980, during the operation of the old Whakatane Board Mill. Waste containing pentachlorophenol, used to treat timber at the mill, was discharged into the canal contaminating it with dioxins.

Sharna says the remediation project is using two different types of fungi and bacteria consortium that all work together to break down the dioxins and clean the canal’s contaminated sediment.

Oyster mushrooms have been used overseas to clean up contaminated sites including oil spills, toxic ash left behind after bush fires and even boat fuel pollution, but Sharna says it was the first time the process has been used for dioxin contamination in New Zealand.

In August this year the project involved dredging 5.1km of the canal, collecting 35,000m3 of the contaminated sediment into huge geo bags for treatment.

Sharna says during the collection, they added agricultural lime to neutralise some of the acidity in the sediment, as well as a wood pallet slurry and wood pallet icing on top of the bags, to encourage the mushroom growth.

“We then cut little holes all over the bags and inoculated them with the fungi and bacteria. It’s quite amazing to go back after a length of time and cut a hole in the bag and see oyster mushrooms pop out,” says Sharna.

Her role in the project is to develop a quality control method and use genetics to confirm the fungi inoculum they are using is the oyster mushroom species intended.

“The main fungus is an oyster mushroom, the same kind you can grow and eat. It’s part of a group known as white rot fungi which are well known to break down wood and very hard structures like lignin,” she says.

Sharna says her testing has also found some naturally occurring fungi in the sediment and she is currently trying to identify those strains.

“Because they occur there naturally, we assume they can survive pretty harsh conditions. If we know the genetics of the fungi, we can look at the specific genes and find other strains of fungi that might break down the contamination a little bit better or a little bit faster.”

Sharna says the bioremediation process takes many years, with real results not expected for another 10 to 15 years. The alternative however was to do nothing and simply contain the site, so it posed no risk to humans or wildlife. Other treatments were chemical based and expensive.

“This is the best option. It’s nature healing nature which is a very New Zealand way of doing things.”