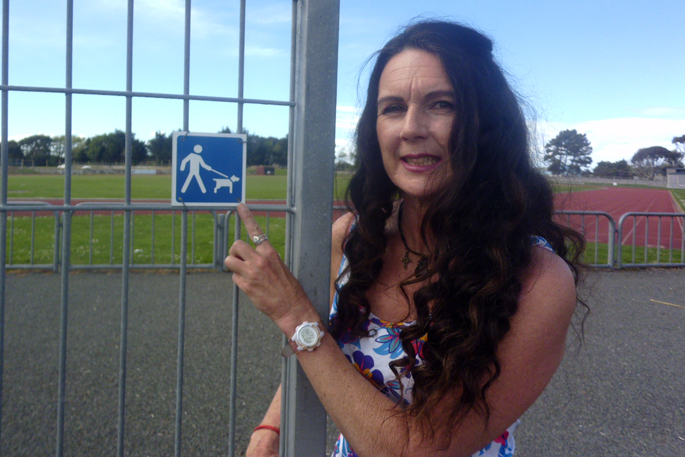 Wendy Baker with a sign she encouraged a council to install. Supplied image.

A Tauranga woman is on a mission to improve dog control in New Zealand.

She’s been advocating for dog control since 2009.

“I've been concerned and campaigning for a better New Zealand as far as dog control is concerned since 2009.

“I consider myself to be an advocate for better dog control in New Zealand. “

Wendy says there are too many dog bite injuries in New Zealand every year.

“Every year there are thousands of dog bite injury claims. My petition asks that the government initiates a national education campaign regarding responsible and safe dog control.”

Wendy has been a victim of a dog attack and says no one should have to experience that.

“I was running past a rural property and the dog was not contained properly on that property, and it ran out at me and attacked me from the side.

“You can imagine how that would have given me a shock because it's not just about the injury, it's about the shock of something.

“I don't think people understand the impact that a dog attack or a dog bite can have on them, especially if it's out of the blue and it's not to be taken lightly.”

The incident occurred in 2011 and Wendy says this caused her to campaign even more for her cause, but it’s not just about her experience.

“This is about the broader general picture of as a nation it’s impacting thousands of people per year.

“This is not just regarding dog bite injuries, it’s the fact of general overall responsibility and respect for other people and their animals and being considerate and understanding that other people have different recreational and personal lifestyles.”

She would like to see dogs contained on properties correctly and not intimidating people by barking as well as dogs being leashed when they approach someone if they have been off lead.

“I just feel that it's so important for people to control their dog effectively whether on a private property or in public.

“It's just an appreciation that people may not want your dog near them.”

The Tauranga City Council requires that people place their dog on a lead when approaching people or other animals.

TCC’s website says Tauranga currently has more than 13,000 registered dogs, which is one dog for every ten people.

Wendy says she knows there are a lot of responsible dog owners but there are people who aren’t.

She says part of good dog control is understanding each council’s by laws for dog control and the Dog Control Act 1996.

Over the years, Wendy has also encouraged councils to erect more signs in public places about dog control laws and has been successful.

Dogs also need time to explore, that’s what they do, I do not consider having dogs permanently leashed permanently responsible loving dog ownership. A leashed dog will feel threatened as it is restrained and can’t freely socialise with the other dog. But yes know your dogs temperament and don’t choose aggressive breeds you can’t control.

My friend in England had a yappy toy dog off its leash wanting to play with his beautiful white dog (on a leash). Warned the yappy owner several times. "Oh they only want to play" said yappy owner. Yappy owner had to take yappy dog to vet. Moral of story.... know your dog breeds. What looked like play stance was Attack Stance of friends Japanese Akita (fighting dog). Justin T.

You certainly get my backing Wendy. I have lost count the amount of times my wife has had dogs rush her, some to play, some to attack, two that drew blood; so any form of outing is fraught with anxiety when a dog is heard, let alone seen. My wife will not go for a walk without me to protect her and this is all because of well meaning dog owners who have no idea how their pet and they are viewed by others when they don’t use a leash. It’s not rocket science. In public always use a leash (even that is no guarantee of control). Justin T.

with Wendy. We are dog owners (2) & walk them on a leash at the Carmichael Road Reserve. Our dogs are well socialized show dogs but we constantly have other dogs with unknown temperament rushing up to them because their owners think its ok to walk them off leash. The walk on leash signs are there but they choose to ignore them - but would probably be the first to complain if their dog was bitten.