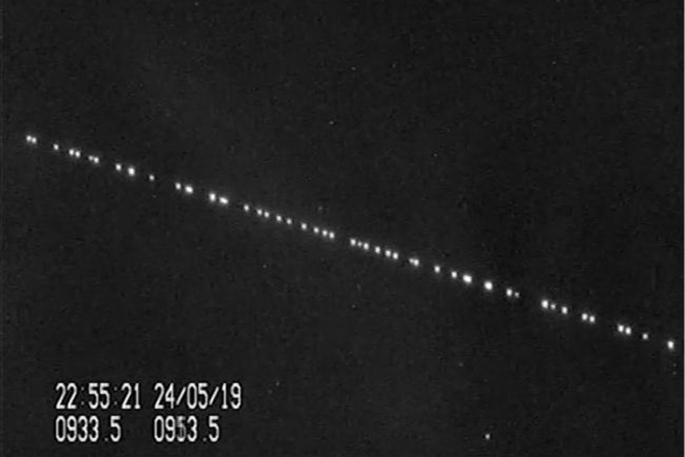 This view of SpaceX's first Starlink satellites in orbit was captured in May 2019 by Netherlands-based satellite tracker Marco Langbroek. Image credit: Marco Langbroek via SatTrackBlog

There has been an updated time given for the Starlink train of satellites passing overhead tonight. The new time is just before 9.50pm.

"There were some discrepancies last night in the data from different sources and the predicted pass at the time earlier given by Heavens Above was a no show," says Tauranga Astronomical Society president David Greig.
"The latest data, confirmed by another site, indicates that the Starlink train will rise at just before 9.50pm tonight and the train will pass through the highest point of about 32 degrees from 9.53pm to 10.02pm, from first object to the last.
"Unfortunately there is now an awful lot of smoke haze in the sky from the Australian fires and it looks increasing unlikely we will be able to see anything."
The new updated list of data at the Heavens Above website can be viewed here
Earlier, 12.30pm:

Local astronomers and anyone else who loves to watch the stars at night are up for a treat tonight, if the clouds stay away.

“Tonight there will be an opportunity to see a spectacular train of 60 Starlink satellites crossing the sky in a single file row,” says Tauranga Astronomical Society president David Greig.

The lead satellite in this 'string of pearls' should be coming into view about 9.24pm. 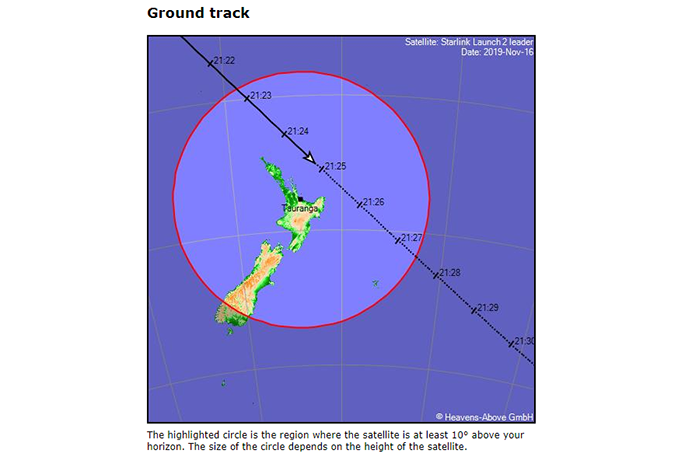 “On Sunday November 17, the view will be much better with the satellites passing much higher and right across the sky from horizon to horizon,” says David.

SpaceX deployed the second batch of 60 Starlink satellites on November 11 into a 280-kilometre-high orbit, around 160 kilometres below the initial deployment orbit of the first 60 Starlink craft in May.

SpaceX have said that the lower orbit will allow non-functioning satellites to more quickly re-enter the atmosphere and burn up. The satellites launched this week are “100 per cent demisable”, meaning they are designed to completely burn up during re-entry.

“The leading satellite will be at 10 degrees altitude above the NW horizon by 9.24pm tonight,” says David. “It will be at its highest point of 70 degrees above the SW horizon just before 9.27pm and then will pass across to the SE until 9.30pm.”

Dave has posted a chart from the Heavens Above website to the Tauranga Astronomical Society’ Facebook page that displays the Starlink visible passes. 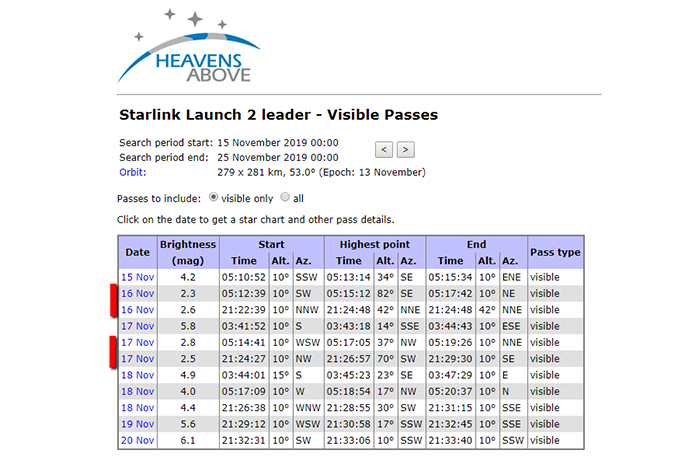 “The lower the number for the brightness magnitude on the chart, the brighter the satellites will appear,” says Dave. “A magnitude of 6 is at the limit of human vision on a dark, clear night. A negative magnitude number is very bright. The brightest passes are marked with red on the left of the chart.” 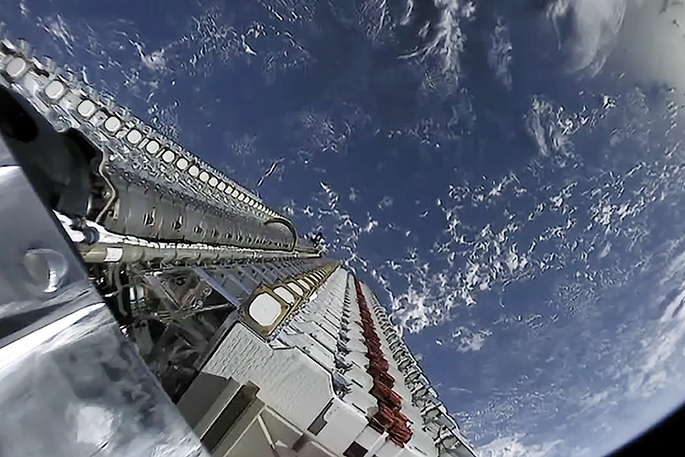 A view of SpaceX's first 60 Starlink satellites in orbit, still attached and awaiting deployment, after their launch on May 23, 2019. Image: SpaceX

Elon Musk’s SpaceX sent its second batch of Starlink satellites into orbit as part of its plan to blanket the earth in a network of up to 42,000 satellites, thus creating a super low latency telecommunications network, but also raising fears of a space-junk disaster that could impede research from telescopes on earth.

Scientists have been voicing their concern with SpaceX over the plan, which they predict, will wreak havoc on the field of astronomy. When the first batch of Starlink nodes launched in May this year, astronomers were alarmed at their brightness. A SpaceX spokesperson has said that the company will take steps to paint the Earth-facing bases of the satellites black to minimise their reflectiveness.

A live simulation showing the current location of the Starlink satellites can be found at https://heavens-above.com/starlink.aspx

SpaceX is planning to begin offering its own satellite internet service in 2020.

The key for any satellite tracker is to know when and where to look. Fortunately, there are several websites that offer forecasts to help amateur observers identify which direction to look and when for any area.

The tracking site Heavens-Above.com here already has a Starlink Launch 2 page ready. You can visit this Starlink page on the site to see the orbit of the new satellites. The direct link to the Starlink Launch 2 visible passes forecast is here, but don't forget to update the "location" tag in the upper right of the page to get your specific visibility forecast.

The next site to try is N2Y0.com, which automatically picks up your coordinates from your browser to show when and where particular bright satellites - and yes, the International Space Station, too - will be visible.

Another useful site is CalSky. CalSky asks you to enter the satellite you're looking to spot, either by name or official number, if you know it. You can simply type "Starlink" and click "Go!" to find your personal forecast under "Sightings Opportunities" for each satellite.

Or you can just take Dave’s advice.

“You might like to set a reminder on your phone and remember to be looking to the North West tonight at 9.24pm,” says Dave. 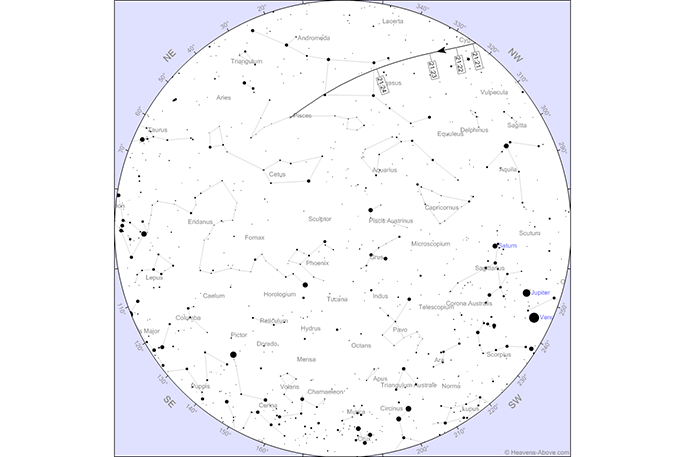