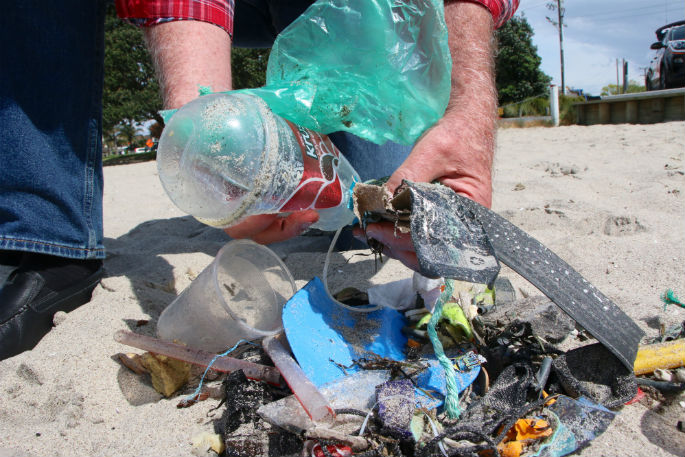 A bag of shame – beach rubbish collected by a visitor. Photo: Daniel Hines.

There were plastic bags and lots of very fine shreds of plastic fibre.

And it was all recovered from Papamoa Beach at the weekend when a leisurely hour-long surfside stroll turned into a salvage mission, a rubbish recovery operation by a visitor.

And the visitor herself was “disgusted” enough to drop by The Weekend Sun with her bag of rubbish, her bag of evidence, before leaving town.

“I was quite upset at what I found,” says our visitor who chose not to be identified. “It’s not about me but about people who don’t seem to understand what they’re doing to the environment.”

Our visitor’s impression of our beaches isn’t the one portrayed in the glossy brochures and she’s probably gone home to Northland to tell people that the pristine Bay of Plenty coastline, the best beaches in the country, are a figment. “Haven’t you just cleaned up after the Rena?” asked the tourist. “Now this.”

Her experience has prompted the Papamoa Surf Life Saving Club to issue a timely reminder to everyone using the ocean – beachgoers or boaties – to make sure they take extra care in the marine environment.

"But it's even worse at this time of year, when wildlife is breeding and is at a particularly sensitive stage.

“You may think that it's a case of 'not in my backyard' but all it takes is one good storm and that empty bottle or plastic debris may soon actually be washed into your backyard. We're really grateful to the kind souls who patrol our beach, picking up after others, but we really wish it wasn't necessary.”

Kind souls like Brenna Roband and the hundreds who join her community Projects by Bren clean-up events.

“I am surprised to hear this,” says Brenna. “The clean-up we did a fortnight ago left Papamoa beach incredibly clean and the volunteers found most of the rubbish in the dunes and around the car park rather than on the sand itself.”

Brenna says weather has a huge impact on where the rubbish ends up. “So it can get blown onto the beach or washed up.

“Ideally we want all rubbish to be put in its rightful place, the bin, so it does not make its way anywhere else and has no impact on the marine environment.”

Nearly 30 kilograms of rubbish was collected during the last clean-up of Papamoa beach and surrounds – 41 per cent of it recyclable.

“Sadly some people do not think about the impact leaving their litter on the beach. Generally people in the Bay are good at taking their waste with them, and there are many people willing to do their bit to keep our coastline clean and beautiful and collect waste when they see it. But sadly, not everyone.”

Brenna’s next community beach clean-up is on Sunday, December 1, at Mount Maunganui.

Already more than 500 people have expressed ‘interested’ in the event. “Hopefully we will have a huge impact on cleaning up all around the main beach, Leisure Island and Pilot Bay before the summer rush.”

People can find out more about the clean up on Brenna’s Facebook page: @projectsbybren

Checked again today as Monday’s always the worse. Bins were empty and a person was picking up rubbish (works for the contractor ). Well done on sorting this problem out. I hope it continues

We have been calling the council about this

Every week for the last 3 weeks, ourselves and others have been calling the council about this problem. The rubbish and recycling bins at Stella place carpark have been overflowing and blowing everywhere. The last time we personally called we were told that the contractors had been called and claimed they did extra collections. I know this hasn’t been happening in fact because I decided to freedom camp there and check for myself as I am sick and tired of picking up rubbish blowing everywhere.