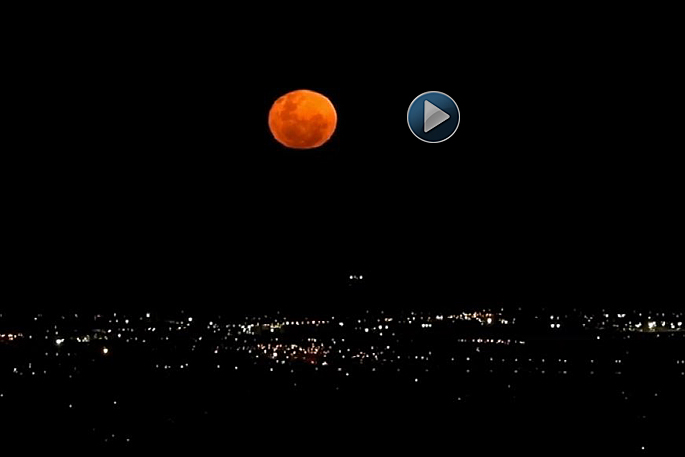 Sky gazers have been treated to an exceptionally red moon because of dust in the atmosphere from the Australian bush fires.

He says the moon is often orange or red as is rises over the horizon but it was enhanced yesterday.

“The moon is always a sort of yellow, orangey colour when it’s coming up over the horizon for the same reasons that we have orange, red sunsets which is scattering of light, it’s called rayleigh scattering, it’s basically the same thing that causes the sky to look blue as well.

“The moon may have looked particularly orange, red last night because of the fires in Australia but certainly when the moon got higher in the sky it was the normal white colour.”

David captured a waning gibbous moon that is 15.5 days old and 99 percent illuminated.

The full moon occurred on November 12.

He has shared the video on the Tauranga Astronomical Society’s Facebook page and received a lot of interest.

“We’ve had great reactions, there’s a lot of comments and likes on our astronomy Facebook page and it’s been shared many times.”

He says to get good shots or footage of a moon rise you need objects on the horizon for perspective.

“If you want to film a spectacular full moon rise it’s always good to have distant scenery near the horizon particularly buildings or trees.

“The more distant the familiar objects are the bigger the moon will appear it’s all just perspective and optical illusion.”

He says if you want to view the craters of the moon a full moon is the worst time to do so.

“The best time look at the moon is when it is a crescent or first quarter which looks like half a moon, then you’ve got some shadows in the craters and it’s the shadows that actually give the detail.

“People often think best time to look through the telescope is a full moon but all they see is a big white disc and no detail.”

David has a lifelong interest in astronomy that began when his father introduced him to it at a young age.

He says if anyone is interested in astronomy they should join or come along to the society.