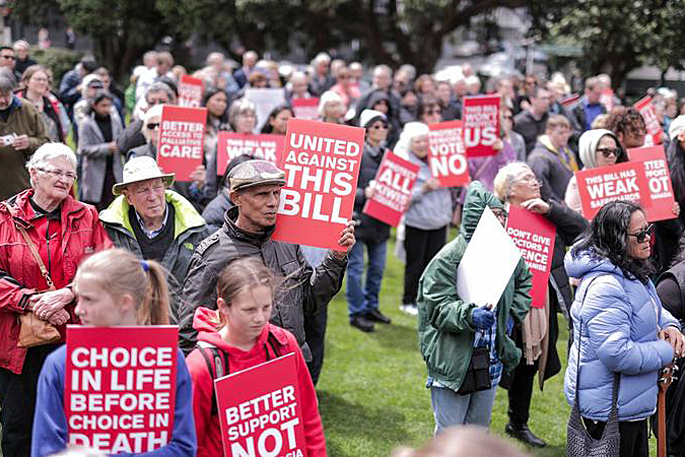 The third and final reading of the End of Life Choice Bill has begun in Parliament.

The member's bill, in the name of ACT leader David Seymour, would allow terminally ill adults to request a medically-assisted death.

It cleared its second reading 70 votes to 50 in June and is expected to pass comfortably tonight.

However, it will still take a majority referendum result at next year's election before the legislation can be enacted.

In a recent change secured by New Zealand First, it would first have to go to a public vote to be held alongside next year's General Election.

On the front lawn of Parliament this afternoon a protest group of a few hundred people brandished signs opposing the legislation - "caring not killing", and referring to the Bill's "weak safeguards".

Labour list MP Jamie Strange told the crowd MPs from across the House would support them in their opposition.

National's Alfred Ngaro, a list MP, told them the Bill was going ahead despite the direct opposition of thousands of New Zealanders, including some in the medical community - "still, here we are today".

He encouraged them to "keep the faith because there are those who believe that this is wrong".

David says he is "quietly confident" the Bill will pass tonight, but will continue working for votes up to the last minute.

"We've had the arguments - I don't think anyone will ever be able to say that Parliament didn't properly scrutinise this bill.

"It's been nearly two years since the parliamentary process started. And over that time we've kicked around every conceivable argument for and against the bill."

An now the "silent majority" will be heard with the referendum...........another reason to make the effort to vote when the time comes.