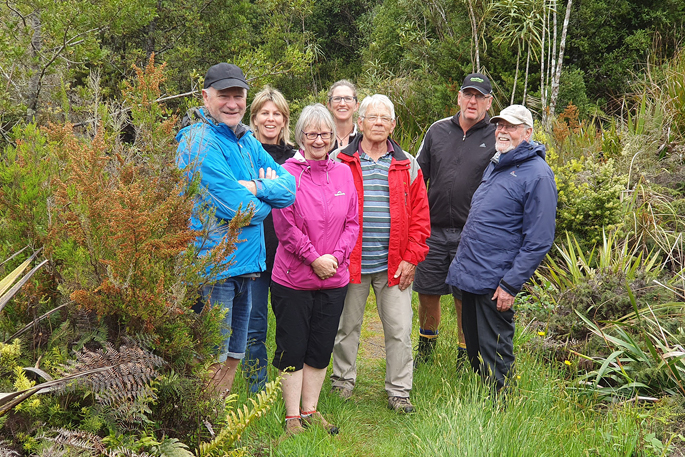 Last Sunday marked the proud culmination of years of hard work by a very special team with the opening of a new walkway in the Kaimai Mamaku State Forest Park.

The Pa Kereru Loop Walkway official opening, attended by around 60 guests, marked the end of a journey for those on the Mahi Boys work training programme. It's a programme with a difference, as all the participants are clients of the Bay of Plenty District Health Board mental health service.

"Sunday's opening was all about honouring the boys for the work they've done up here," says Mahi Boys Programme Team Leader Paul Mason. "I'm really happy that's the focus because they've done all the hard work and if it wasn't for these guys that track wouldn't be there.”

Paul previously worked in Tauranga Hospital's Mental Health Acute Inpatient Unit. There he observed some patients becoming involved in adverse incidents when bored and inactive. This was the catalyst for The Mahi Boys.

"They get a sense of pride from having been out working," says Paul. "They feel 'normal' in that when they're out here doing this they're just guys working out in the bush, they're not mental health patients. They learn some great skills. There are a lot of benefits."

The Mahi Boys programme has worked closely with Whakamarama Community Inc, who hosted the opening of the new 40-minute loop walk from The Blade carpark at the top end of Whakamarama Road. The walk is easy grade for families with small children and goes through a variety of habitats. It has several bridges over streams, and boardwalks through wetlands, as well as following historic tramways dating back to the 1920s when the area was logged for rimu and other native trees from the virgin bush of those days.

The backbreaking work they have undertaken on the walkway has included track construction and stabilisation and the building of bridges, walkways and drainage works. They have used flying foxes to move timber down into the gullies and at one stage a naval helicopter was even employed to help transport some of the tonnes of metal fill required for the track substrate. The rest was taken in by good old-fashioned sweat.

"It's a pretty cool operation and we get a lot from it," said Brandon, who has been one of the Mahi Boys for 8 years. "For a long time I was housebound and wouldn't go outside but being part of this has helped a lot with that, just getting out and meeting new people that I can relate to has been important for me. We've achieved a lot in the last eight years."

The programme's success is demonstrated by a decrease in average bed stay, a drop in readmission rates, and an improvement in participants’ general functioning and health. Some people have also now secured themselves part-time employment in the community.

"All the mahi programme participants are role models to what can be achieved with a can do/will do attitude."