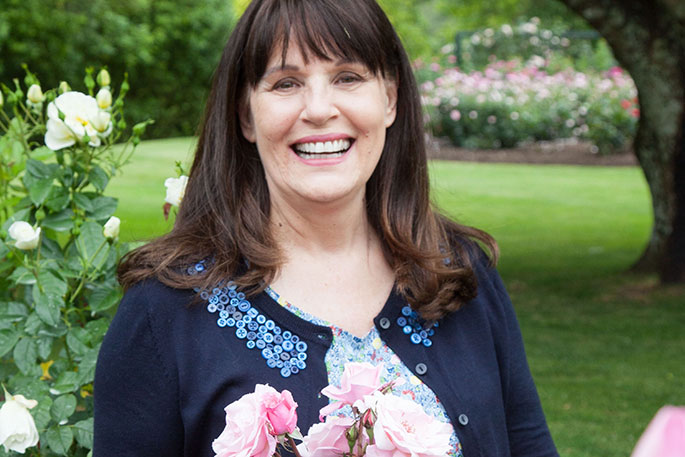 Julie Hardaker has a new rose named after her.

A week is a long time in politics. Three years seems like an eternity. But that’s about to change.

Three years ago, after retiring from two terms as Mayor, Julie Hardaker was promised a farewell gift from the City of Hamilton.

And this Friday, she finally gets that gift, and not because it was ever forgotten about.

It was, in fact, quietly growing. Secretly!

For Julie has had a rose named after her, the Julie Marguerite Rose, featuring a unique creamy pink colouring.

Bred by leading New Zealand rose grower, Tauranga based Rob Somerfield, of Glenavon Roses, the Julie Marguerite Rose will be sold commercially in winter 2020 at around $30 per plant.

Rob says his focus is to produce a plant that is disease resistant, easy to manage, with the colour being personal to the person it is named after, or a rose buyer.

The Julie Marguerite Rose was selected by both Rob and Julie who have watched carefully as it evolved over the past almost three years.

The breeding process can take over 10 years and currently Rob has a rose crop of 15,000 plants at about 20 centimetres high of which only about 800 will be selected for further trialing.

“If I can get two to three marketable roses in 10 years’ time I would be very happy,” says Rob.

The Julie Marguerite Rose will get its first public reveal at 3pm on Friday, November 15, during the Pacific Rose Bowl trial being held at Hamilton Gardens.

The winner of this trial, which starts on Thursday and runs until Sunday, is voted on by the public and the top voted rose becomes New Zealand rose of the year.

How did the Julie Marguerite rose get its name?

Julie obviously refers to her Christian name, while Marguerite is after Julie’s late mother, who was a keen grower and who had extensive gardens.

Rob Somerfield has won many gold star awards for his roses and will attend the launch.

He has been breeding roses in Tauranga for 36 years, releasing almost 50 roses, including the purple Dame Te Ata Rose presented to Maori Queen, Dame Te Atarangikaahu before her passing in August 2006.

Meantime, apart from celebrating the launch of her rose, Julie is busy with her own law practice, specialising in employment, relationship property and public law.

She also holds a number of governance roles.

Julie is the Government appointed chairperson of the Environmental Protection Authority and a panel member of the Ministry for the Environment Waste Minimisation Fund.

She also is a Government appointed member of two Lotteries Commission committees for significant community projects.

A board member of Governance New Zealand, she is also chairperson of Women on Boards.

Julie continues her work in the community, supporting a range of organisations providing services to Hamilton and the Waikato.