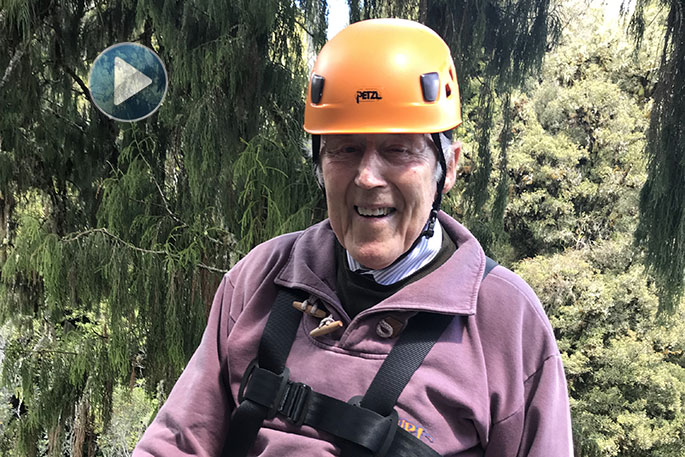 Richard Baillie celebrated his milestone 90th birthday by zipping around a native forest at Rotorua Canopy Tours, proving that there’s no age limit on adventure.

Ziplining through the canopies at 90 years of age was a milestone achievement for Richard, who has had a passion for adventure tourism since retiring, even bungy jumping at 66 years old.

Visiting with his wife Janet Baillie, 71, the two spent three hours zipping from tree to tree around the native forest in Rotorua.

The two went on the Original Canopy Tour, which features treetop platforms up to 22 metres above the ground, and ziplines up to 220m long through the canopies

“I’m terrified of heights, but we got out and did it anyway and had a fantastic time,” says Janet.

“The scariest part by far for me was stepping off the edge, but once we were away on the zipline, it was fantastic.”

The pair really enjoyed the support of the guides who ensured that the duo were well looked after, keeping the tour informative about native wildlife, as well as an exciting journey.

“One of Richard’s favourite parts was when the guides gave them mealworm to hold, and the birds came down and ate out of their hands. He really liked that,” says Janet.

“The weather was perfect – sunshine and not too much wind, and the guides were fantastic.”

Janet says the pair are passionate about getting out and living life to the fullest, refusing to let age dictate what they can and can’t do.

“You’ve got to get out and about, and continue doing things,” says Richard.

“You can’t just sit around and be a couch potato all the time, it’s important to keep active and stay excited about life.”

The duo, who hail from Kawerau, are passionate sequence dancers, and have ticked a lot of adventure tourism activities off their bucket list, proving that adventure isn’t just for the young.

“We’ve done the Shotover Jet, helicoptered up Mount Cook and around the Tasman glacier, completed the Ride the Rails in Taumaranui, we visited White Island this year, and have even jet boated up the Whanganui river,” says Richard.

“We’re going to keep on adventuring!”

Making the most of every day is especially important for Janet and Richard, who unfortunately experienced a severe car crash a few years ago.

“We were driving home from a dance in Tauranga late one evening in the rain. We came over a hill and there was a horse on the road,” says Janet. “The roof came off the car.”

Janet says the pair were blessed to come out alive.

“It really gave us a new lease on life, that accident,” says Janet.

“It’s shown us to make the most of every moment.”

The pair don’t plan on slowing down any time soon, with Janet’s 72nd birthday coming up in January the pair are sure to have another adventure planned soon.

However, in the meantime their ballroom dancing will keep the pair active.

“You’ve got to get off the couch, and keep active, and continue having fun,” say the duo. “You’re never too old for adventure!”