Land used for Defence facility gifted back to iwi 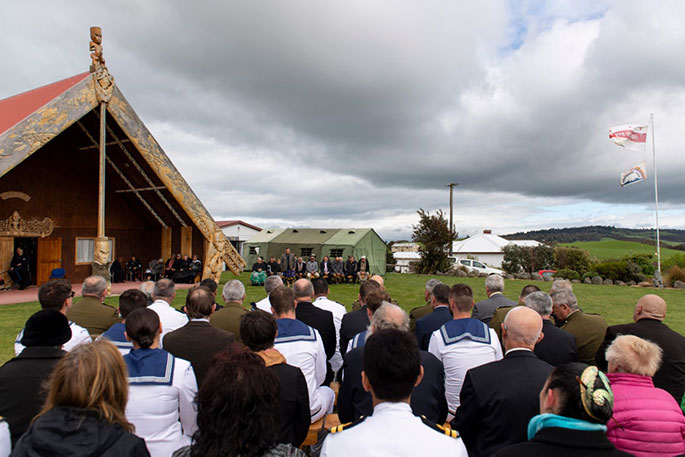 The New Zealand Defence Force gifted back 77 hectares of land five kilometres south of Waiouru to the Ngāti Rangi iwi at a ceremony at Irirangi on the weekend.

Land used by the New Zealand Defence Force to provide valuable support to ships during the Second World War has been vested back to Ngāti Rangi, a central North Island iwi.

The move to gift back the land at Irirangi, 77 hectares of land five kilometres south of Waiouru, is part of the NZDF’s Treaty of Waitangi Settlement commitments, under the Ngati Rangi Claims Settlement Act 2019, and within seven days Ngāti Rangi will gift the land back to the NZDF as a gift to the people of New Zealand.

Royal New Zealand Navy Chief of Navy Rear Admiral David Proctor, speaking during the blessing and unveiling of a toka (an argillite boulder collected from Whangaehu River) and plaque at Irirangi, acknowledged the significant sacrifice Ngāti Rangi had made to allow continued use of the land by the NZDF to provide security and protection to all New Zealanders.

“The NZDF has enjoyed a longstanding relationship with Ngāti Rangi and looks forward to strengthening this through working collaboratively and cooperatively to identify future opportunities,” says David.

“It is a time to reflect on the sacrifices of those who have gone before us, as we look towards the promise of tomorrow for our people,” says Che.

The vesting and gifting back is part of a redress framework agreed by the NZDF and Ngāti Rangi.

Irirangi, meaning “frequencies that float among the Heavens”, was established in 1942 and was commissioned as HMNZS Irirangi in1951.

The site provided valuable support to ships at sea for the remainder of the Second World War. At its wartime peak the station had about 150 officers and ratings, 80 of whom were women, who did most of the operating.

Today, the facility is operated remotely by the Naval Communications Station at Devonport Naval Base and a small number of staff remain to maintain the site.