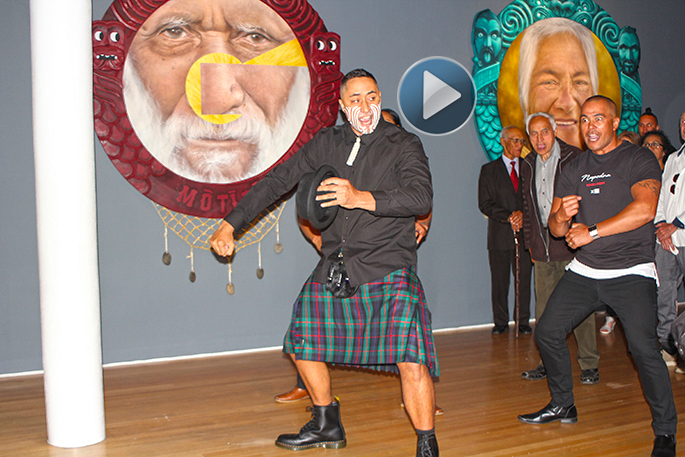 A son of Tauranga has brought his greatest treasures to the Tauranga Art Gallery.

The aspects of life that mean the most to Mr G will be on display over the coming months, in his first ever solo exhibition.

On the outside of the gallery, a single letter ‘G’ stands out in deep gold against a dark magenta, heralding this coming home. And, significantly, the theme of the show is simply haukainga or home.

“This is about me honouring my Tauranga Moana roots,” says Graham Hoete, or as many of us know him as – ‘Mr G’.

“My mum and dad are from here. But also the exhibition specifically honours my connection to Motiti Island and Matakana Island.” 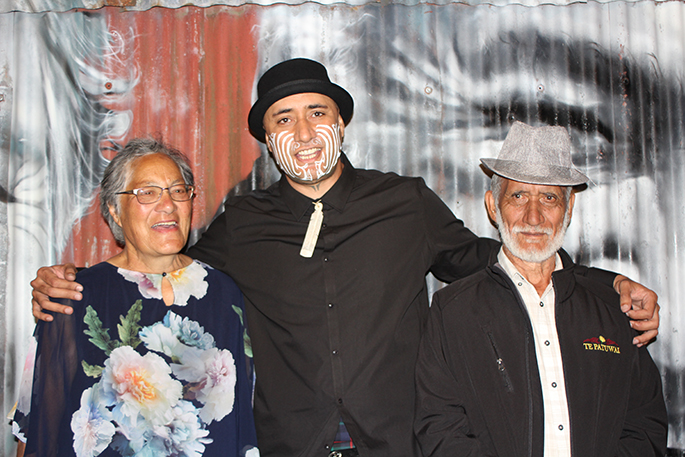 Graham Hoete with his parents.

A celebration of those connections and telling the unique stories that come from those places, is what he seeks to portray.

“It’s also an opportunity to show who I truly am as an artist and person, and what better place for me to do that than my hometown Tauranga.”

Mr G’s exhibition opened on Friday night, with family and friends gathering from Motiti, Matakana, Tauranga Moana and from around the country to be a part of the celebration.

“Graham could live anywhere in the world, yet he resides in Papamoa,” says Tauranga Mayor Tenby Powell. “We are so very privileged that, in this, Mr G’s first solo exhibition, he is taking a chance on us.

“He is opening up his home, his whakapapa, his whanau, and inviting us in. Maybe Mr G's exhibition will inspire more of us to do the same - to be more open, to build stronger context through connection, and stronger community through engagement.

"Telling our stories, celebrating our heritage, each and every one of us, from diverse cultures and backgrounds, have been brought together here in Tauranga Moana with the opportunity to connect, engage and grow, in this place, our place that we call home." 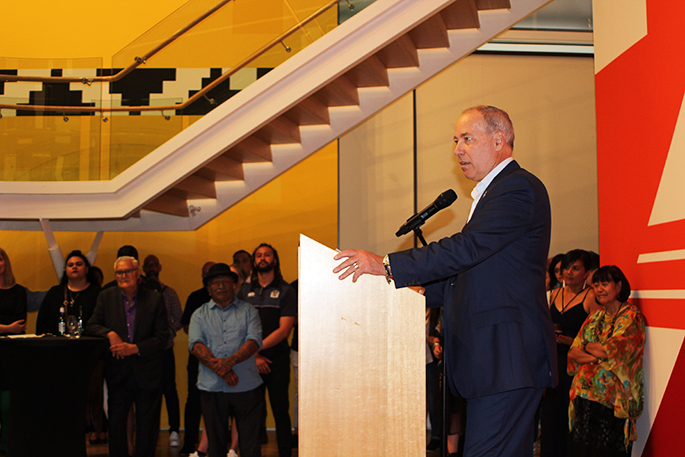 Mr G recently painted a sign with the word ‘Towel-Wronger’ on it, highlighting the mispronunciation of Tauranga that he often hears. He published a video and photo of the sign to social media, but this is an opportunity for the public to see it up close.

The sign is part of the exhibition, along with the video. There are also other strong pieces, ranging from portraits to bronze cast sculptures.

“My goal is just to be able to tell my stories honestly, with authenticity. To highlight how we can find beauty in the simple things in life, rather than the glitzy glamorous Hollywood stuff. It’s about how we define wealth.”

He draws from close family connections to explain what that sense of true wealth feels like.

“On Motiti Island there’s no power, it’s straight roads but such an enriching place to spend time. There’s simple things like fresh food, Mum and Dad with their veggie garden, fresh kaimoana, seafood.”

Wanting to draw his audience into a more multi-sensory experience he’s not only painted kina on toast, but also collaborated with Izakai Bar and Eatery to create three kina-based dishes.

“When I think of home, I think of kina and my upbringing on Motiti. I really wanted to make the kina a superstar in the show and celebrate it.

“The Japanese love kina too. I’ve been to Izakai where they do a fusion of Japanese and Maori food. So I asked them to come up with three signature Mr G dishes all related to kina.”

The kina dishes include a coconut infused dessert and the Japanese version of kina on toast and were available for a kina taste testing experience on Saturday at the gallery. They can also be selected from the menu at Izakai Bar and Eatery at Bayfair.

Hononga or connection is another key aspect to the show. 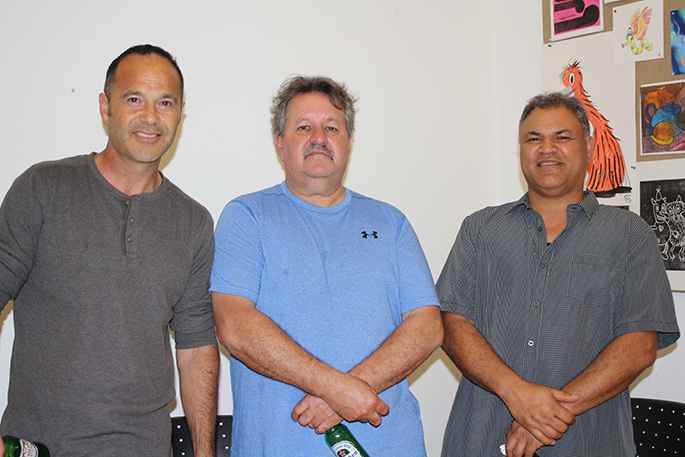 “I’m exploring the importance of whakapapa and genealogy to holistic and mental health. Making connections and knowing who you are brings context,” says Graham.

“When people introduce themselves on the Marae they stand and tell everyone where they’re from and people they are connected to. This is pepeha. One of the main pieces I'm doing is a self-portrait or a visual pepeha.”

On Sunday, Graham published a video to his Facebook page, acknowledging his own journey of dealing with mental wellbeing, and how the exhibition has made him realise that he wants to keep encouraging other people to keep moving forward and out of despair.

There was a huge response from the collective gathering on Friday night to Graham’s speech, where he acknowledged the support of his wife, family and friends, with waiata sung and a haka performed. Later, in front of works in the show, Mr G led a second haka, dressed in a Scottish kilt to acknowledge his Murray family heritage.

Graham’s celebration of family connections, how precious connecting back home is, exploring one’s own whakapapa and where we each come from, is why he has created this show.

Some of the work on display has been drawn from his own life experiences.

“Also from history. For example in the portraits of my Mum and Dad, it's not just painting a beautiful picture of their faces. In the frames I tell their history and connection to where they’re from.

“With Maori carving there are a lot of symbols, patterns and motifs that have special meanings. It’s a visual language really and carving was how Maori told their history back in the day.”

He’s drawn a tiny black backed gull image into his father’s eye and referenced the Battle of Kokowai between Ngaiterangi and Ngati Ranginui iwi in his mother’s portrait frame. He explained the stories behind these during a public artist’s talk on Saturday, and will be conducting another talk to the Friends of the Gallery.

“I think it will be a good opportunity for people who want to get a bit of an intimate backdrop to who I am as an artist and a person because I’ll be talking through my works.” 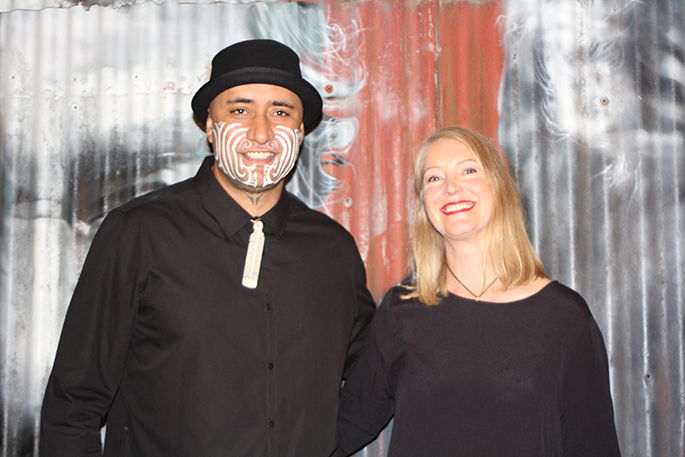 Encouraging others to explore their own connections is why he attended the opening of the show in a Scottish kilt.

“I went to Moffat in Scotland and painted a portrait of my great-great-great grandfather John Alfred Borrowdale Murray on a wall there in his hometown.”

This drive to explore and celebrate family connections and roots wherever that may take him in the world has added to the already enriched treasure trove of his life and help created this moment where he brings it all home.

“The main thing I want to get across with this exhibition is honouring my Tauranga Moana roots and my love for this place.”

Mr G’s ‘Home’ exhibition will be on show until February 9, at Tauranga Art Gallery. 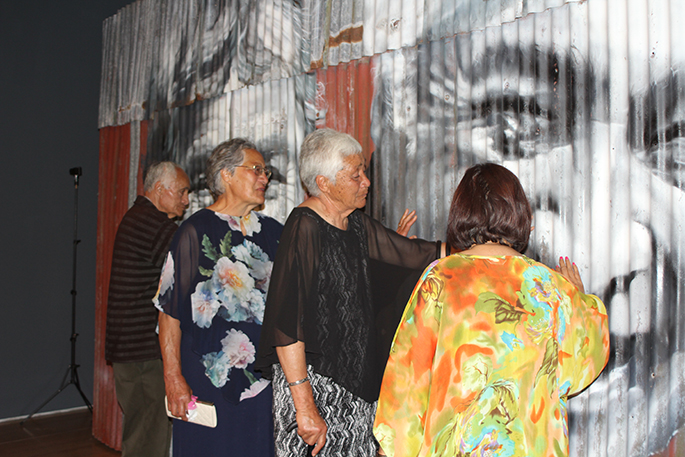 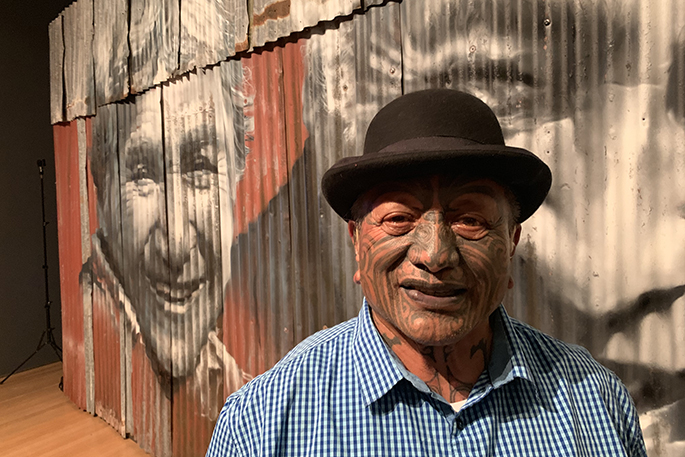