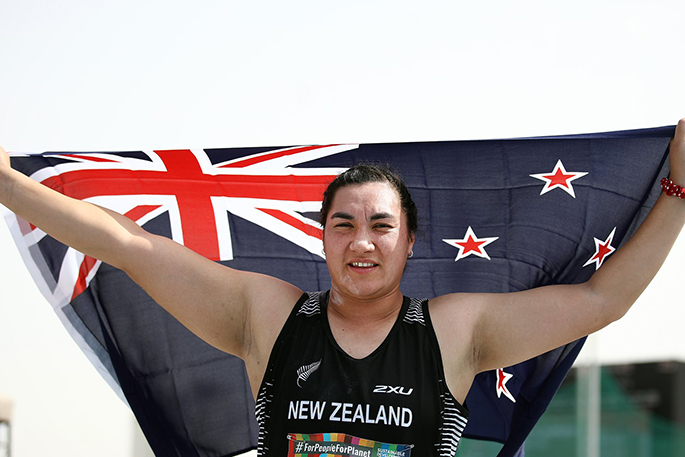 Lisa, who is the younger sister of Olympic champion Dame Valerie Adams, has won gold in the women’s shot put F37 on her international debut.

Lisa, who is coached by double Olympic champion sister Valerie, said she was pretty overwhelmed with the result.

"It's been a hard and fast road. I've been training for a year and a half and this is my international debut,” says Lisa. “There's a bit of confidence out there after today, I had consistency and there are goals that we've made for later on, and this is a stepping-stone for that. I didn't come in with breaking the world record as a goal, so that's kind of a bonus."

Caitlin Dore finished 7th in the shot put F37, with a best throw of 9.50m in the final round, a new PB and Otago record for the Dunedin-based thrower.

Caitlin said she put everything out there. "I had six consistent, good throws, so pretty stoked with the series. Discus is Tuesday night and I am rearing to go, I've really got a feel for it now and am excited."

Lisa and Caitlin will compete in the discus F38 on Tuesday.

Anna Grimaldi also won silver in the long jump T47 - with a jump of 5.5 metres.

Also competing in the morning session on day 3 of the Championships were Anna Steven, who placed 7th in the final of the 200m T64 with a time of 30.33, and Ben Tuimaseve, who had a best throw of 12.08m in the shot put F37 which placed him 12th overall.

"It was an honour to wear the black singlet and it means something to me," says Ben. "It just didn't happen today, but what can you do but get up and move on."