An English oak topples in Katikati 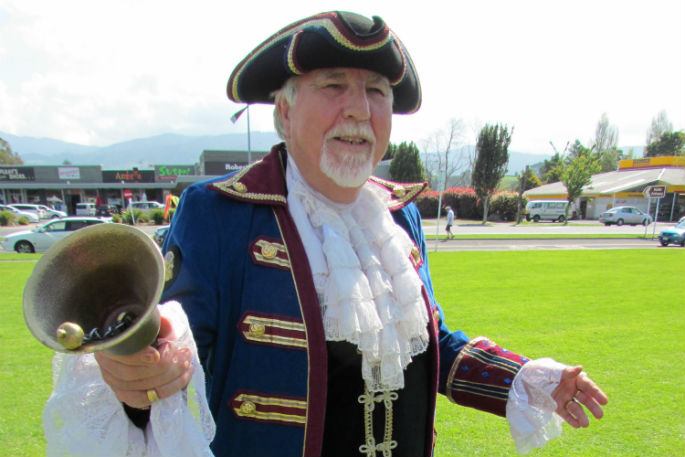 John Groves was a big personality and a big part of the Katikati and wider community.

Perhaps the best-known voice in Katikati has fallen silent. Along with his trademark bell.

Since 2000, the goateed John Groves, in his tricorne hat, gold braided blue jacket and flowing ruffle, pantaloons and white hose, was the self-appointed Katikati town crier – the man appointed to make public pronouncements in the streets. But he has cried his last “oyez, oyez, oyez” – or “hear ye”.

The English oak toppled a week ago and now it’s the turn of the town to make a pronouncement – “Rest in peace John Leonard William Groves”.

“A wonderful presence,” says Dave Eddy, a fellow Katikati Lion. “A tall man with a booming voice, very loud.” Made for town crying and also very imposing in his bespoke uniform. The 86-year-old was a larger than life character in the orchard town.

“Not sure how he got the role,” says Dave Eddy, a fellow Katikati Lion. “Many years ago there had been talk about a town crier and next minute John was it.” Well, the story goes like this.

Katikati was celebrating its 125th anniversary and the tall man with the loud voice was asked to be town crier in a re-enactment of the arrival of the district’s Northern Irish Ulster population. John Groves was then asked to explain his ‘self-appointment’ to the then Western Bay of Plenty mayor.

He reportedly said they “grilled him” and “bashed him with a shovel”, before officially declaring him crier. He even had a document as proof of his appointment.

John Groves was the consummate English gentleman with his own idiosyncrasies. “Always one of the friendliest of guys,” says Heather Taylor of the local croquet club. “He had this delightful habit of approaching everyone individually to shake their hand whenever he saw them at the club. He was a lovely gentleman.”

John Groves took his alter ego across the Bay of Plenty… that big voice booming out at the Mount Maunganui Christmas Parade and myriad of other events. He offered his crier services to Mount Mainstreet, the beachside retail lobby group, they grabbed him and he was a feature of the event for years.

He admitted that being the centre of attention seemed to come naturally.

Two days before John Groves died he called Dave Eddy about arrangements for the Katikati Christmas Parade and Santa in the Park. “He was my right-hand man and even at 86 he was still organising posters, balloons and lollies and all that. On the day he died he called to say everything was in place.

“The day he died he was still giving to the community. It says a lot about the man.”

The town crier who played croquet, organised the lollies and balloons and coloured up people’s lives, also dabbled in art. He was an artist and his water colours were exhibited recently at an art event in the town. “He sold one painting,” says Dave Eddy. “But he was disappointed he didn’t sell more.”

It seems Katikati was lucky to have John Groves for as long as it did. “He walked away from a car crash just outside Katikati. The car was a complete write off, and if you had seen the wreck, you would have wondered.”

John Leonard William Groves was also a man with an opinion and he would use that big voice to express it. “He would have his say if he thought things weren’t right. But he would share those thoughts in a gentlemanly way.” That was this man’s style and he stamped that style on Katikati.

He leaves behind his wife Heather, children Karen, Lynsey and Mark and stepchildren Amanda, Stuart and Sharon.