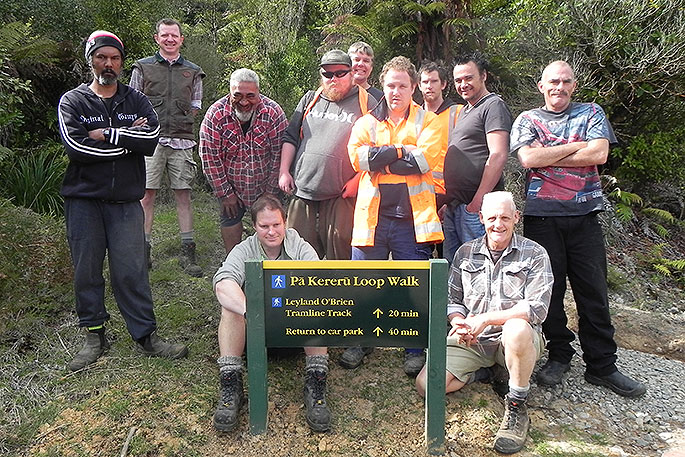 Staff and members of the Mahi Boys programme at the Pa Kereru Loop Walkway.

Sunday November 10 update:  Due to the inclement weather, the Pa Kereru Loop Walkway Opening will be moved from the Blade to inside the Whakamarama Hall at 2pm. All are invited.

The proud culmination of years of hard work by a very special team is how the opening of a new walkway in the Kaimai Mamaku State Forest Park is being viewed.

Sunday’s official opening of the Pa Kereru Loop Walkway, a 40-minute forest walk in Whakamarama, will mark the end of a journey for those on the Mahi Boys work training programme.

It’s a programme with a difference, as all the participants are clients of the Bay of Plenty District Health Board mental health service.

“What Sunday’s opening is all about is honouring the boys for the work they’ve done up here,” says Mahi Boys Programme Team Leader Paul Mason.

“I’m really happy that’s the focus because they’ve done all the hard work and if it wasn’t for these guys that track wouldn’t be there.

“It’s a big thing really. This track was initially thought about back in the 1970s and here it is finally coming to fruition.”

Paul previously worked in Tauranga Hospital’s Mental Health Acute Inpatient Unit. There he observed some patients becoming involved in adverse incidents when bored and inactive. This was the catalyst for The Mahi Boys. 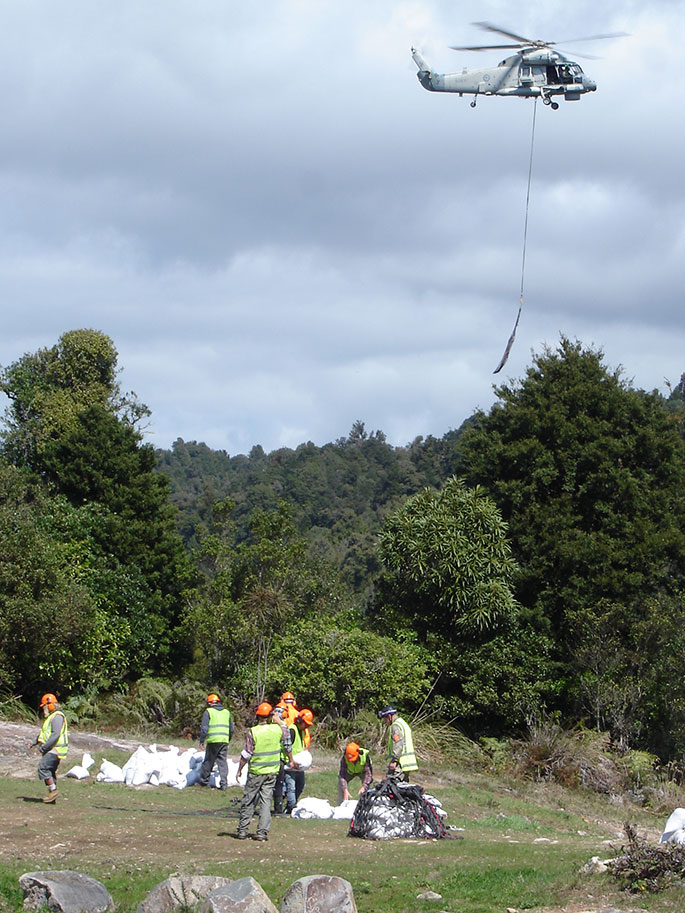 A Navy helicopter helps bring in material for the track in 2013.

“They get a sense of pride from having been out working,” says Paul. “They feel ‘normal’ whatever ‘normal’ means in that when they’re out here doing this they’re just guys working out in the bush, they’re not mental health patients. They learn some great skills. There are a lot of benefits.”

The Mahi Boys programme has worked closely with the Whakamarama Community Inc, who will be hosting Sunday’s official opening, during the construction of the Pa Kereru Loop Walkway.

The backbreaking work they have undertaken on the walkway has included track construction and stabilisation and the building of bridges, walkways and drainage works.

They have used flying foxes to move timber down into the gullies and at one stage a naval helicopter was even employed to help transport some of the tonnes of metal fill required for the track substrate. The rest was taken in by good old-fashioned sweat.

“It’s a pretty cool operation and we get a lot from it,” says Brandon, who has been one of the Mahi Boys for eight years.

“For a long time I was housebound and wouldn’t go outside but being part of this has helped a lot with that, just getting out and meeting new people that I can relate to has been important for me. We’ve achieved a lot in the last eight years.”

Alexander James ‘A.J.’ says working on the track brought a “sense of being part of the community” whilst Rob said it had helped keep him “motivated in life”. Matthew C said constructing the track’s bridges had been “a buzz” and being a Mahi Boy had helped put his “mind on track”. 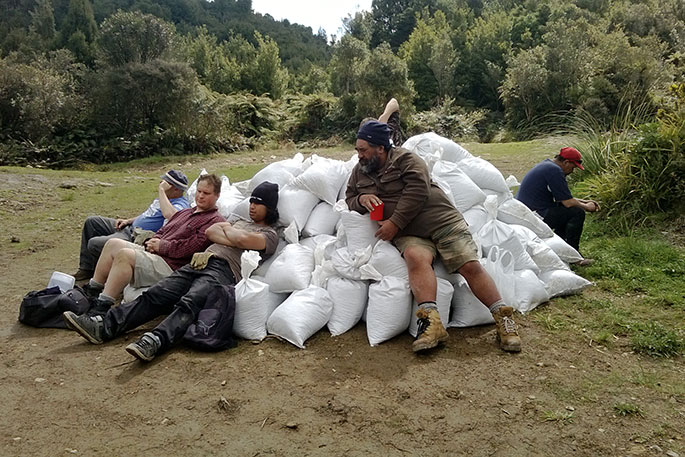 “We’ve come a long way to get to this point, everyone’s put in a lot of effort, and it really does feel like we’ve done a good job with it,” says Geoffrey, who added that the programme had given him motivation and the opportunity of “being seen in life”.

Matthew H has been a programme member for over four years and said it had given him a “strong attitude, better behaviour” and shown him “possibilities to life”. William says the programme gave participants “something rewarding to do” and that there was a sense of pride in what had been achieved.

Around 15 people work on the programme, Monday to Thursday, from 8am-4pm. The team are based in Whakamarama but their work can take them to many parts of the Western Bay of Plenty. The varied work undertaken by members of the Mahi Boys programme enables the development of transferable workplace and social skills. 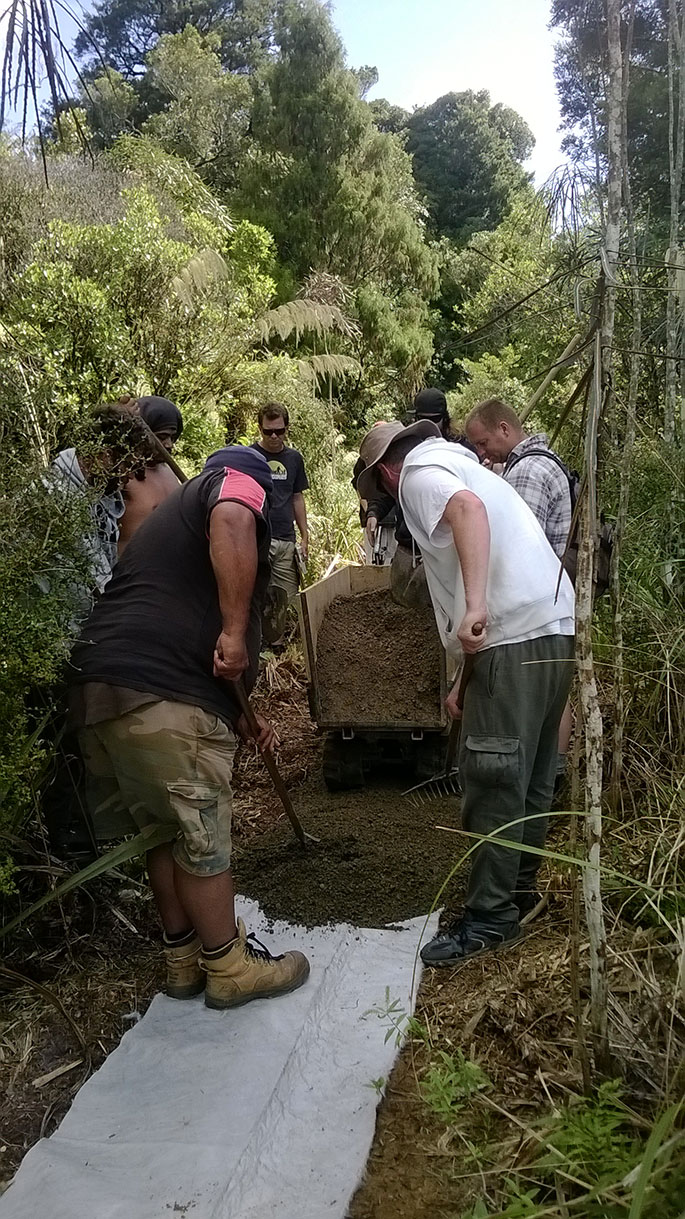 Members of the team at work on the track.

The programme’s success is demonstrated by a decrease in average bed stay, a drop in readmission rates, and an improvement in participants general functioning and health. Some people have also now secured themselves part-time employment in the community.

“Both Paul (Mason) and Pete (Bull) have been tremendous advocates for all the people who have worked on the programme and without their unwavering enthusiasm and boundless energy the work completed may never have happened,” says BOPDHB Community Mental Health Service Manager Michael Joyce.

“All the mahi programme participants are role models to what can be achieved with a can do/will do attitude.”

In case of inclement weather, the opening ceremony will be held in the Whakamarama Hall at 2pm.

Where: ‘The Blade’ car park, end of Whakamarama Road, Kaimai Mamaku State Forest Park. If raining, opening will be held in the Whakamarama Hall, opposite the school.

Who’s invited: All are welcome 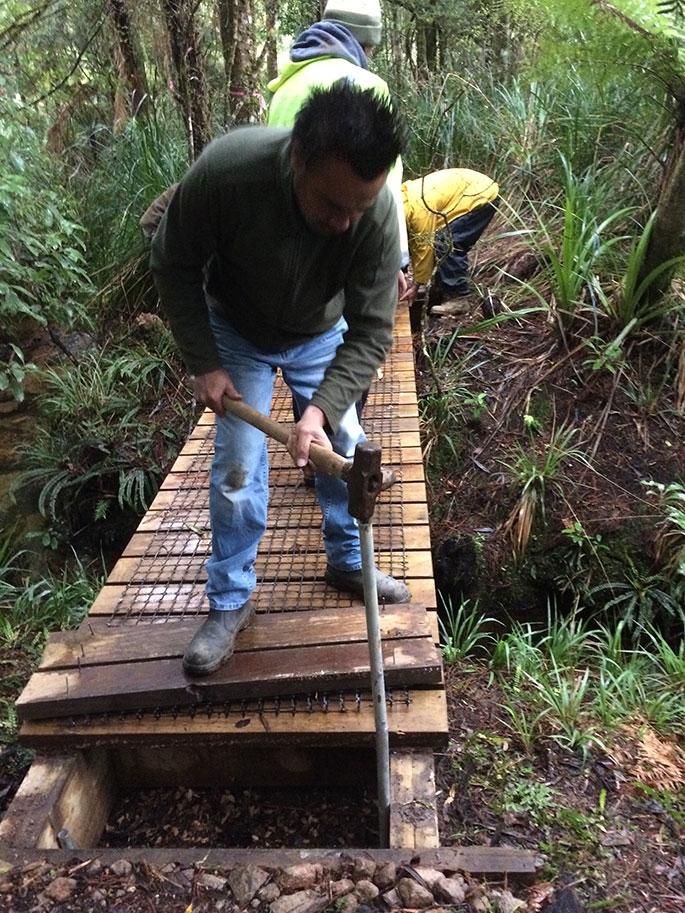 Members of the team at work on the track. 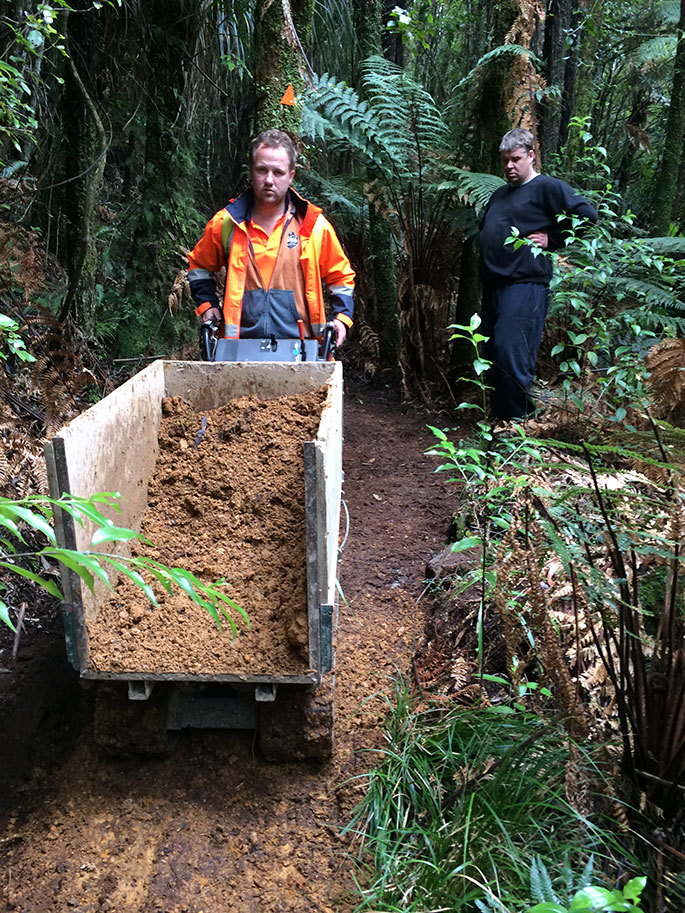