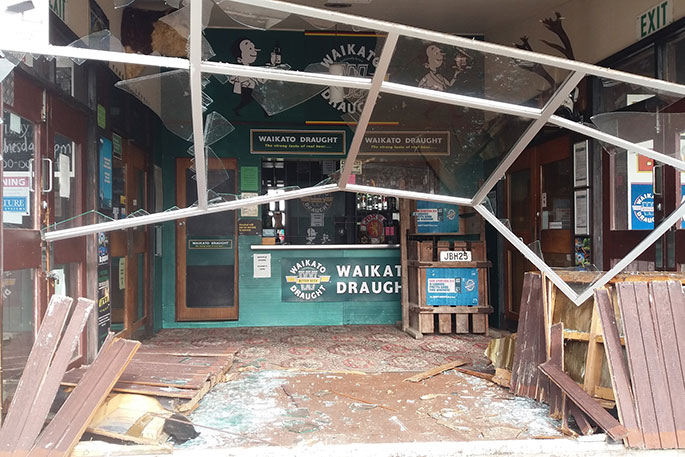 The Tahuna Tavern was caught up in the ram raid, but it still open for business during its normal hours. Photo: Tahuna Tavern Facebook.

Police are appealing for any witnesses to a vehicle which allegedly rammed its way through Morrinsville earlier this week.

A 55-year-old man is facing five intentional damages charges after allegedly driving drunk and ramming into a number of vehicles, including police cars.

The whole incident unfolded when police were called to a family harm job on Morrinsville around 1am on Wednesday.

Acting Waikato district commander Inspector Andrew Mortimore says a man had reportedly been drinking or some hours and was threatening to drive.

When police arrived at the address, Andrew says the man rammed the police car with his own vehicle.

“He made an implied threat to injure Police staff with a spade and a knife, before driving off towards Morrinsville township.

“When at the police station, the man rammed the station gates and multiple Police vehicles, as well as vehicles on the street belonging to members of the public.”

The Police Eagle helicopter was called to assist in locating the man, before the vehicle was seen at the Z station in Morrinsville, where the man rammed another police car.

“An officer fired one shot towards the vehicle, hitting the tyre, before the man left the area.

“With the assistance of the Eagle helicopter, the man was tracked to Top Road in Tahuna, where he was arrested without further incident around 3.20am.”

As part of the investigation, police are seeking any sightings of a silver-coloured Holden Adventra station wagon, registration CSR121, in the Morrinsville, Springdale and Tahuna areas between the hours of 12.30am and 3.30am.

“Police would also like to hear about any damage to vehicles or property in the Eastern Waikato area that night that has not yet been reported to Police,” says a police spokesperson.

Anyone with information is asked to call Police on 105.